Against a backdrop of typhoons and hurricanes hitting different parts of the world, business and state leaders, indigenous groups, and investors gathered at the Global Climate Action Summit (GCAS) in California over two days and pledged to step up their climate commitments to meet the Paris targets and keep warming below 1.5°C. 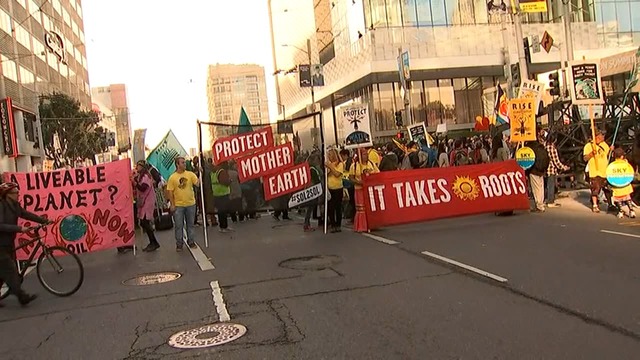 Over 100 Mayors, state and regional leaders, and CEOs committed to become emissions neutral by 2050 at the latest and in line with the 1.5°C degree goal of the Paris Agreement.

More than 400 businesses will set science-based targets. More than 60 CEOs, state and regional leaders, and mayors said they will decarbonise their transport sector by 2030. Many cities, major businesses, state and regional governments committed to net-zero carbon buildings, cutting emissions equivalent to more than 50 coal-fired power stations.

Indigenous groups, state and local governments, and businesses launched coalitions to deliver climate solutions through forests, food and land. Nearly 400 investors managing $32 trillion will work to ensure a low-carbon transformation of the global economy with the urgency required.

The GCAS appears to have demonstrated that momentum is growing. But, according to civil society organisations, the world needs to do more and quicker to meet the climate change challenge and keep warming from devastating whole countries, states, communities and bolstering poverty, migration, diseases and insecurity.

They insist that climate change is faster than mankind and catching up quickly with Hurricane Florence just battering the US Southeast coast and Typhoon Mangkhut currently threatening millions in Southeast Asia. Mangkhut is expected to be as strong as Typhoon Haiyan, which left more than 6,000 people dead in the Philippines in 2013, according to observers.

In the light of the devastating impacts being suffered by people in the Philippines and the US, members of the Climate Action Network (CAN) and partners say it’s not enough and more needs to be done.

They stressed that more sub-national actors must step up globally with tangible commitments that collectively help meet the Paris targets and substantially reduce emissions, bending the curve by 2020.

But most importantly, they added, governments must listen to the terrorised voices of people fleeing Mangkhut and Florence and the calls of the sub-national actors who thet say backed words with action in the California Summit and step up to enhance their nationally determined contributions by 2020 in line with the Paris promise and the ratchet up mechanism.

The Summit closed with a call to action and to inclusive multilateralism to achieve the urgent and required transformative change in societies and economies.

The call to action consists of three asks:

Jennifer Morgan, Executive Director, Greenpeace International, said: “The urgency and pace and scale we need now on climate change means a different level of climate leadership is required. We saw some commitments here at the Global Climate Action Summit from businesses and investors, but what we really need to see are commitments in line with full divestment from fossil fuels. That’s leadership. If you are taking the stage here to talk about your climate commitments, are you following up in your countries, with your heads of government?  Because that’s leadership. And we are lacking for leadership on the national level – with the exception of a few bright spots.”

Sven Harmeling, Global Policy Lead Climate change and Resilience with CARE International: “We welcome the strong signal of urgent action that business, states, cities and civil society sent at the Summit. Climate change impacts are hitting people hard already today, particularly women and girls. Another super storm is threatening people in the Philippines, and people on the US Southern coast face Hurricane Florence. It is time for all government and non-state actors to step up their climate ambition, such as those cities who announced in San Francisco that they would strengthen their resilience and reduce emissions in line with the global goal of limiting climate disruption to 1.5°C. Governments must take the voices from the Summit as a sign of confidence that they can go faster and further with policies that tackle climate change.”

Alden Meyer, Director of Strategy and Policy, Union of Concerned Scientists: “We have seen bold climate action on full display at the Summit these last two days.  Cities, states, businesses, NGOs, and others are charting the path to the transformation of the global economy that is needed to meet the ambitious temperature limitation goals world leaders agreed to three years ago in Paris.  Now we need those leaders to step up as well by strengthening their national commitments under Paris. The ever-increasing wave of powerful storms, floods, wildfires, heat waves, and droughts across the world underscores the huge economic and human costs of inadequate action.

ALSO READ:  Stakeholders react as COP26 is postponed until 2021

“The good news is that the continuing revolution in renewable energy, efficiency, and storage technologies, together with emissions reduction and sequestration strategies in the forest and agriculture sectors, provides us with the suite of cost-effective solutions we need to confront the climate crisis.  All we need now is the political will to take full advantage of those solutions and bring the fossil fuel era to a close.”

Erika Lennon, Senior Attorney, Center for International Environmental Law (CIEL): “At the same time that we welcome the commitments of businesses, states, cities, and civil society at GCAS, we recognize more ambitious action is urgently needed. The devastating impacts of climate change on people around the world are increasing. Three years ago, in Paris the world committed to keeping global temperature rise below 1.5 degrees.

“It is past time for governments to take the action needed to end our dependence on fossil fuels, including by shifting financial support away from the fossil fuel industry. As typhoons and hurricanes batter southeast Asia and the southeast United States, it is increasingly evident that we need rights-based and people-centered climate action, and we need it now.”

Michael Brune, Executive Director of the Sierra Club: “The bold commitments announced at the Global Climate Action Summit are a testament to the strength of American cities, as well as countries around the world, that will not turn away from the crisis of climate change, as Donald Trump would have us do. We know that we cannot stop climate change alone, but together we can take on the challenge. This fight is far from over, and with unprecedented droughts, hurricanes, wildfires, and floods ravaging the globe, it has never been clearer that world leaders must join us in stepping up and facing the demand head on.”