September 28, 2016 Comments Off on Carbon prices too low to adequately reduce emissions 1,217 Views

Current carbon prices are falling short of the levels needed to reduce greenhouse gas emissions driving climate change, but even moderate price increases could have a significant impact, according to new OECD research. 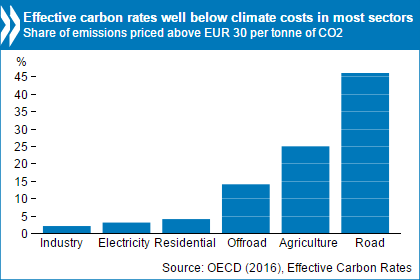 “Effective Carbon Rates: Pricing CO2 through taxes and emissions trading systems” presents new data on effective carbon rates on CO2-emissions for energy use across six economic sectors in 41 countries – 34 OECD member countries and seven partner economies: Argentina, Brazil, China, India, Indonesia, Russia and South Africa. The report finds that there is a major gap between current carbon pricing policies and what is needed to ensure that carbon is priced even at the lower-end estimate of real climate costs – EUR 30 per tonne of CO2.

The effective carbon rate (ECR) is the sum of specific taxes on energy use, carbon taxes and prices of tradable emissions permits, where these apply. Taxes are included on the basis of their economic effects rather than their stated policy intent, meaning that excise taxes are part of the ECR.

Across all sectors and countries, the average effective carbon rate (ECR) amounts to just EUR 14.4 per tonne of CO2, of which 93.1% are excise taxes, 1.3% are carbon taxes, and 5.6% are emissions trading systems.

The report also calculates the indicator for a scenario under which carbon rates and sectoral coverage are increased to the level of the median country rate and coverage in each economic sector.  In this case, if all countries matched the efforts being achieved by the upper half of countries surveyed, the carbon pricing gap drops from 80.1% to 53.1%.

“This new data shows that even moderate collective action to increase carbon prices can make a significant impact in putting countries on a pathway to a low carbon transition,” said OECD Secretary-General Angel Gurría. “Pricing carbon, through taxes or emissions trading systems, is one of the most effective tools for reducing CO2 emissions and tackling climate change. Prices can and do trigger reductions of energy use, improvements in energy efficiency and a shift towards cleaner forms of energy. The challenge is in getting the prices right,” Mr Gurría said.

Other main findings for the 41 countries surveyed – which represented 80% of world emissions in 2012 – include:

Excise taxes are by far the main component of ECRs in all sectors. Emissions trading systems raise average rates in industry and electricity but hardly at all in transport. Carbon taxes only raise ECRs marginally.