August 12, 2016 Comments Off on Campaigners, labour to collaborate on climate change 1,535 Views

Civil society organisations (CSOs) in the country have agreed to work with the Nigeria Labour Congress (NLC) on issues related to global warming, thereby opening a fresh vista in the nation’s climate change policy dynamics and diplomacy. 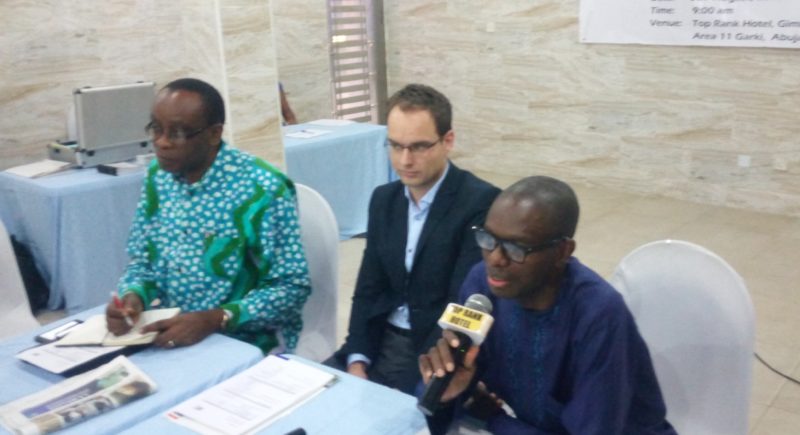 The CSOs, who also resolved to offer their expertise when needed, likewise appreciated the fact that labour unions used to be the political voice of the society and are therefore willing to help in reviving that process.

These resolutions were the outcome of a recent engagement session in Abuja involving CSO and NLC representatives, courtesy of a continental initiative being promoted by the Friedrich-Ebert-Stiftung (FES) in about three sub-Saharan African countries including Nigeria.

Henry Okotie, the FES Nigeria project manager, assured the activists that his organisation would communicate the opportunities being offered by the CSOs to the labour unions, especially the NLC, and will encourage them to make use of them. The NLC representative had left midway into the daylong forum, which also featured representatives from the academia.

Panelists: L-R: Prof. Olukayode Oladipo of the University of Lagos, Dr Jennifer Spiff of the Women Initiative for Transparency, Prince Chima Williams of ERA/FoEN and Priscilla Achakpa of the Women Environment Programme

His words: “The date for the publication and launch of NLC’s Climate Change Policy hasn’t been set yet. We will inform you as soon as we know about it and send the soft copy.

“We will communicate the outcome of the workshop to the NLC and I will then let you know what the plans for future activities in this field are.”

At the opening of the session, Michael Roll, the FES resident representative, expressed the hope that a workable partnership between labour and CSOs would be forged in the bid to address numerous labour/workplace and climate related challenges.

Thereafter, a panel discussion session featuring Prof. Olukayode Oladipo of the University of Lagos, Priscilla Achakpa of the Women Environment Programme (WEP), Dr Jennifer Spiff of the Women Initiative for Transparency (WIT), Nnimmo Bassey of the Health of Mother Earth Foundation (HOMEF) and Prince Chima Williams of the Environmental Rights Action/Friends of the Earth Nigeria (ERA/FoEN) explored a number of issues bordering gender and climate change as well as the legal focus.

ALSO READ:  What if Nigeria was a shining example?

For instance, Dr Spiff noted that women and children/girls are the most vulnerable in cases of climate change impact in the areas of reproductive health rights, epidemic and conflicts. She also shed some light on the role of women in climate change.

Prince Williams emphasised that no law has in fact criminalised the negative impacts of climate change on human life pattern (such as loss of farmland), adding that impact can be linked with constitutional right to life.

He said: “We can bring an enforcement of legal action against climate impacts on us, and those to enforce such rights against are GHG emmiters such as operators in the extractive sectors involved in gas flaring, oil spillage and deforestation.”

Achakpa said: “We need more women organisations in the gender constituency. There is also the need to be involved in data generation. We need to generate our data ourselves.”

According to observers, areas to be addressed in future when the CSO-labour collaboration becomes operational entail how climate change contributes to substantial labour productivity loss, labour’s involvement in the transition to a green economy, and challenging conditions in the workplace due to climate change, among others.