With the approval, the single-cross hybrid also became the first of its kind to be approved in West and Central Africa (WCA).

Nafagnon yields as much as 45 percent higher than popular variety Misari-1. It is more resistant to downy mildew and has higher fodder yield potential.

It is a dual-purpose (grain and forage) hybrid resistant to downy mildew, the most harmful pearl millet disease in WCA. The seed size, yield potential, stay-green and earliness of the hybrid are traits highly preferred by farmers and end users in Burkina Faso, where low yield of pearl millet varieties relative to other cereals is forcing farmers away from one of the best suited crops for Sahel’s harsh agro-ecologies.

Nafagnon is a first generation cross of two genetically different inbreds. Such crosses are called single-cross hybrids. It was evaluated in major pearl millet producing countries of the region over the last three years.

Tailored to the region

“The first hybrid millets that were tested in West and Central Africa were bred in India. Unfortunately, they were too early maturing and susceptible to downy mildew disease. Learning lessons from those assessments, ICMH 147007 was developed, evaluated and selected in the WCA region,” said Dr. Gangashetty, millet breeder for ICRISAT-WCA, Niger.

“It is well adapted to West African environmental conditions,” added Dr. Inoussa Drabo, pearl millet breeder at INERA, who led the evaluation of multiple hybrids and selection, and provided the necessary documentation for the release of Nafiagnon in Burkina Faso.

“Since the 1990s, researchers at national research institutes and research organizations such as the International Crops Research Institute for the Semi-Arid Tropics (ICRISAT) and the Alliance for Green Revolution in Africa (AGRA) have been working to obtain millet hybrids,” explained Dr. Issoufou Kapran, Seed System Specialist at ICRISAT-Mali.

“The strong research for development partnership between ICRISAT and INERA has been benefiting smallholder farmers in Burkina Faso. Nafiagnon, the first hybrid, is another important contribution to improve the livelihood of farmers,” said Dr. Ramadjita Tabo, Regional and Research Programme Director for ICRISAT-WCA.

INERA’s approach to millet hybrid development and commercialization in Burkina Faso involves partnerships with farmers and the private sector. Nafiagnon was tested by more than 500 farmers and three seed companies – NAFASO, FAGRI and EPAM – were involved. “The evaluation of pearl millet hybrids in Burkina Faso was taken up under the AVISA Project,” said Dr. Neya James, national coordinator of the project that is funded by the Bill & Melinda Gates Foundation.

Mr. Ladji Sawadogo, a farmer in the village of Balla that is about 40 km from Bobo Dioulasso, planted Nafagnon along with the local variety on the same day on one hectare of land.

“I am impressed by how fast hybrid plants grow. Its leaves remain green at maturity and the grains are well formed and filled on the panicles. Not only will my family have enough to eat, but animals will also have enough to feed,” the farmer said.

Following its approval in Burkina Faso, Nafiagnon will soon be included in the next seed catalog of the Economic Community of West African States (ECOWAS). The hybrid resulted from the activities of HOPE-2 project, funded by the Gates Foundation, HarvestPlus, GIZ, CGIAR Research Program Grain Legumes and Dryland Cereals, INERA, seed companies such as NAFASO, FAGRI and EPAM in Burkina Faso.

Previous: 1.5°C could be reached in next five years – WMO
Next: Nigeria inaugurates committee to protect ozone layer 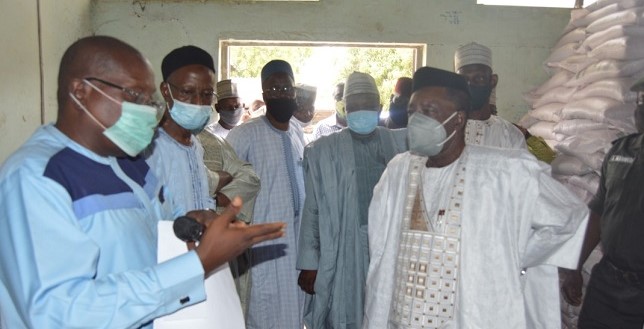