December 6, 2018 Comments Off on Buhari’s major principles on climate change, by aide 752 Views

In the light of the ongoing 24th Session of the Conference of the Parties (COP24) to the United Nations Framework Convention on Climate Change (UNFCCC) in Katowice, Poland, Garba Shehu, Senior Special Assistant to President Muhammadu Buhari on Media and Publicity, attempts an overview of Mr President’s presence at the global summit, even as he sheds some light on the leader’s ideologies on the topic of discussion 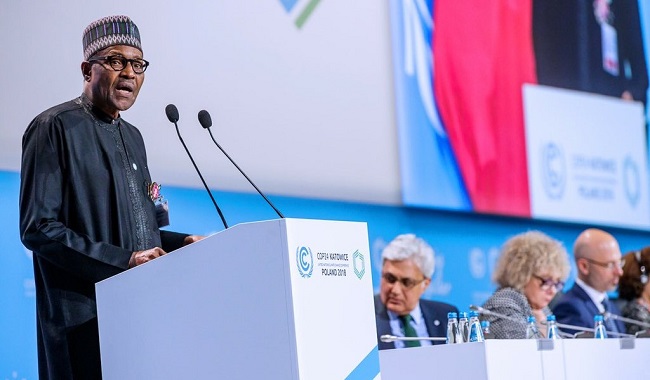 This year’s annual conference of the Parties to the UN Framework Convention on Climate Change (UNFCCC) is currently taking place in Katowice, Poland. It opened on December 2nd and will run until the 14th.

There are about 22,000 delegates from 200 countries at the conference, including President Muhammadu Buhari who joined other world leaders for the high-level meeting on December 2 and 3.

As an aside, the choice of Katowice by the Polish hosts of the conference is a deliberate one, aimed at bringing home the lessons of the devastation caused by climate to the global environment.

Katowice is the coal mining and steel making stronghold of the country. Coal powers 80 per cent of Poland’s electricity, on account of which Katowice is the 36th of Europe’s 50 most polluted cities.

Smog, manifesting air pollution can get so bad that it would sometimes be difficult to breathe.

It’s perhaps on account to avoid the air that many delegations chose to stay in Kraków, a distance of 80.4 km (some one hour-drive) from Katowice, for their residency while attending the conference.

Beyond this, there is everything positive to say about infrastructure in both cities, much of it put in place during the communist era, attesting to claims that in some ways, communism did work for the people.

Tagged “COP24” in UN parlance, this meeting had the objective of drawing up final rules and guidelines for the implementation of the Paris Agreement on Climate Change. When it is agreed to, it will enable the Agreement to be put into practice all around the world.

The Paris Agreement was adopted in December 2015. The global action plan set out in Paris is to put the world on track to avoid dangerous climate change by limiting global warming to well below 2°C above pre-industrial levels, and pursuing efforts to limit the temperature rise to 1.5°C.

The agreement came into effect on November 4, 2016 and has since been signed by nearly 200 counties including Nigeria.

Signatories also include the United States, Australia and Argentina, three countries that are now reversing their acceptance of the terms of the agreement.

In the specific case of Donald Trump’s America, he doesn’t even believe that global warming has a connection with carbon emissions, a sin visited on the world by rich, industrial nations led by America.

This year’s climate conference came at a time of growing concern about the deteriorating global climate situation. It has been determined that in carbon dioxide levels, the year 2017 was the highest they have been in 3-5 million years.

According to the National Agency for Space Administration, NASA, 2017 was the second-hottest year globally since 1880; the Arctic was warming twice as fast as anywhere else on earth in 2017 and sea levels are rising at the fastest recorded rate in 2,000 years.

As enunciated by President Buhari in his speech at Katowice, the consequences of this are seen in the rising global temperatures, erratic rainfall, sand storms, desertification, floods, cold waves, low agricultural yields and drying up of water bodies.

“It is no surprise that the effects are felt more on the vulnerable communities that lack the capacity and technology to properly address such challenges,” he said.

In that speech, President Buhari made it clear that we in Africa contributed little, if any to the climate change menace but were suffering its consequences.

He graphically cited the case of the Lake Chad, down from 25,000 square kilometres to 2,500 sq. km, ten per cent only of its established size and with that, jeopardising the livelihoods of 40 million inhabitants of the basin found in Nigeria, Niger, Chad and Cameroon.

The consequences of these on the ecosystems are extreme poverty, the displacement of people, and support for banditry and terrorism.

In calling for international support to recharge Lake Chad with waters from the Congo Basin in Central Africa, President Buhari made clear that Nigeria remains committed to saving the Lake from possible extinction.

In search for solutions, he revealed that an International Conference held earlier in February this year in Abuja has helped in creating additional awareness globally on the serious environmental and security challenges facing the Lake Chad region.

Furthermore, he said, “A consensus was reached at the said Conference to the effect that an inter basin water transfer from the Congo Basin remains the most sustainable option available to resuscitate and safeguard this precious water body that was once the 6th largest fresh water Lake in the world.”

The President also did his duty of projecting Nigeria as a responsible nation-state, playing by international rules, taking upon herself the ambitious “Nationally Determined Contributions” targeted to reduce its greenhouse gas emissions up to 20 per cent by 2030 and, given international support, by 45 per cent in 20 years.

It is clear that the Nigerian leader has cast himself in the role of an activist and global environmental champion to the admiration of many including Antonio Guterres, the UN Secretary General.

His support for the Paris Agreement is unmistakable, partly on account of his view of it as a vehicle for the remission of past ills visited on the environment that led to the consequences of climate change imposed on Nigeria and other African countries.

He sees the risks to our farmers who are involved in frequent deadly attacks against each other with herders; he is concerned about rising oceans that threaten our communities along the thousands of kilometres of coastline; he knows first-hand, the damage from the desert encroachment, forcing millions of our citizens into climate migration.

His determination to make a difference is driven by a strong sense of mission, to do something about the dangers now or confront a bigger calamity in the years to come.

He has an interesting narrative from the Magazine, National Geographic he read about 40 years back, in which a report was made of a research by a UK scholar around 1925 warning as at that time that Lake Chad needed an infusion of waters from the Congo Basin or else it would dry up.

Because nothing was done to forestall this, Lake Chad is today 10 per cent of its original size and, receding even more.

For him, therefore, the adoption “of a strong Paris work programme, with clear provisions on all key issues including transparency, finance, mitigation and adaptation,” is a key priority as it is for the European Union and other countries.

When it comes to the assumption of responsibility for the work that needs to be done and who pays for it, President Buhari as do many other activist-leaders, hold the view that since the developed countries have been the major polluters over the years, and they are not in any way denying that, they should assume a greater role in fighting global warming.

One of these ways includes the Green Climate Fund established by the Paris Agreement into which they would make an annual payment of USD 100 billion to help lift up the less developed countries suffering the consequences of climate change. President Buhari said African countries must draw from this fund for the restoration efforts to make the needed impact.

For us in Nigeria however, the President made it clear that we are not resting on our oars, waiting for manna to fall from heaven, but rather promoting technologies and practices such as sustainable land management, climate resilient agriculture, water efficiency and clean energy.

“We have also developed insurance-based initiatives to deal with losses and damage, as well as adaptation to internally acceptable practices,” he told the UN Climate Change Conference in Katowice.

Some of the specifics in this regard include: the determined efforts to end gas flaring in the Niger Delta, ahead of the stated schedule; provision of solar power up to 13,000 megawatts; efficient energy through mass transit and reduction of cars and the improvement of the electricity grid system.

The President also mentioned the successful take-off in the Nigerian Stock Exchange of the green climate bonds to help us fund renewable energy and reduce carbon emissions.

These steps as choreographed by President Buhari, had the effect of presenting Nigeria as a nation acting responsibly within the global community. If every country would do their part in a responsible way as we are doing, the world would have been saved, in 2017 alone, of disasters triggered by weather and climate-related hazards to the cost of $320 billion.

The UN says these economic losses will increase and will have a bigger impact on the lives and livelihoods of the poorest and most vulnerable, and that by the year 2030, climate impacts could push an additional 100 million people into poverty.

The statistics also show that by 2050, as many as 143 million people could become climate migrants in just three regions (sub-Saharan Africa, South Asia and Latin America), with individuals, families and even whole communities forced to seek more viable and less vulnerable places to live.

Beyond his very engaging participation in the conference, the President used his presence in Poland to advance the country’s international relations by holding separate bilateral meetings with the President and Prime Minister of Poland, both of whom talked about their investment plans for Nigeria; the President of Austria who expressed a strong support for the recharging of Lake Chad; the Prime Minister of the Netherlands with whom the Nigerian leader discussed matters of investment, the reform of our livestock and farm agriculture; and the President of Switzerland whose country had done so much, and is expected to do more in helping us to secure the release of the remaining Chibok girls and other hostages seized by Boko Haram.

As he did in every country he visited, President Buhari met the Nigerian community who asked so many questions including the one on his alleged cloning, a question he considered laughable and dismissed as incredible.

When, at the end of the interaction they asked him, “What do you want us as Nigerian citizens to do for you?” The President answered to a thunderous ovation: “Vote for me!”

In a mark of international statesmanship, President Buhari ended his engagements in Poland with a visit to Auschwitz, described as the largest concentration camp established by the Nazi regime in pursuit of the “Final Solution.”

One million and three hundred thousand (1.3m) people, 90 per cent of them Jews were exterminated mostly in gas chambers by the Nazi occupiers during World War II.

His visit has been marked as a gesture to the global and domestic audiences.

In solemnity, President Buhari entered some of the detention camps, the execution wall and walked through the remaining gas chamber still standing in the camps.

He laid a wreath in honour of the dead and signed the condolence register in which he wrote, quoting Shakespeare that the “evil that men do lives after them…”

Auschwitz-Birkenau had a sobering effect on President Buhari as well as members of his delegation that included the Governors of Enugu, Kogi and Niger states

The visit showed the essential Buhari to the world: Kind, gracious and considerate, a leader who at every given opportunity pledged commitment to complete freedom of faith, but one who, ironically, is questioned in his motives by people he dismissed as “illiterates and ignorant.”