Protesting at the Brazilian National Oil and Gas Agency headquarters, activists pressure the government for more transparency and responsibility, and highlight the impacts of oil and gas exploration on climate, biodiversity and traditional communities 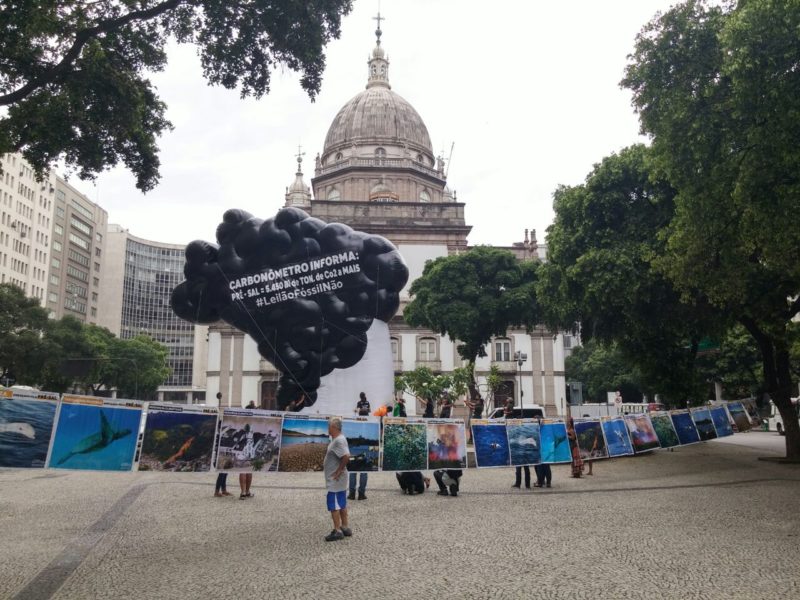 Activists protesting in front of the headquarters of the National Oil and Gas Agency (ANP), in Rio de Janeiro

The Brazilian government’s current move to reopen the oil market as an alternative to raise the country’s economy has rekindled criticism from civil society and raised questions about Brazil’s ability to meet the goals set out in the Paris Accord.

Activists from 350.org Brazil protested on Thursday, October 26, 2017 in front of the headquarters of the National Oil and Gas Agency (ANP), in Rio de Janeiro, demanding greater transparency and dialogue with the communities directly affected by the blocks, and for more coherence with regard to national energy policies.

On Friday November, 27, ANP is set to hold two more rounds of bidding for oil and gas exploration; this time, in the deep pre-salt layers. In total, eight areas in the Santos Basin, located between the states of Rio de Janeiro and São Paulo, will be auctioned off during the 2nd and 3rd Rounds.

Activists took the demonstration to one of the largest avenues in the centre of Rio, and inflated a giant black balloon to represent the pollution and amount of carbon that will be emitted from the exploration.

“Our true wealth is at stake here,” said Nicole Figueiredo de Oliveira, director of 350.org Brazil and Latin America, pointing at a photo exhibition that also formed part of the demonstration. The exposition showed the threatened species in the areas of the blocks and portrayed natural disasters that could be aggravated by the intensification of the climatic changes caused by these activities.

“By prioritising investments in fossil fuel exploration and ignoring the direct impacts on biodiversity, the Brazilian government is showing total disregard for the climate, and for the promises they’ve made under international commitments like the Paris Accord. Worse, by opening new doors for companies that have been exploiting our resources indiscriminately for decades, they disrespect the most fundamental rights of diverse populations. No more walking backwards! We want a fair transition to a renewable energy-powered future, free from the trail of destruction that accompanies the fossil fuels!”

There are 10 companies confirmed for the 2nd Round and 14 for the 3rd Round. Many of them are the same companies interested in the blocs of the 14th Round, which happened exactly one month ago. Among them are big names in the international oil sector, such as Shell, ExxonMobil, Repsol, Petronas and BP. Exxon, the undisputed winner of the latest auction, promises to enter with force again in the next rounds in an attempt to replenish its reserves, which have slumped in recent years on account of the drop in the price of the oil barrel.

The pre-salt areas are offered under a profit-sharing regime, where part of the profit from production goes directly to the Union. These will be the first auctions after the approval of a law that releases the obligation of Petrobras’ participation in at least 30% of the activities in these areas. This time, Petrobras opted to be an operator with a 30% stake in the blocks of Campo de Sapinhoá, to be offered in the 2nd Round, and also with 30% in the blocks of Peroba and Alto de Cabo Frio – Central, both in the 3rd Round.

Emissions and risk to biodiversity

Estimates indicate that the entire pre-salt layer may hold some 80 billion barrels of oil in reserves, placing Brazil among the world’s top ten producers. But the exploitation of these reserves and the burning of all that fuel will also raise the country’s position in the ranking of the biggest climate villains as it would significantly increase greenhouse gas emissions.

Just two of the blocks offered in the 3rd Round – Peroba and Pau Brasil – could release about 5.4 billion tons of CO2 equivalent in the atmosphere. In addition, the oil extraction mechanism alone already causes a lot of damage. The deep sea counts on a great concentration of carbon. Retained in the pre-salt layer for millions of years, on a geological scale, the carbon monoxide will be transferred to the surface in just a few decades. The emissions estimated only for this amount of CO2 present in the reservoirs exceed 3 billion tons.

In addition to putting the country at the top of the list of the world’s largest polluters, exploring the deep layers of the pre-salt also endangers many marine species, such as the Jubarte and Cachalote whales, and one of the symbols of the state of Rio, the Grey Dolphin (‘Boto-cinza’). “There are several overlapping of the blocks with the habitats of endangered species, which are highly sensitive to sound waves and can be strongly affected by seismic tests,” said Nicole Oliveira.

Hydrocarbon exploration and production activities may also result in a considerable intensification of conflicts with the fishing fleets. Not to mention the risk of a spill accident on the high seas, whose impact may reach a much larger area than the polygon of the blocks, including coastal areas, where other endangered species are also found.

“At a time when there is so much talk about sustainable development and the use of clean energy, it is unacceptable for the Brazilian government to take a completely contradictory stance and insist on investing in a process that brings so much damage. Following this path would make it simply impossible for Brazil to reduce its carbon emissions in 30% by 2020, as promised. This goal requires immediate abandonment of fossil fuels. But it seems that the Brazilian government has forgotten that part,” said Juliano Bueno de Araujo, climate campaigner at 350.org Brazil and founder of the No Fracking Brazil Coalition.