Bonn talks: Nations step up to enhancing ambition to keep warming below 1.5c

May 8, 2018 Comments Off on Bonn talks: Nations step up to enhancing ambition to keep warming below 1.5c 830 Views

Front-runner countries and civil society representatives have presented a concrete road-map of how they are enhancing climate plans by 2020 in an attempt to push other states to commit to doing the same at the upcoming UN Climate negotiations (COP24) that will be held in December 2018 in Katowice, Poland. 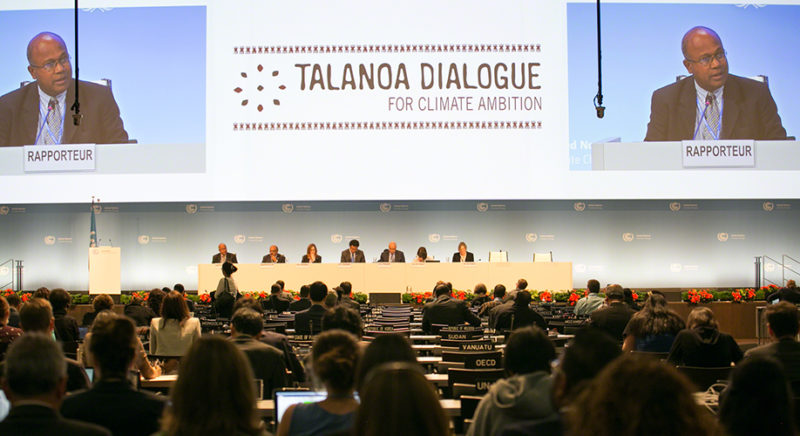 Participants during the report back of the Talanoa Dialogue. Photo credit: IISD

This came during an event organised on the sidelines of the intercessional UN climate negotiations session in Bonn, Germany.

The negotiations underway in the German city have witnessed the first meeting of the Talanoa Dialogue launched by the Fijian Presidency of COP23 to spur an outcome for enhanced ambition at the end of this year at COP24.

Year 2018 can make it or break it for climate change, experts say, adding that the main pillar of the accord the ratchet up mechanism of the Paris Agreement passes through its first test. They insist that countries need to send a clear signal in COP24 that they will enhance their Nationally Determined Contributions (NDCs) by 2020 if the goal to keep warming below 1.5C is to be reached.

Angeline Heine, National Energy Planner, Ministry of Resources & Development, Republic of the Marshall Islands: “As the Paris Agreement requires, every country must update their targets every five years and we agreed to come back to the table in 2020 to do just that. If we are to keep the goals of the Paris Agreement alive then every country must step up their ambition, and the Talanoa Dialogue provides us a unique opportunity to understand how to do just that.

“The Marshall Islands is committed to leading by example. We are already working on a new and more ambitious NDC, informed by a transformational 2050 Strategy that will set us on a clear path to net zero emissions.

“Like us, every country should now be doing the hard work back home to assess what is possible, with a particular eye to the UN Secretary-General’s Climate Summit in September 2019 which must focus on raising ambition of NDCs and production of 2050 decarbonisation strategies by all countries.”

Stephanie Lee, Special Advisor on Climate Change, Ministry of Foreign Affairs & New Zealand: “One of my takehomes from Talanoa was how great it was to hear stories of ambitious climate action and comprehensive policy-making coming from across the spectrum of parties and non-state actors. The process validated the efforts, perhaps even celebrated them. I believe this kind of dynamic is really important to inspiring greater action and ambition. We know the gap between where we are and where we need to be is stark. But visibility and positive reinforcement of what is already happening can provide new ideas and inspire greater effort.

“In New Zealand, the effort now is on developing policies both to ensure that we meet our target, and to set New Zealand on a long-term trajectory. We see the future as one of transformational change, moving to an economy that is sustainable, inclusive and productive. The concept of a just, well-managed transition is at the heart of this, and is the focus of a significant work programme that reaches across government including into our economic strategy. Why I mention this in terms of achieving ambitious commitments, is that without a just transition that brings people and business along with it, the political consent environment for ambition won’t be sustainable.

“A major focus for New Zealand policy makers this year is to develop a Zero Carbon Act to set us on the path to a low emissions and climate resilient future. The objective is to set a 2050 target which is consistent with the IPCC’s findings and with the Paris Agreement objectives, and demonstrates that we are taking the lead as a developed country. We’re also working on long-term low emission pathways which will inform the communication or update of our NDC is 2020, in line with the Paris Agreement.  Having a clear eye on the long term target can help countries genuinely assess their 2025 or 2030 target to see if they are in line with the long term transition pathway.”

Rolf Smeets Director of Global Public & Government Affairs Philips Lighting: “Energy efficiency offers significant potential, making it an indispensable component of all NDC’s. All sectors combined (appliances, buildings, industry and transport), energy efficiency can contribute to at least half of the mitigation commitment of all countries that signed the Paris Agreement. The global transition to LED lighting alone will bring an annual reduction in carbon emissions of 1400 megaton and reduce energy bills by over 270 billion Euros.”

Marcel Beukeboom, Climate Envoy, Kingdom of the Netherlands: “The science is clear: we need to get into higher gear to reach Paris goals and we need to have the courage to go beyond traditional politics. Meeting in the middle is no option this time”

Senator Loren Lagarda Chief of Delegation – Philippines: “A low carbon economy is critical to reaching inclusive development goals and reducing climate vulnerability. We need to use tools we already have by fostering truly competitive markets that can deliver more affordable, secure and more reliable renewable power for all.”

Paula Caballero Global Director Climate – World Resources Institute: “The Talanoa Dialogue is beginning to lay the groundwork for the constructive political discourse that we need leading up to the UN climate summit in Poland. At the UN summit, countries need to send a clear signal that they will enhance their national climate plans by 2020. We are looking to the Polish presidency to demonstrate leadership by rallying countries towards achieving this outcome which will propel the world towards a much safer world.”

Alden Meyer, Director, Strategy and Policy, Union of Concerned Scientists:  “I would say that COP24 in Katowice is probably the most critical meeting since Paris. The world will be watching to see if countries are serious about implementing and strengthening the Paris Agreement. We have a mandate to adopt a package of rules to implement the Paris agreement across a range of issues. Those rules are essential to build confidence and trust in the system and facilitate greater ambition by both developed and developing countries.

“Second, we need some clear political signals and a process going forward from COP24 on ways to enhance the ambition of the nationally determined contributions that countries have submitted under Paris. We don’t’ have to wait for the IPCC special report in October to know that what’s on the table now and being implemented falls far short of what’s needed to stay on track with temperature goals that countries agreed to in Paris. And we have to figure out how to capture the very constructive spirit of the Talanoa Dialogue groups here on Sunday going into the political phase of the Talanoa Dialogue process in Katowice. “

While the Bonn meetings have seen countries engaging substantially on all fronts, actual progress on some issues seem to be lagging. This includes the vital question of finance.

Tracy Carty, Climate Change Policy Lead, Oxfam International: “At the end of this year there is going to [need to] be agreement on finance accounting rules. It’s very technical but what we’re talking about there is the rules that will govern what counts towards the $100 billion commitment and these rules really need to build confidence that that commitment will be met in a way that is fair and in a way that is robust. And one of the key things on that front is it needs to include a commitment to grant equivalent accounting. And that’s a major issue because loans make up a massive portion of climate finance. In 2016, Oxfam estimates it was around two thirds and the vast majority of that was being counted at face value not taking account of repayments or interest paid and our estimate is that essentially amounted to an overstatement of the net assistance to developing countries by around $20 billion per year.”

There are still sharp political differences to be overcome that have a potential to be carried forward in upcoming ministerial moments.

Li Shuo, Senior Climate & Energy Policy Officer, Greenpeace: “As negotiations enter the second week, the progress and challenges for various rulebook issues are becoming clear. In general, Bonn has managed to advance these issues, but the different features of these issues also require tailor-made solutions. Finance and NDC would benefit from higher level political attention. Transparency will require more negotiation time. Other issues such as compliance and Global Stocktake are ready to move into text based negotiations.

“As the session approaches its conclusion, a way forward is needed to transition the process from a technical to a political phase. The COP Presidencies have a unique role here in steering Parties out of the technical ‘forest’ towards a clear agenda for next session and a shared vision for Katowice.”