May 8, 2018 Comments Off on Bonn talks: Espinosa says developed nations will deliver on finance commitments 1,052 Views

Negotiators and other interest groups at the ongoing UN climate change talks in Bonn, Germany, have been attempting to answer three questions – Where are we? Where do we want to go? How do we get there? 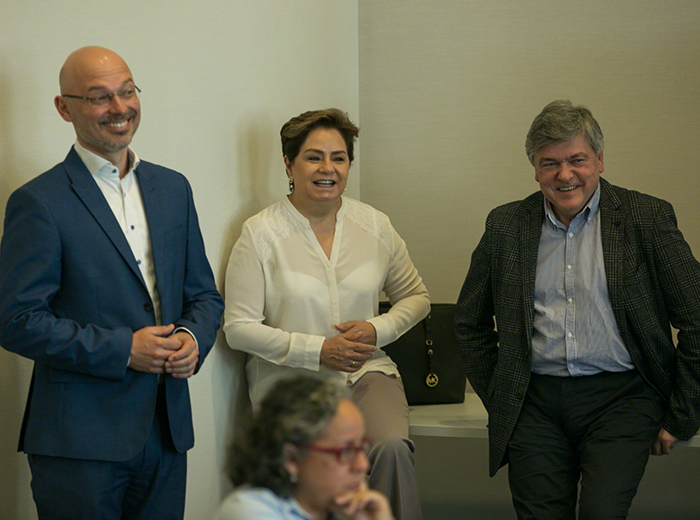 The process of answering these questions has been termed the “Talanoa Dialogue”, a Fijian concept of non-confrontational approach to finding solutions to deliver on the Paris Agreement on climate change.

UN climate chief, Patricia Espinosa, at a media round-table, described progress at the talks as mixed, though “the general atmosphere is very positive”.

She observed that “people have come to the negotiations with the willingness to engage in the substantive issues that are before them”.

Climate finance is emerging as one the biggest issues in the negotiation process, in the quest to answer the question of “how do we get there?”

In addition to national emissions reduction targets, developed countries have made a collective promise of $100 billion a year of climate finance by 2020.

But poor and developing countries have their skepticism in the commitment to deliver on the promises to enable their vulnerable economies adapt to the impacts of climate change and redress the damages.

“Countries who have done the most to cause the climate problem must step up to deliver action and finance. They mustn’t delude themselves that distant technologies will solve the climate problem in the future, letting them off the hook for climate action now,” said Teresa Anderson of ActionAid International.

The Africa Group of Negotiators has submitted that “we need to go to a world where developed countries stop making promises but live up to their promises”.

According to the group, financial support should include access to clean technology and expertise, and a significant increase in money from public sources and not simply offload finance to the private sector.

“We call on governments to lay the ground for stronger ambition to honour the Paris climate pact,” said Kimbowa Richard of Uganda’s Coalition for Sustainable Development.

Three years after the adoption of the Paris Agreement, there are expectations among many countries for clear indications how the $100billion climate finance will be delivered.

Patricia Espinosa acknowledged there are technical issues in negotiating climate finance but “I don’t see any denial of the commitments that have been made”.

She noted: “The principle that developing countries need to be supported in order to deliver on their commitments under the Paris Agreement is absolutely unquestioned”.

Investors are using the climate risk assessment as guideline for the decisions they will be taking, says the UNFCCC.

“Now the truth is that even those 100 billion will not be enough to financing the big transformation that is required in this agenda,” said the Executive Secretary of the UNFCCC.

Espinosa therefore believes the willingness for compliance will need to move beyond the UNFCCC process, by exploring the bigger picture in the implementation of the roadmap.

Outcomes of the Bonn Climate Talks would define progress to be made at the COP24 climate summit in Katowice, Poland later this year.