October 9, 2020 Comments Off on Board considers Clean Development Mechanism beyond 2020 587 Views

With the second commitment period of the Kyoto Protocol coming to a close at the end of 2020, and in the absence of higher-level guidance, the Executive Board that oversees the Clean Development Mechanism (CDM) spent a majority of its 107th meeting discussing the implications of the postponement of the sixteenth session of the Conference of the Parties serving as the meeting of the Parties to the Kyoto Protocol (CMP 16) on the operations of the CDM after the second commitment period.

At the close of the meeting on Tuesday, October 6, 2020, and although options were identified and progress made throughout discussions, the Executive Board decided to continue further discussions on the issue at its next meeting before the end of the year.

Mr. El Hadji Mbaye Diagne, Chair of the Board, said: “Even if the Executive Board has not reached a clear outcome yet, I am quite proud to say that this meeting has been particularly intensive, counting on the full engagement of all members, in spite of the virtual nature of the meeting and its spread over a couple of weeks.

“The discussions were constructive and allowed for ideas and options to be developed and continually improved and narrowed down. I am confident that our next meeting will allow us to clarify how the Executive Board can guide and support the CDM’s operations, while waiting for the much needed CMP guidance we are to get at the end of 2021.”

The highest decision-making authority of the Kyoto protocol – the Conference of the Parties serving as the Meeting of the Parties to the Kyoto Protocol (CMP) — was scheduled to meet in conjunction with COP26 in Glasgow in November this year. However, due to the Covid-19 pandemic, COP26, and thereby also the sixteenth meeting of the CMP, has been postponed until November 2021.

This leaves the CDM Executive Board without the possibility to receive guidance from the CMP before the end of the 2nd commitment period on operations of the CDM with respect to registration and renewal of crediting periods of project activities and programmes of activities (PoAs) with a crediting period starting on or after January 1, 2021, and issuance of certified emission reductions (CERs) related to emission reductions or removals achieved on or after January 1, 2021.

Some of the operational criteria for the CDM are defined for each commitment period. Specifically, these criteria include means by which to estimate emission reductions and removals, how to technically issue CERs into the Kyoto Protocol registry infrastructure, and what modalities and procedures are to be applied for the different types of projects.

A number of CDM stakeholders had also made submissions to the CDM Executive Board ahead of the meeting, requesting clarification of the CDM situation after the ending of the second commitment period, either generally or for specific requests/cases submitted for processing.

Against this background, the CDM Executive Board conducted their discussions, trying to find a common approach that would provide clarity to CDM stakeholders about how the CDM will operate with respect to activities with crediting periods starting on or after January 1, 2021 until the CMP has provided further guidance. Throughout the meeting, the Board evaluated options for how the above issues might be addressed, but without being able to come to a conclusion at this meeting.

At the meeting, the Executive Board also completed a number of additional issues, including taking note of the closing of the CDM loan scheme, of work updates from the CDM Accreditation and the CDM Methodologies Panels, considering a number of direct communications to the Board, as well as requests for project registrations, issuance of CERs and renewal of crediting periods. A number of other issues on the agenda were postponed to the next meeting due to lack of time at this meeting to consider them, and prioritization of the agenda discussions.

The Board also observed a minute of silence in honour of Mr. Rajesh Sethi, who passed away on August 25, 2020. Mr. Sethi was a member of the Board from 2005 to 2011, was its Chair in 2008, and served as secretary to the Board since 2014. The Board members expressed their condolences to the family and the secretariat and remembered him as an esteemed colleague and a champion for the market mechanism under the UNFCCC.

Discussions at the 107th meeting of the CDM Executive Board were conducted over two virtual sessions spread over three weeks to accommodate members spanning five continents, from Japan to Peru, and were ably guided by El Hadji Mbaye Diagne, Chair of the Board.

The next meeting of the CDM Executive Board (EB 108) will be held in the first and second week of December.

Set up under the Kyoto Protocol, the CDM rewards projects in developing countries for each tonne of greenhouse gas they reduce or avoid. The incentive has led to the registration of more than 8,100 projects and programmes in 111 countries, from renewable energy projects, to projects that spread the use of healthy, efficient cook-stoves, to large industrial gases projects. To date, more than 2 billion certified emission reduction (CER) credits have been issued. 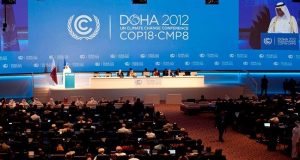 The Doha Amendment will come into force this year after Nigeria became the 144th country ...