In developing and middle-income countries including Ghana, women generally make up almost half of the farming population. And, according to the United Nations Development Programme (UNDP), the agricultural productivity of these women could increase by 20 to 30 percent, if they could have access to productive resources as men do. 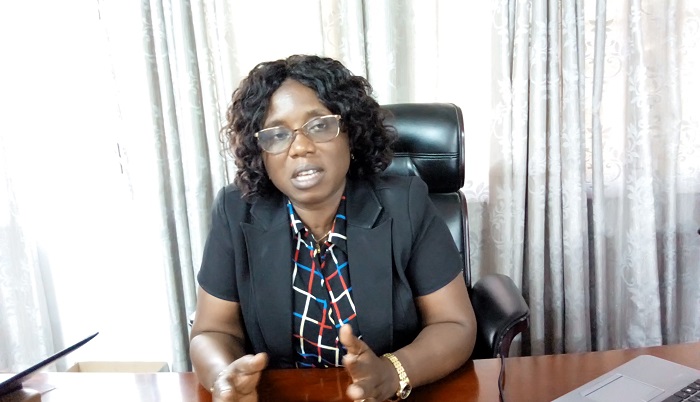 This assertion by the UNDP is an indication of the existence of gender-based differentiation in the agricultural sector that has defined the performance of women farmers over the years. So then, what productive resources are available for women farmers to tap and how will it impact them?

The Director of the Science Technology Policy Research Institute of the Council for Scientific and Industrial Research (CSIR-STEPRI) in Ghana, Dr. Wilhelmina Quaye, is of the view that biotechnology is one productive resource that holds good news for women farmers in particular as it promises efficiency in farming delivery and in maintaining the cultural identity of food.

Elaborating her point in an interview in Accra, she noted, “I must say that food in our system is not just food, it is a cultural thing, it gives identity to the individual and so if biotechnology will not change the way we’re going to prepare our food, nor compromise the quality or taste of the food, the women will be much better placed to make an informed decision.”

Dr. Quaye, who is the first female Director of CSIR-STEPRI, posed several rhetorical questions to emphasise her point. “Can you prepare the same quality of ‘konkonte’ (a meal prepared with cassava flour) from genetically-modified or GM cassava if it is available? And if we have GMO enhanced rice, will it have the same quality from which ‘omotuo’ or ‘riceballs’ can be prepared?”

And so, for the woman farmer, the challenge of having to feed the family with food that they identify themselves and whether or not a technology will ensure household food security become critical issues. Dr. Quaye explained that these issues are important for the woman farmer because of gender differentiated roles at the household level, which have saddled them with the responsibility of feeding their families especially in the northern setting.

“In the traditional northern setting… you can see that the man is supposed to be the bread winner in terms of just giving grain, which is the staple. So, what goes with it – the vegetables, meat and other ingredients is for the woman and so whatever the woman does is ploughed back into the house. And sometimes these so-called ingredients tend to be much more expensive than the grain.”

The fact is that in the scheme of things, women farmers are not just burdened with making such critical decisions about feeding their households but are also overburdened with household chores. “So, the laborious nature of farming is worsening the situation of the women farmers, who are involved in the various aspects of the production stages especially planting, harvesting, processing and marketing,” Dr. Quaye contended.

She argued further that because the woman farmer is already overburdened, “the issue of efficiency is very key and biotechnology promises that desired efficiency.” Therefore, apart from it retaining the cultural identity of food, what they will look for in a technology, according to the STEPRI Director, “is how it answers questions such as will it give the woman the same kind of work load or will it increase the work load, will it give higher yields per land area than then conventional crops do?”

This is because gender differentiation is also evident in the cultivation of crops. “In the agricultural sector, we see that even the crops are tired to gender characteristics with some crops like yam and ground nut labelled as men’s crops, because they are cash crops, while cowpea is for women,” Dr. Quaye observed.

She said the situation could be attributed to the type of investment that goes into it as well as the overall goal in crop cultivation, for the man and the woman. “It is very capital and labour intensive. So, it’s the men who will normally do it. The men will enter into enterprises that are cash driven and have a lot of margins on them as oppose to the women who will look at things that can help them in terms of food security in the house.”

Dr, Quaye called for intensive public education on the potential of biotechnology in ensuring food security, saying “without biotechnology we cannot feed the ever-growing population.” She further stressed the need for extensive trials of identified GM crops “to ensure that things are not worse off, so that we get everything right and not just focus on yields.”

Farmer, Philomena Tengey, is looking forward to the time when GM crops will be available in the country for farmers to cultivate. As a commercial farmer, she understands that “farming is not just about sowing and harvesting, it is a business that requires motivation, financial and logistical investments and adaptation of appropriate technology.”

Based at Nsawam, 34 km from Accra the capital and all things being normal, less than an hour’s drive away, Madam Tengey has been farming for a total of 20 years. She started as a subsistence farmer on a two-acre piece of land, but now has several farms each over 20 acres, which is big per Ghanaian standards.

Madam Tengey has been in the business of commercial farming for 10 years, cultivating pawpaw, rice and maize, among other things. How has she been able to sustain her business amidst challenges of accessing land, credit and dealing with drought? “I have taken land on long term lease in several locations and I work with a team of dedicated men and women.” 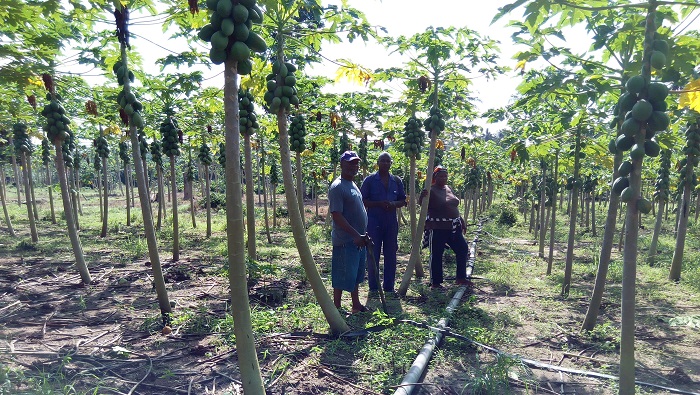 Madam Tengey (right) standing by the main pipeline of the irrigation system on one of her pawpaw plantations. To her far right is her husband, Emmanuel Kofi Tengey, and to her immediate right is Farm Manager, Kingsley Zate

For instance, her pawpaw plantation is managed by Kingsley Zate, who is a pawpaw expert and has a bit of training from the Kwadaso Agricultural School. He said they buy improved seeds from retailers who import from Brazil. “From the fruits, we gather seeds that we replant. But after five years, we cut down the pawpaw, buy new seeds and begin another round of cultivation.”

Kingsley explained that the fruitfulness of seeds taken from yields declines after some time, “so it makes business sense to go in for fresh seeds at intervals.”

But that is not all, Madam Tengey’s pawpaw plantation has an irrigation system, which takes water from a small dam built for that purpose. Therefore, her pawpaw farms bears fruit all year round, thereby making her a dependable supplier to food processors and exporters.

It is for the sake of women farmers like Madam Tengey that Ghana’s biosafety regulations mandates the National Biosafety Authority to conduct socio-economic risks assessments before making the final decision on any GM crop after successful laboratory and field trials.

“The socio-economic risks assessment is a broad range of consideration including gender issues such as whether a GM crop will be friendly for the woman farmer also,” says Prof. Kwabena Mante Bosompem, Director of University of Ghana’s Noguchi Memorial Institute for Medical Research.

He said if a GM crop fails this test, it will not be approved. “So, if any gender issues are identified then that alone would be enough grounds not to approve. This is because there are many communities where significant numbers of women farmers are. So, if you disadvantage such communities that will cause social problems for families and they will be unable to take care of themselves.”