United Nations Secretary-General Ban Ki-moon on Monday in Buenos Aires urged Argentina and other large nations to ratify the Paris climate accord , even as Argentina’s foreign minister said she hoped the country would do so by the end of the year. 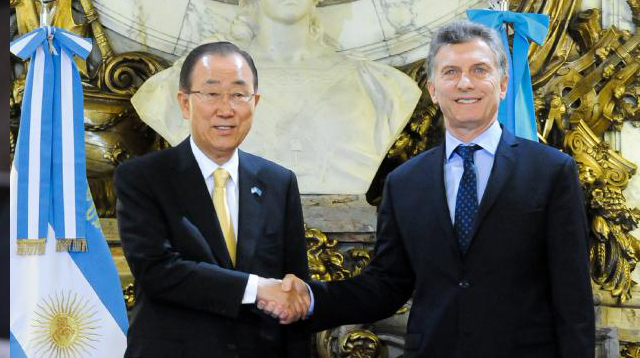 In December 2015, some 195 countries reached an agreement in Paris that obligates states to take concrete measures to curb emissions that contribute to climate change. But the pact will not go into force until it is ratified by 55 countries representing 55 percent of global greenhouse emissions.

As of now, only 22 countries have done so, many of them small, vulnerable island nations that account for a negligible percentage of emissions.

“When we add up the two countries’ greenhouse gas emissions, it comes to almost 40 percent” of global emissions, Ban said of the United States and China.

“So 55 percent may not be difficult to achieve, and I urge Argentina to ratify as soon as possible.”

In response, Argentina’s foreign minister, Susana Malcorra, who is running to replace Ban as U.N. secretary-general, said the accord has already been approved by one chamber of Congress and she hopes Argentina will have it ratified by the next major U.N. climate summit in December.

At the event in Buenos Aires, Ban also thanked Argentina for a recent commitment to take in 3,000 refugees from various war-torn locations.

“This kind of solidarity, sign of humanity, should be emulated by many people around the world,” Ban said.