Applying big data analysis to mineralogy offers a way to predict minerals missing from those known to science, as well as where to find new deposits, according to a groundbreaking study. 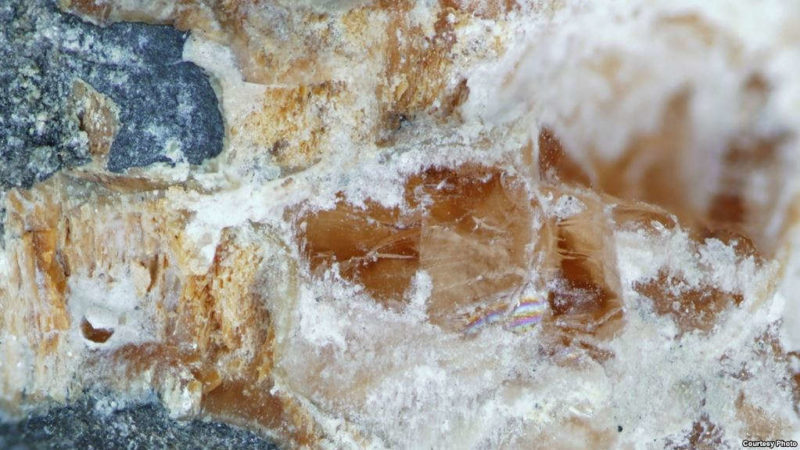 In a paper published by American Mineralogist, scientists report the first application to mineralogy of network theory (best known for analysis of, for example, the spread of disease, terrorist networks, or Facebook connections).

The results, they say, pioneer a potential way to reveal mineral diversity and distribution worldwide, their evolution through deep time, new trends, and new deposits of valuable minerals such as gold or copper.

“The quest for new mineral deposits is incessant, but until recently mineral discovery has been more a matter of luck than scientific prediction,” says Dr. Morrison. “All that may change thanks to big data.”

Humans have collected a vast amount of information on Earth’s more than 5,200 known mineral species (each of which has a unique combination of chemical composition and atomic structure).

Millions of mineral specimens from hundreds of thousands of localities around the world have been described and catalogued. Databases containing details of where each mineral was discovered, all of its known occurrences, and the ages of those deposits are large and growing by the week.

Coupled with data on the surrounding geography, the geological setting, and coexisting minerals, Earth scientists now have access to “big data” resources ripe for analysis.

Until recently, scientists didn’t have the necessary modelling and visualisation tools to capitalise on these giant stockpiles of information.

“Big data is a big thing,” says Dr. Hazen. “You hear about it in all kinds of fields – medicine, commerce; even the US National Security Agency uses it to analyse phone records – but until recently no one had applied big data methods to mineralogy and petrology.”

“I think this is going to expand the rate of mineral discovery in ways that we can’t even imagine now.”

The network analysis technique enables Earth scientists to represent data from multiple variables on thousands of minerals sampled from hundreds of thousands of locations within a single graph.

These visualisations can reveal patterns of occurrence and distribution that might otherwise be hidden within a spreadsheet.

In other words, big data provides an intimate picture of which minerals coexist with each other, as well as what geological, physical, chemical, and (perhaps most surprising) biological characteristics are necessary for their appearance.

From those insights it’s a relatively simple step to predict what minerals are missing from scientific lists, as well as where to go to find new deposits.

Says Dr. Hazen: “Network analysis can provide visual clues to mineralogists regarding where to go and what to look for. This is a brand new idea in the paper and I think it will open up an entirely new direction in mineralogy.”

Already the technique has been used to predict 145 missing carbon-bearing minerals and where to find them, leading to creation of the Deep Carbon Observatory’s Carbon Mineral Challenge.  Ten have been found so far.

The estimate came from a statistical analysis of carbon-bearing minerals known today, then extrapolating how many scientists should be looking for.

Predicted before they were found

Abellaite and parisite-(La) are examples of new-to-science carbon-bearing minerals predicted before they were found, thanks in part to big data analysis.

“We have used the same kinds of techniques to predict that at least 1,500 minerals of all kinds are ‘missing,’ to predict what some of them are, and where to find them,” Dr. Hazen says.

Says Dr. Morrison: “These new approaches to data-driven discovery allow us to predict both minerals unknown to science today and the location of new deposits. Additionally, understanding how minerals have changed through geologic time, coupled with our knowledge of biology, is leading to new insights regarding the co-evolution of the geosphere and biosphere.”

In a test case, the researchers explored minerals containing copper, which plays critical roles in modern society (e.g., pipes, wires), as well as essential roles in biological evolution. The element is extremely sensitive to oxygen, so the nature of copper in a mineral offers a clue to the level of oxygen in the atmosphere at the time the mineral formed.

The investigators also performed an analysis of common minerals in igneous rocks-those formed from a hot molten state. The mineral networks of igneous rocks revealed through big data recreated “Bowen’s reaction series” (based on Norman L. Bowen’s painstaking lab experiments in the early 1900s), which shows how a sequence of characteristic minerals appears as the magma cools.

The analysis showed the exact same sequence of minerals embedded in the mineral networks.

The researchers hope that these techniques will lead to an understanding and appreciation of previously unrecognised mineral relationships in varied mineral deposits.

Mineral networks will also serve as effective visual tools for learning about mineralogy and petrology – the branches of science concerned with the origin, composition, structure, properties, and classification of rocks and minerals.

Network analysis has numerous potential applications in geology, both for research and mineral exploration.

Mining companies could use the technology to predict the locations of unknown mineral deposits based on existing data.

Researchers could use these tools to explain how Earth’s minerals have changed over time and incorporate data from biomarker molecules to show how cells and minerals interact.

And ore geologists hope to use mineral network analysis to lead to valuable new deposits.

Dr. Morrison also hopes to use network analysis to reveal the geologic history of other planets. She is a member of the NASA Mars Curiosity Rover team identifying Martian minerals through X-ray diffraction data sent back to Earth. By applying these tools to analyse sedimentary environments on Earth, she believes scientists may also start answering similar questions about Mars.

“Minerals provide the basis for all our material wealth,” she notes, “not just precious gold and brilliant gemstones, but in the brick and steel of every home and office, in cars and planes, in bottles and cans, and in every high-tech gadget from laptops to iPhones.”

“Minerals form the soils in which we grow our crops, they provide the gravel with which we pave our roads, and they filter the water we drink.”

“This new tool for understanding minerals represents an important advance in a scientific field of vital interest.”