Three months after an oil spill that occurred from a facility operated by the Consolidated Oil and Gas Nigeria Limited (Conoil) in Sangana Community, Akassa Kingdom, Brass Local Government Area (LGA) of Bayelsa State, the oil firm is reportedly yet to respond to the incident.

This is even as the indigenes lament their plight in the face of the impact of the pollution on their source of livelihood.

Local folks and fishermen who spoke to Mr Alagoa Morris of the Environmental Rights Action/Friends of the Earth Nigeria (ERA/FoEN), a not-for-profit, disclosed that the spill, which occurred on Thursday, September 3, 2020, has led to the death of fish stock in the Sangana coastline.

Chairman of the United Fishing Union of Sangana, Ikonikumo Noel, said on December 28, 2020: “I have been laying this complain to several offices but there has been no favourable response. The death of this fish (referring to a decomposed sizeable fish and pointing towards the oil facilities in the sea) was caused by the oil spill from Conoil facility. The oil spill happened about three months ago.

“We have been looking for a way for Conoil to at least shut down the facility so that the effect would not come to us. But there has not been any solution. You see fishes are dying, dead fishes. Can you imagine, a big fish of this kind (picking up the skeleton remains of a decomposed fish).

So, this is happening in Sangana here and the company is keeping quiet and doing nothing about it even as the fisher folks are suffering. Because of this fisher folks no longer catch fish unless you drive deep into the ocean. If you don’t have a high-powered engine you cannot go there. And even the periwinkle and the different marine lives that we were managing to feed ourselves are no longer available due to this oil spill. We are suffering, so we need government to intervene; even the company, let them come and compensate the fisher folks so that we will have avenue to feed ourselves and secure our children. This is just what is happening here.”

Confirming the incident, a former CDC Chairman of Sangana, Benjami Ayibakuro, said: “Each time the current changes direction to the land, it is just getting into the creeks and everywhere fish are dying. The last time I was at the community, I saw fish dying at the shore. It spilled for over one month, and nobody talked. The incident happened in the sea, in the Atlantic and the waves bring the crude oil to the shore. Report has been given to the National Oil Spill Detection and Response Agency (NOSDRA) and Bayelsa State Ministry of Environment, and maybe even the Ministry of Mineral Resources, as well as agencies that ought to take up the matter. Yet we are not seeing anything.’’

On December 30 and December 31, 2020 ERA/FoEN officials reportedly reached out to the President of Akassa Youth Leaders Forum, Telimoye Matthew Moses, who signed a letter on the subject matter addressed to the Commissioner for Environment, Bayelsa State, dated September 18, 2020.

ERA/FoEN sought to know if the situation as stated in the letter to the Environment Commissioner has changed and if there had been any response from the authorities or Conoil.

Moses responded: “They have not done anything, those dead fish are still there. We have videos taken at the wellhead site and our fisher folks going to sea still inform us that the crude oil is still floating and affecting their fishing activities till now.

“They complain that when they withdraw their fishing nets from the dept of the sea, the nets come out soiled with crude oil. When I went round the shoreline this afternoon with Ebiegberi Raynus, we still found dead fish and we took photos of some.”

In one of the video clips made available to ERA/FoEN by the Chairman of the United Fishing Union of Sangana, a fisher folk identified as Kingsley Awari was heard speaking in the Akassa dialect of Ijaw thus: ‘’This is the source of our suffering, causing fishes to be scarce in the ocean. Hunger is killing us (we are hungry). The fish are being killed and washed ashore. This is the kind of suffering Conoil has put us into. We are suffering. What kind of suffering is it that has come to kill Sangana (people)?’’

Responding to questions from ERA/FoEN on December 30, 2020, Ebiegberi Henry Raynua, the Youth Affairs Coordinator of ADF, said: ‘’I and Matthew Telimoye Moses, President of Akassa Youth Presidents’ Forum, visited 16.64km stretch of the Turtle beach linking Okumbiribeleu and Sangana to verify a report of oil spill incident believed to have resulted from operations of Conoil and heard directly from fishermen the weight of the damage and how it has impacted on their livelihood.

“Dead fish were all over the beach. We identified three species of the dead fishes with predominantly croakers. Others are two species were Sslver catfish and tilapia. We moved from Okumbiribeleu to Sangana and met few fishermen. They explained that, although spill has reduced, but crude (oil) is found floating on the water some meters away from the shore.

“For proof, we met a man at Sangana who gave us video clips that showed oozing oil head. From community fishermen explanation, it is true that oil spill is ongoing. No investigation has been carried out or any agencies like NOSDRA have come to find out what is happening and to hold culprits accountable. Fishing communities are suffering from oil devastation and damages as they call on relevant interventionists to be proactive and act fast to end this threat. It is no doubt affecting conservation of marine ecosystems as the beach is major nesting ground for green, olive red and leatherback turtles.’’

The environment watchdog also said that Conoil should be fined according to the NOSDRA Act, if the company has not reported the incident already and within stipulated time of 24 hours.

Apart from immediately conducting a Joint Investigation Visit (JIV), ERA wants government to compel Conoil to do the needful in terms of cleanup, relief materials and compensation to victims of the company’s operations.

Community stakeholders are enjoined to include environmental/human rights advocacy groups like the ERA/FoEN as first line of those to contact whenever there are related incidents or issues.

“This is with a view to ensure that such important matters are not unnecessarily delayed, ignored or swept under the carpet by the same public agencies who ought to raise the Red Flag,” stated Morris. 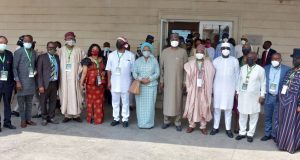 Environmentalists and residents on Wednesday, February 24, 2021 raised concerns over the dangers faced by ...