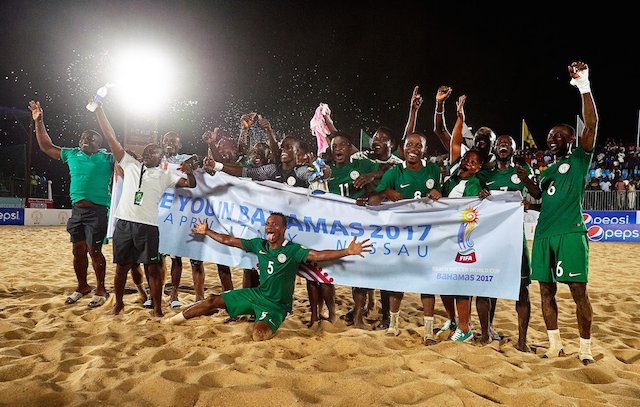 The Sand Eagles went into the game needing to beat Iran in extra time to qualify into the quarter-finals of the competition, but the Iranians were able to force the game into the decisive shoot out.

Nigerian goalkeeper Dami Paul saved Hassan Abdullahi’s opening spot kick but Victor Talli and Sulaiman Obodo missed their spot kicks as the Eagles failed to advanced into the quarter finals of the competition.

Goals from Victor Talli, Emmanuel Ohonoreria, Godspower Igudia and Bartholomew Ibenebau for Nigeria were canceled out by a brace from Mohammed Amadasa and two overhead kicks from Mohammed Muktari before the match went into penalties.

Africa’s other representatives at the competition, Senegal, advanced into the quarter finals, where they would meet Italy.

In a related development, organisers of the Wimbledon Open are set to announce it’s steady rise in prize money for this year’s tennis championship, as the tournament seeks to counter the pound fall in value, following the Brexit votes.

This was a 26.4 percent in pay rise on 2015 prize money, but this year’s increase could be significantly larger as the All England Club aims to compensate for the falling pound.

The amount is expected to be announced on Wednesday and prize money has to be £2.2 million to maintain its dollar value compared to previous years.