November 5, 2020 Comments Off on Are AfDB’s financing policies climate-friendly? 528 Views

With the climate crisis threatening over half of the global GDP, there can be no business-as-usual when the world begins to plan for a recovery from the COVID-19 pandemic. Instead, we have a unique opportunity to change our relationship with nature by shifting our development pathway to one that is equitable and sustainable. Development Finance Institutions may be the “visible hand” that can guide and finance the future we want.

But, according to Wangeci Migwi, Amy Giliam and Nicole Rodel, Africa will remain under the proverbial thumb of skyrocketing debt and climate catastrophe if the new vision of development financing remains all talk and no action at the upcoming Finance in Common (FiC) Summit

Some 450 public development banks across the world are coming together, to address the common need for new forms of prosperity that build the resilience of people and the planet. The twin crises, COVID-19 and the climate emergency, have made it clear, even for global financial institutions, that we must seize this moment to transform.

Among the key partners of this iconic summit is the African Development Bank (AfDB), who in 2019 made a commitment to get out of coal and build the “largest solar zone in the world” in the Sahel region. Sound like music to your ears? Well, why let facts get in the way of solid excuses? In 2020, AfDB made an Expression of Interest to join the landmark $20 billion Mozambique LNG financing. At a time when fossil fuels are proving to be a bad investment, AfDB appears to have difficulties in openly committing to withdrawing from fossil fuels.

Mozambique has been plagued by the resource curse akin to many fossil fuel producing nations. The expectations associated with this abundance has brought the nation to its knees. The 2009 announcement of massive natural gas discoveries in Cabo Delgado, and the vision of leaping into middle-income status was all too promising. Over a decade later, the people of Mozambique have nothing to delight in.

Instead, they experienced unfolding massacres, displacement, and untold misery. Yet, AfDB continues to invest in this misery to a tune of $400 million. According to the Bank’s Acting General Counsel, Souley Amadou, “This is a first in class transaction that sets a new standard for mega-projects on the African continent.” Disturbingly, this is how AfDB gaslights the continent in the name of investing in public development for the future.

The effects of financing fossil fuels were witnessed during Cyclones Idai and Kenneth, with more than 2.2 million people in Mozambique, Zimbabwe, and Malawi displaced. AfDB committed a whopping $100 million to finance the three countries, a fraction of their overall investment in fossil fuels. This comes as studies confirm that mass green public investments are the most cost-effective means to revive ailing economies, ensure long-term stability, and nip climate change in the bud.

A failed realisation of the devastating impacts of climate change and consequent investment in dirty fossil fuels suggests AfDB is complacent to the consequences of climate change. The bank’s investments in fossil fuels have fueled the transition of funds from public coffers into the bank accounts of private companies who pay insignificant taxes and drive the emissions causing the climate catastrophe.

As the world grapples with the twin crises, we must interrogate current definitions and frameworks of development. Throughout history, projects across Africa in the name of ‘development’ have prioritised profits and GDP growth over people. Many of these developments lead to the loss of people’s rights, livelihoods, and their lives, along with the destruction of Africa’s ecosystems and biodiversity. This begs the question, who is development for?

According to the International Panel on Climate Change (IPCC), Africa is one of the most vulnerable continents to the accelerating climate crisis. Food insecurity, water shortages, cyclones, forced migration, gender-based violence, and an exacerbation of conflict are a few ways the climate crisis is already threatening the lives and livelihoods of millions of Africans. What’s more, COVID-19 has exposed the underlying structural flaws of our current socio-economic systems, which have ultimately failed to address the climate and social crises.

There has never been a more urgent time for a rapid and just transition of African economies away from their reliance on fossil fuels. Recent research indicates that wind, solar, and other sources of green technology generate more than one- third of the world’s power, with solar photovoltaics surpassing coal and natural gas as the new cheapest energy source in most nations according to the International Energy Agency. Experts also indicate that renewable energy has significant long-term prospects and may emerge stronger than before – if governments and financial institutions prioritise and integrate clean energy into COVID-19 recovery programmes.

Despite repeated calls from civil society to AfDB over the past few years, the bank is yet to publish a fossil fuel finance exclusion policy stating the bank will not fund any coal, gas, and oil project on the African continent. It is time for AfDB to take a more decisive leadership role in fighting the climate crisis. The bank can and must do more to substantially expand their support for building Africa’s resilience and leaving fossil fuels in the past, by ensuring the continent leapfrogs to 100% renewable energy and sustainable development.

If the realisation of AfDB’s greenwashing troubles you, why not amplify the call for a just recovery during the upcoming Finance in Common Summit? By working together, we can ensure another generation is not lost to a lifetime of hardship, because a sustained collective movement would force governments and public finance institutions to take drastic action and snap out of fossil fuel investments. This revolution is possible if enough people demand it. 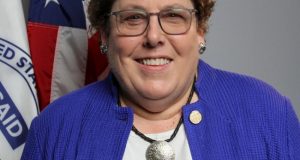 Green recovery is about Investment, not expenses – Melbourne