The need to sustainably harness Africa’s vast reserves of natural capital and the implications of the Paris Agreement dominated the opening session of the African Ministerial Conference on the Environment (AMCEN) in Cairo, Egypt.

Opening session of the AMCEN6 in Cairo, Egypt

Attended by the ministers of the environment and high-level officials from more than 40 African countries, the sixth special session of the AMCEN has “Agenda 2030 and Paris Agreement: From policy to implementation in Africa” as its theme.

Dr. Khaled Fahmy, Minister of Environment of Egypt and President of AMCEN, said: “Egypt is proud to host the sixth special session of the AMCEN in Cairo at this important moment in time. The continent stands to determine its development priorities in the context of the sustainable development goals. It is crucial for us to clearly define common priorities and the means to achieve our objectives at the regional and national levels.

“To meet the Sustainable Development Goals (SDGs), it is crucial that Africa confronts some of the biggest problems facing the continent, be it climate change or disease, poverty or the degradation of our ecosystems.

“It is of paramount importance that this session addresses the way forward for swift implementation of the African Renewable Energy Initiative as well as the African Adaptation Initiative.

“The outcome of this important conference will be communicated at the upcoming United Nations Environment Assembly, where our work here at AMCEN will feed into global efforts to find solutions to some of the most critical issues of our time.”

At AMCEN, ministers and government representatives are also expected to come up with ways for Africa to engage in the United Nations Environment Assembly (UNEA), which will be held in Nairobi next month.

African ministers are also expected to agree on the key steps needed to speed up the region’s efforts to combat climate change, following the landmark Paris Agreement adopted by 195 countries in December.

The agreement, which will be signed by over 130 countries this week, aims to keep the global temperature rise this century to well below 2°C and to drive efforts to limit the temperature rise even further – to 1.5°C degrees above pre-industrial levels.

In particular, the ministers will focus on the Africa Adaptation Initiative, which provides means for African countries to build resilience to the impacts of climate change, and the Africa Renewable Energy Initiative, which seeks to foster renewable energy capacity on the continent by 2020.

In addition, ministers will look at how Africa can benefit from the finance, adaptation, and loss and damage provisions agreed upon in Paris.

The meeting is expected to produce strategies for tackling key issues facing the continent, such as the illegal trade in wildlife. It is estimated that the loss of elephants – a key tourist attraction – costs Africa up to $1.9 billion annually.

High level officials at this sixth special session will discuss ways to reverse these losses and redirect the revenue into African economies to drive the continent’s transformation, alleviating poverty, reducing hunger, providing access to clean energy and improving education and health.

Sustainable use of Africa’s natural capital could result in savings of up to $103 billion every year for the region and drive economic growth to help Africa achieve the goals of the 2030 Agenda for Sustainable Development and the continent’s Agenda 2063.

Africa holds 30 per cent of the world’s mineral reserves, roughly 65 per cent of its arable land and 10 per cent of its freshwater resources. Its fisheries are estimated to be worth $24 billion and the continent boasts the second largest tropical forest in the world.

United Nations Environment Programme (UNEP) Deputy Executive Director, Ibrahim Thiaw, said: “The AMCEN meeting comes at a critical point in time for the environment. With the adoption of the Paris Agreement and the SDGs, the world has agreed upon a roadmap that charts a better future for humanity and the ecosystems that sustain it. At UNEA-2, the world will set the stage for the implementation of these goals and drive the world towards a better, more sustainable future.

“Key to achieving the vision laid out in the 2030 Agenda will be finding ways to make the most of Africa’s rich reserves of natural capital while protecting the environment and lifting people out of poverty.”

According to conservative estimates, the continent loses as much as $195 billion every year from resource plunder, illegal logging, illegal trade in wildlife, unregulated fishing, illegal mining practices, high food imports and degraded ecosystems.

AMCEN was established in 1985 to promote regional cooperation in addressing environmental issues affecting Africa. UNEP serves as the Secretariat of AMCEN and also provides both technical and financial support to the Conference.

Regular sessions of AMCEN are convened every second year, with the most recent one being the 15th session that was held in Cairo, Egypt in March 2015. In addition, several special sessions have been convened to consider specific issues of concern.

AMCEN is critical in providing strong leadership on environmental and sustainable development matters in Africa. Through its strong convening power, it brings together African Governments to deliberate and craft common positions on important environmental issues for the region.

The United Nations Environment Assembly (UNEA) is believed to be the world’s most powerful decision-making body on the environment and the de-facto “Parliament for the Environment” responsible for tackling some of the most critical issues of our time. The assembly holds the power to dramatically change the fate of the planet and improve the lives of everyone, impacting everything from health to national security, from the plastic in our oceans to the trafficking of wildlife. Thanks to UNEA, the environment is now considered one of the world’s most pressing concerns alongside other major global issues such as peace, security, finance and health.

This year in May, hundreds of key decision makers, businesses and representatives of intergovernmental organisations and civil society will gather at UNEA 2 at the UNEP headquarters in Nairobi, for one of the first major meetings since the adoption of the 2030 Agenda for Sustainable Development and the Paris Climate Agreement. The resolutions passed at UNEA-2 will set the stage for early action on implementation of the 2030 Agenda, and drive the world towards a better and sustainable future. 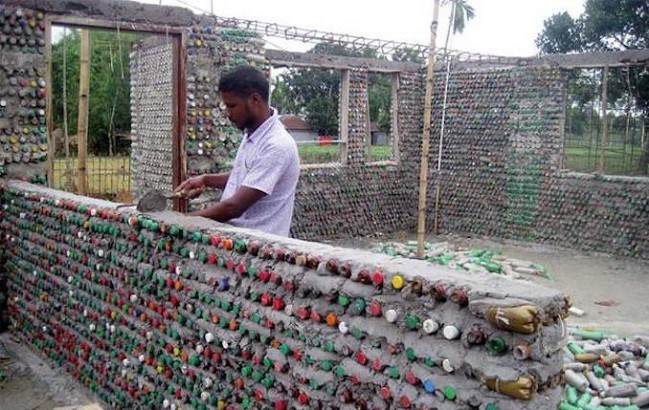 An environmental expert, Ms Gloria Bulus, has called for the adoption of Ecobricks building technologies ...