It appears that in spite of the recent fracas between President Muhammadu Buhari and the former president, Olusegun Obasanjo, there is one issue on which they agree – that Nigeria should adopt modern biotechnology as the solution to agricultural challenges. 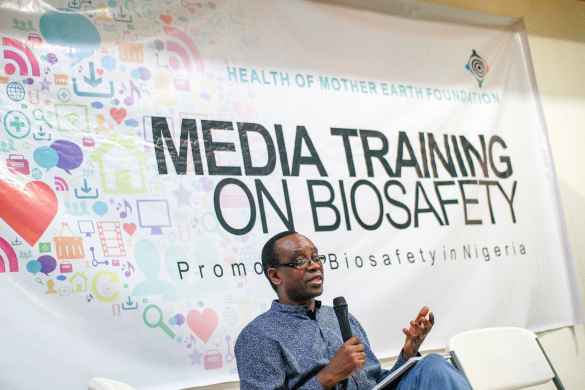 Nnimmo Bassey of HOMEF at a Media Training on Biosafety in Benin City, Edo State. He says research has shown that GMOs do not necessarily yield higher than normal crops

Health of Mother Earth Foundation (HOMEF) however differs with both on the view that agricultural biotechnology will end world hunger. Several individuals and civil society organisations including the Association of Catholic Medical Practitioners of Nigeria (ACMPN) have warned against the use of this technology in Nigeria.

Obasanjo, at the South-West Sensitisation programme of the Open Forum on Agricultural Biotechnology (OFAB), canvassed the adoption of biotechnology in agriculture to end hunger across the world.

In a swift response however, HOMEF asserts that agricultural biotechnology does not address the issue of hunger and it is not the solution to agricultural problems in the world.

“Genetically Modified Organisms (GMOs) which are the products of this technology are not designed to feed people but mostly to feed animals, machines and  the financial appetites of their producers and  their partners,” says Nnimmo Bassey, HOMEF’s Director.

He adds: “That more land will not have to be cultivated to meet increasing food demands and that what is needed is a reduction in food waste which now amounts to about 1.3 billion tons per year. One third of food produced for human consumption is lost or wasted globally and translates into roughly $680 billion in industrialised countries and $310 billion in developing countries.

“The world already produces enough food for over nine billion people which is the population peak we expect by 2050. Thus the challenge of hunger is not for lack of food but of lack of access to food. It is a problem of poverty, inequality and wastage.

“GMOs compound economic, health, and environmental problems instead of alleviating them. Majority of the genetically engineered crops are produced to withstand the use of herbicides or to act as pesticides themselves. Apart from the fact that these chemicals are expensive, they are highly toxic and destroy beneficial organisms in the soil. Studies have shown the development of super weeds and super pests which are resistant to these chemicals and the result is an increased dependence on chemical inputs and more environmental challenges.

“That GMOs bring about increased productivity is nothing but an industry-promoted myth. In India, over 300,000 farmers are reported to have committed suicide in the past two decades because of economic losses from non-performance of GM crops. Burkina Faso, for example, had to phase out the cultivation of genetically modified cotton owing to the disastrous yields it gave.”

Bassey further explains that a bulk of the food produced in the world today is by small scale farmers who use simple organic methods. He notes that productivity can be improved with provision of needed storage and processing infrastructure, good roads to access markets and extension services. The challenge of pest outbreaks can be tackled using traditional measures without risking every other thing.

According to Joyce Ebebeinwe, Biosafety project officer at HOMEF, agricultural biotechnology poses peculiar risks as the nation is not prepared to handle the health, environmental and economic implications of GMOs.

HOMEF advices the government of Nigeria to invest in more (independent and long-term) research on GMOs and to, in the meantime, develop safe, economically inclusive and environmentally sustainable approaches such as agroecology for improved agricultural productivity.

Biotechnology is not the way, HOMEF concludes.