May 18, 2018 Comments Off on Agency warns that desertification may engulf Nigeria 1,124 Views

The Director General, National Agency for the Great Green Wall (NAGGW), Mr Goni Ahmed, says desertification, if not tackled, will spread across the nation. 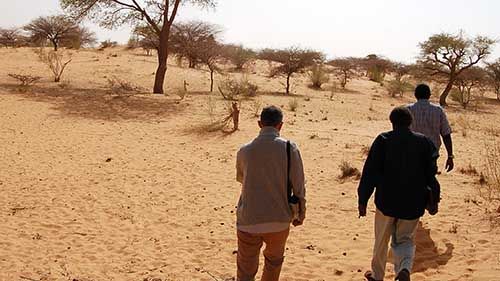 Ahmed made this assertion when he received the Director- General of the Nigerian Conservation Foundation (NCF), Dr Muktari Aminu Kano, in his office on Thursday, May 18, 2018 in Abuja.

He said that desertification and land degradation were very worrying phenomena that had devastated the northern Nigeria and that if not tackled would spread across the country.

He said the speed at which desertification was moving, destroying farmlands, livestock and even humans, was disturbing and, if adequate measure was not taken, the country might be engulfed with the menace.

The D-G said since the inception of the NAGGW, over 600 km of shelterbelts, 200 km of woodlots, and almost 300 hectares of Orchards had been established.

He said 157 boreholes were sunk and five skill acquisition centres built, among other achievements.

He noted that the project had been faced with some challenges as with any other government projects.

Ahmed said however that the agency was not relenting in seeing that the vision and mandate of the Great Green Wall (GGW) programme was achieved.

He expressed appreciation at the collaboration with the foundation as a window to other international groups, saying that, for the agency to bring back life and hope to the affected people, support from NGOs such as the NCF was welcomed.

According to him, this would help to achieve the goals of the GGW programme in Nigeria.

The Director-General, Nigerian Conservation Foundation (NCF), Dr Muktar Kano, said he was pleased that what was conceived by President Olusegun Obasanjo and adopted by the African Union had matured.

He said his foundation had prioritised agencies to work with, for maximum input and the NAGGW was found to be a credible one.

He said collaborations such as the one with NAGGW was important, adding that, in the past, so many government projects had not succeeded because of lack of cooperation.

Kano noted that the task of the agency was not only on environmental issues but also on socio-cultural ones such as security, unemployment, poverty and migration, among others, mostly caused by desert encroachment.

ALSO READ:  World Day to Combat Desertification: You are more powerful than you think!

He said NCF, as an environmental NGO, works to preserve the natural resources and biodiversity of Nigeria.

“It has partnership with a number of international environmental groups including the World Wildlife Fund (WWF), the International Union for Conservation of Nature (IUCN), among many others,” said Kano.

He promised to give a major input in bringing in some of these international groups to join in the fight against desertification and land degradation to ensure the GGW was built and completed.

“This will help to tackle desert encroachment and other socio-economic activities in the country,’’ he said.