African Ministers of Environment together with partner organisations have committed to an ambitious action agenda taking a coherent approach to addressing the interlinked challenges of biodiversity loss, land degradation and climate change. The action agenda will accelerate commitments for ecosystem restoration to improve resilience in the region.  Their deliberations represented the opening sessions of the 2018 UN Biodiversity Conference. 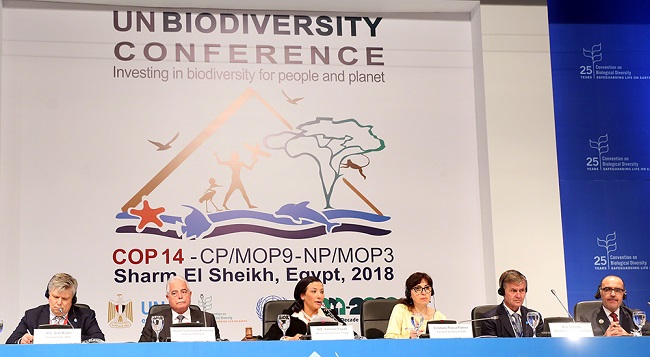 The African Ministerial Summit on Biodiversity was held on November 13, 2018 at Sharm El-Sheikh International Congress Centre in Egypt, under the theme: “Land and ecosystem degradation and restoration: priorities for increased resilience in Africa.”

The Summit brought together more than 100 delegates including over 30 ministers responsible for the environment and other sectors, six ambassadors plus other heads of delegation along with key partners. The delegates discussed Africa’s biodiversity priorities and identified strategic actions and opportunities to upscale commitments for combating land degradation and enhancing ecosystem restoration.

Dr. Yasmine Fouad, Minister of Environment of Egypt, said: “I am honoured to have hosted this first African Ministerial Summit on Biodiversity which I am convinced will lead the way to promoting natured-based solutions for increased resilience and wellbeing of people in Africa.”

Dr. Cristiana Pașca Palmer, Executive Secretary of the Convention on Biological Diversity, said: “The adoption of the African Ministerial Declaration on Biodiversity and the Pan-African Action Agenda on Ecosystem Restoration for Increased Resilience by the Summit provides an impetus for the achievement of the Aichi Biodiversity Targets and will contribute to shaping a New Deal for Nature and People in 2020.

“Your political leadership, paired with the support of the African Union Commission, the New Partnership for Africa’s Development Agency, and the United Nations system, has elevated the importance of restoration in achieving our 2050 Vision of “living in harmony with nature”. The Secretariat of the Convention stands ready to further support this work.”

In a series of interactive dialogues, the summit participants reviewed the status and trends in land and ecosystem degradation in Africa and their impacts on biodiversity and ecosystem services and people’s wellbeing.  They shared experiences, successes and lessons learned on ecosystem restoration in the region.

Several Ministers and delegates presented their national commitments and actions taken on ecosystem restoration. For example:

The Pan-African Action Agenda, endorsed by the Summit, will be submitted for adoption by the African Union Assembly of Heads of State and Government at its 32nd Ordinary Session in January 2019.

The UN Biodiversity Conference continues, with the High-Level Segment being held from November 14 to 15, and the opening of the negotiations by the Parties to the Convention on November 17, 2018.