Delegates from 196 countries on Monday held up solar lanterns in a show of solidarity symbolising the transformation to clean technology which is essential to achieve the Paris Agreement goals. 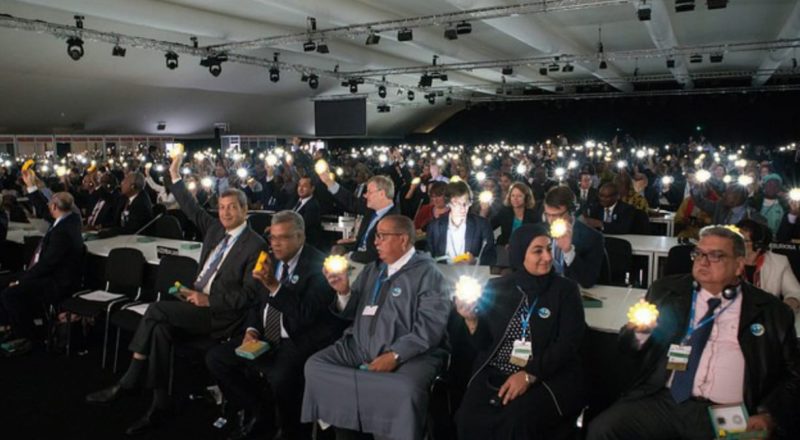 Delegates holding their solar lamps during the opening ceremony. The gesture is a show of solidarity symbolising the transformation to clean technology which is essential to achieve the Paris Agreement goals

This took place as the 22nd Session of the Conference of Parties to the United Nations Framework Convention on Climate Change (UNFCCC) began Monday morning in Marrakech, Morocco.

The solidarity show was at the behest of Morocco’s Foreign Minister and newly-elected COP22 President, Salaheddine Mezouar, who underscored his country’s willingness to host the conference as a demonstration of Africa’s commitment to contributing to global efforts at tackling climate change.

“It emphasises Africa’s desire to take its destiny in hand, to reduce its vulnerability and strengthen its resilience,” he said.

Together with Ségolène Royal, French Environment Minister and President of last year’s Paris UN Climate Change Conference, Mezouar handed out solar lanterns to all delegates at the opening ceremony.

Acknowledging that the fact that the Paris Agreement is yet to put the world on track towards the goal of a maximum global average temperature of 1.5 to 2 degrees, as agreed by the international community in Paris last year, COP President Mezouar urged government delegates “to be more ambitious than ever in your commitments.”

“All over the world, public opinion must perceive change. It has to be a change at all levels, from local projects through to those that cross international borders and it must create genuine win-win partnerships,” he added.

In her last address before handing over the stewardship of the climate forum to her Moroccan counterpart, Ségolène Royal announced that 100 countries have ratified the Paris Agreement, which entered into force last Friday, a record time for an international treaty.

“We have made possible what everyone said was impossible, I therefore call on other nations to ratify the Paris agreement by the end of the year,” said French environment minister.

UNFCCC Executive Secretary, Patricia Espinosa, reasoned that whilst the early entry into force of the Paris Agreement is a clear cause for celebration, it is also a timely reminder of the high expectations that are now placed on governments: “Achieving the aims and ambitions of the Paris Agreement is not a given. We have embarked on an effort to change the course of two centuries of carbon-intense development. The peaking of global emissions is urgent, as is attaining far more climate-resilient societies.”

The place of climate finance

According to the UN climate chief, climate finance has to reach the level and have the predictability needed to catalyse low-emission and climate-resilient development. This clearly resonates with African Development Bank’s plan to triple its climate financing to $5 billion per year by 2020.

President of the bank, Dr. Akinwumi Adesina, believes that its game-changing plan, the High 5s carries the prospects of tacking the impact of climate change on agriculture and how agriculture fuels climate change through a multi-pronged approach.

The first priority, Light up and Power Africa also deals with climate finance, adaptation and low carbon development. The bank has committed to triple its climate finance to US$5 billion a year by 2020, including by leveraging more finance from climate funds,”Adesina says.

Amid growing alarm at the gathering pace of climate change and its impacts – rising seas, deadly storms, drought and wildfires – the world’s nations have moved quickly over the last year to tackle the still-growing problem.

As 15,000 negotiators, CEOs and activists settle in for the 12-day talks in Marrakesh, all eyes are on the United States, where voting Tuesday could thrust Trump into the White House. When it comes to global warming, the stakes could hardly be higher, US President Barack Obama has warned.

“All the progress we’ve made on climate change” – including the Paris pact, decades in the making – “is going to be on the ballot,” he said.

Democratic candidate Hillary Clinton has vowed to uphold Obama’s domestic energy policies and international climate commitments. Experts in Marrakesh say the Republican candidate cannot carry out his threat to “cancel” the still-fragile accord, but a Trump victory might cripple it.

“It would be a shock, and I hope we don’t see it,” Laurence Tubiana, France’s top climate negotiator declared. “But if Trump is elected, I am sure that Wednesday morning you will hear everyone at the COP say, ‘We’ll stick to the Paris Agreement’,” she added.

Latching on the call made by the UNFCCC Executive Secretary on full engagement of non-state actors, the Pan African Climate Justice Alliance (PACJA) representing small holder farmers, trusts, pastoralists, women and youth groups from across Africa made public today their expectations for COP22.

Demanding acceleration on actions to address climate change with real, measurable actions and rhetoric, Secretary General of the Alliance, Mithika Mwenda, urged delegates to provide a roadmap on the provision of adequate and predictable financial resources from developed country Parties to developing countries to enable them meet their commitments in their NDCs as stated in Article 9 of the Paris Agreement.

The civil society group also underlined the urgency in establishing a common and agreeable reporting and accounting framework for financial support to enhance transparency of actions and avoidance of double counting provide the required capacity building support to assist African Country Parties to meet their NDCs mitigation and adaptation commitments in the Agreement.