The African Forest Forum (AFF) in collaboration with  the Network for Gums and Rasins in Africa (NGARA) is organising a regional/national workshop and webinar on sharing of information and experiences on “National forest governance responses to the Paris Agreement”.

According to a statement by AFF, the workshop and webinar will be held in Douala, Cameroon from August 30 to September 1, 2021 for Central and West Africa subregions, and from September 6 to 8 for Eastern and South African regions.

The statement says the webinar is “on information sharing and experiences on national forest governance as a response to the Paris Agreement and the contribution of dry land forest resources in building climate resilient communities in some Francophone African Countries namely: Benin, Burkina Faso, Cameroon, DR Congo, Mali and Niger”.

In efforts to support African governments in addressing climate change impacts, the AFF has undertaken initiatives to strengthen African forestry stakeholders’ capacity to respond to the Paris Agreement and related global climate change agreements and recommendations in forestry sector in order to strengthen national forest governance, among other areas, the release stated.

AFF officials say the goal to strengthen forest governance in Africa can best be achieved if the different stakeholders are better equipped with the knowledge to play their role.

It is against this backdrop that AFF conducted studies which revealed that though many African governments have signed, ratified or acceded to forest and climate change related international agreements, their compliance to the provisions of the agreements has been limited.

AFF notes that “only a few African countries have taken steps to comply with the agreements. Moreover, the integration of the provisions of the agreements into national policies, plans and activities has not been systematic and the approaches for doing so have been uncoordinated.”

Consequently, most African governments are yet to fulfill most of their international obligations on forestry and have not realised the benefits thereof.

In light of this, AFF has also focused on strengthening the understanding of measures to increase the resilience to adverse climate change impacts among drylands communities focusing on gums and resins value chains, the release states.

The development of gums and resins value chains is considered as alternative livelihood option to be promoted as a coping strategy to improve the resilience of climate sensitive populations, especially women and the youth, for their improved wellbeing.

In fact, dry forests are endowed with different types of Acacia, Boswellia, Commiphora and other woody species exuding gums and resins (gum Arabic, frankincense, myrrh and hagar), and are also providing many socioeconomic, cultural, medicinal and environmental benefits. However, underdeveloped markets and value chains and lack of financial capital and technical skills are key constraints in improving the gums and resins sector.

It is in order to contribute to filling these knowledge and capacity gaps that AFF, in collaboration with NGARA, undertook studies aimed at analysing the state of production, trade and marketing in gums and resins and to assess value chain actors’ capacity in selected producing countries. The findings from these studies will inform the improvement of Africa’s capacity to enhance the gums and resins value chains for improved livelihood outcomes in the context of developing climate change resilience of vulnerable communities, including women and youth, who depend on these resources and commodities for their livelihoods.

The AFF is a pan-African non-governmental organisation with its headquarters in Nairobi, Kenya. It is an association of individuals who share the quest for and commitment to the sustainable management, use and conservation of the forest and tree resources of Africa for the socioeconomic wellbeing of its people and for the stability and improvement of its environment.

The main objective of AFF, accordingly, is to provide a platform and create an enabling environment for independent and objective analysis, advocacy and advice on relevant policy and technical issues pertaining to achieving sustainable management, use and conservation of Africa’s forest and tree resources as part of efforts to reduce poverty, promote gender equality, and economic and social development. 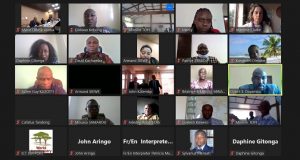