The African Development Bank (AfDB) has lauded the initiative by the African Ministers’ Council on Water (AMCOW) to deploy web-based system to track and report on the implementation of global and regional commitments on water and sanitation in Africa. 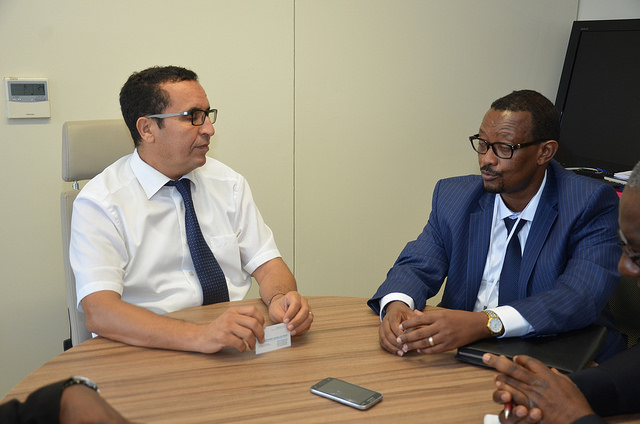 Mohammed El Azizi, Director of the Water and Sanitation department of the AfDB (left), with the AMCOW Executive Secretary, Dr. Canisius Kanangire

Mohammed El Azizi, Director of the Water and Sanitation department of the AfDB who also doubles as director of the African Water Facility Trust Fund, disclosed this on Friday while welcoming the AMCOW Executive Secretary, Dr. Canisius Kanangire, to the AfDB headquarters in Abidjan for the training on the web-based M&E system for stakeholders and member-states from francophone countries in Africa.

While restating the bank’s commitment to supporting the continent’s quest to achieve the sustainable development goals ahead of the 2030 target, El Aziz affirmed that “the development of a Web-based Monitoring and Reporting System marks a new milestone in the water and sanitation sector in Africa in line with the global quest for data revolution and evidence-based policy making.”

“We express our readiness to support AMCOW in monitoring and reporting on progress towards achieving not just African commitments, for which efforts to monitor progress towards attainment are constrained by the lack of baseline data, but also the SDGs which provide a great opportunity to establish baselines for both regional and global indicator frameworks,” El Azizi added.

Responding, AMCOW’s Executive Secretary Dr. Canisius Kanangire, acknowledged AfDB’s longstanding commitment to the development of the African water and sanitation sector as evidenced through the Rural Water Supply & Sanitation Initiative (RWSSI), the African Water Facility, and several others which go a long a way in increasing access to the clean and safe water on the continent.

“With more support and cooperation of the AfDB, we will be able to strengthen the AMCOW secretariat in its mission of providing effective political leadership in the Water and sanitation sector as well as achieving the Africa Water Vision 2025,” Dr. Kanangire said.

Over its past decade of operation, the AWF developed a portfolio of grants covering 104 projects in 52 countries including Africa’s most vulnerable states.

The AWF strives to mobilise and apply financial and human resources in ensuring water security in Africa, thereby contributing to meeting the targets and goals established by the Africa Water Vision 2025 and the Millennium Development Goals.

The AWF supports the delivery of the Africa Water Vision 2025 which will result in enhanced equitable and sustainable development and management of African water resources for poverty alleviation, socio-economic development, regional cooperation, the environment and resilience to water-related disaster and climate change.