The United Nations Office for Coordination of Humanitarian Affairs (UN-OCHA) says more than 8.5 million persons are in dire need of life-saving support due to humanitarian crisis caused by the Boko Haram insurgency in the northeastern part of Nigeria. 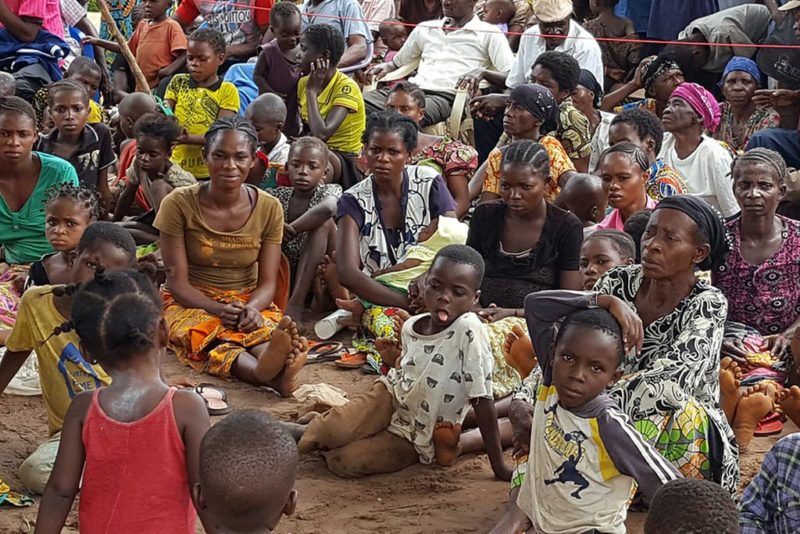 Some internally displaced persons awaiting food distribution in a camp

According to its recent report, no fewer than 6.9 million displaced persons are targeted for assistance out of the number.

The fact-sheet from the agency shows that 5.2 million people are facing food insecurity and 5.1 million persons are targeted for food security interventions.

Similarly, it observes that humanitarian organisations, in collaboration with the Federal Government, have also provided support to three million persons under the emergency food intervention programme.

OCHA explains that 2.1 million persons have so far benefitted from various nutrition interventions designed to control malnutrition in the war ravaged region.

Similarly, according to the report, more than 5.6 million of the estimated 6.9 million persons received health care service support through effective interventions provided by humanitarian organisations.

In spite of these humanitarian interventions, OCHA decried the spate of violence against civilians and internally displaced persons, noting that urgent measures were necessary to enhance protection and security of persons affected by the conflict.

It is against this backdrop that the UN Deputy Secretary-General, Mrs Amina Mohammed, recently paid a visit to Borno State.

She visited Bama, one of the communities liberated by the military from the insurgents, the Military Command, Control Centre, Military Cemetery and Maimalari Cantonment, Maiduguri, to assess the situations.

She said the visit was to assess gaps in humanitarian needs, identify areas of interventions and reconstruction efforts recorded by the government so that she could report back to the UN secretariat.

“My visit to Bama is to see what the government of Nigeria, Borno Government with the support from the UN system, has achieved in the past years; what are the challenges and the gaps to address.

“It is also to interact with those that are working in the frontline, to hear from humanitarian workers, our agencies and organisations, about the funds that we have put on the federal and state governments’ programmes.

“The visit is also to speak with displaced persons and the military with a view to understanding best way we can address the situations.

“To know how we can deal, address the crisis, work towards the resettlement and reintegration of displaced persons to their communities.

“The federal and state government have achieved significant feat in rehabilitation and reconstruction projects.

“There is considerable improvement from what has happened in the past two years; certainly, more can be done and that is why we are here.

“I will say that the funds raised at the Oslo Conference for North-East Humanitarian Intervention were properly utilised and we have seen the benefit of it.

“We look forward to another opportunity to bring more funds to Borno,’’ Mohammed stated.

Prof. Babagana Zulum, Commissioner for Reconstruction, Rehabilitation and Resettlement in Borno, said that 11,000 residential homes, 170 classrooms, 11 schools, electrification and water projects had been completed in Bama.

He explained that the projects were designed to facilitate voluntary return of displaced persons to their ancestral homes, build resilience and provide means of livelihoods to enable them to continue with normal life.

In a remark, Brig.-Gen. Garba Audu, Commander of the 21 Brigade of the Nigerian Army in Bama, Borno, told the UN visiting officials that the military were conducting various operations in the area including clearance of mines; security protection, support to internally displaced persons, unaccompanied children and provision of free healthcare services.

Audu declared that Bama town was safe and called for UN support to facilitate clearance of mines that were preventing farmers to cultivate farmlands.

He said that such clearance exercise was imperative to ensure protection of lives and property as well as fast-track resettlement of displaced persons.

In the same vein, Gov. Kashim Shettima of Borno observed that the UN had demonstrated greater concern and commitments to addressing the humanitarian crisis in the north-eastern region of the country.

“While as minister in Nigeria, Mohammed showed empathy towards us in Borno; she visited Chibok over the abduction of school girls and also visited Bama when the town was liberated from the insurgents,’’ the governor said.

For the benefit of hindsight, the 2016 Recovery and Peace Building Assessment Report indicates that one million residential homes, 665 public structures, 5,335 classrooms, 201 healthcare centres, ‎776 electricity installations were destroyed by Boko Haram insurgents in the region.

The report was issued by the World Bank, the European Union and the federal and government of the affected states in the region.

To address the problem, OCHA noted that improved funding was imperative to scale up activities and fast-track implementation of humanitarian interventions in the war ravaged region.

The UN agency stressed that the humanitarian crisis in the region remained severe due to ongoing conflict, continued internal displacement and unpredictable return of refugees from neighbouring countries.

The agency, nevertheless, promises that humanitarian partners will dedicate planning and programming to in-depth assessment in the region which findings will feature in humanitarian overview and 2018 Humanitarian Response Plan.