May 3, 2016 Comments Off on Activists take up global campaign against fossil fuels 1,555 Views 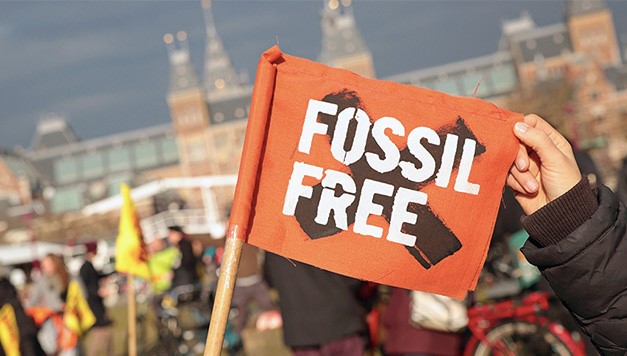 Starting Tuesday, a global wave of peaceful direct actions lasting for 12 days will take place across six continents targeting the world’s most dangerous fossil fuel projects, under the banner of “Break Free.”

2015 was the hottest year ever recorded and the impacts of climate change are already hitting communities around the world. From rising sea levels to extreme storms, the need to act on climate change has never been more urgent. Added to that, the fossil fuel industry faces an unprecedented crisis — from collapsing prices, massive divestments, a new global climate deal, and an ever-growing movement calling for change. The time has never been better for a just transition to a clean energy system.

To harness the moment, activists and concerned citizens committed to addressing climate change – from international groups to local communities to individual citizens – will unite to ensure that strong pressure is maintained to force energy providers, as well as local and national governments, to implement the policies and additional investments needed to completely break free from fossil fuels.

People worldwide are providing the much needed leadership by intensifying actions through peaceful civil disobedience on a global scale as so much remains to be done in order to lessen the effects of the climate crisis. This includes demanding governments move past the commitments made as part of the Paris agreement signed last month.

In order to address the current climate crisis and keep global warming below 1.5C, fossil fuel projects need to be shelved and existing infrastructure needs to be replaced now that renewable energy is more affordable and widespread than ever before. The only way to achieve this is by keeping coal, oil and gas in the ground and accelerating the shift to 100% renewable energy. During Break Free people worldwide are rising up to make sure this is the case.

Actions taking place between 3-15 May include:

Australia: On 8 May some 600+ people will gather at the largest coal port in the world, in Newcastle. They will demonstrate their resolve to make the climate a key issue in the coming election and show their determination to continue resisting coal no matter who is in the Prime Minister’s chair.

Brazil: Actions will be taking place at 3 locations across the country. Between 5-15 May there will be a rural fair in Maringa, which will include a big rally on 6 May, calling for a ban on fracking. On 7 May in Toledo there will be a mass anti-fracking action with thousands of people attending. And on 14 May there will be a march and mass civil disobedience targeting a coal power plant in Pecem, Ceará.

Canada: On 14 May hundreds of people will take action on the land and the water in Vancouver to oppose the proposed Kinder Morgan Transmountain tar sands pipeline, surrounding the Westridge Marine terminal.

Ecuador: An action is being organised on 14 May by Yasunidos bringing people together from around the country with a call to keep the oil in ground and protect the Yasuni National Park.

Germany: During the weekend of 13-15 May a few thousand activists are expected to come to Lusatia where they will engage in civil disobedience to stop the digging in one of Europe’s biggest open-pit lignite mines, which the Swedish company Vattenfall has put up for sale. The action will show any future buyer that all coal development will face resistance, and demonstrate the movement’s commitment against fossil fuel corporations.

Indonesia: There will be a mass action of thousands of people at the Presidential palace in Jakarta on 11 May. The action will include participants from many of the communities leading resistance to coal projects from around the country. The mobilisation will target President Joko Widodo demanding he revise his ambitious 35,000 Megawatt energy plan by moving away from coal and embracing renewable energy. A few days later there will be one or more actions at the site of coal infrastructure projects.

New Zealand: Between the 4-15 of May hundreds of people around NZ will take action to shut down the operations of one of New Zealand’s biggest investors and lenders to the fossil fuel industry, ANZ bank. There will be blockades, disruptive actions, and culture jamming from North to South.

Nigeria: In the Niger Delta actions will be held in three iconic locations to show what happens when the oil goes dry, and the community is left with the pollution and none of the wealth. An action at Ogoni land will demand an urgent clean-up of decades old oil spills and underscore how it is possible for citizens to resist the power of the oil corporations, and keep their oil in the ground where it belongs. Another action will be on the Atlantic coast, where Exxon’s offshore wells frequently leak, impact fisheries and harm coastline communities’ livelihoods.

Philippines:  On 4 May anti-coal activists from all over the Philippines will converge in a climate march that aims to mobilize 10,000 people in Batangas City, where JG Summit Holdings aims to put up a 600-Megawatt coal fired power plant that is set to occupy a 20-hectare site in Barangay Pinamucan Ibaba, Batangas City.  The people will be demanding the cancellation of the coal plant in Batangas as well as all 27 other proposed plants in the Philippines.

South Africa: Two actions will take place each with hundreds of people highlighting the local impacts of coal and climate change. The first on 12 May will see people gathering in Emalahleni, one of the most polluted towns in the world, to speak out on the effects of climate change. The second on 14 May is focused on the Gupta residence in Saxonwold, Johannesburg.

Turkey: Community leaders will head a mass action in Aliağa on 15 May at a coal waste site to call for a stop to 4 fossil fuel plant projects in the surrounding area. This action will unite several fights against individual coal plants into a unified stance against the current Turkish government’s plan to dramatically expand the use of coal in the country.

UK: The Reclaim the Power network will unite hundreds of people on 3 May at the UK’s largest opencast coal mine – Ffos-y-fran, near Merthyr Tydfil in south Wales. The action will take place just a few days before the Welsh Assembly elections on 5 May. The Welsh Assembly voted for a moratorium on opencast coal mining last April, but this has yet to become legally binding.

US: Across the US activists will target six key areas of fossil fuel development between 12-15 May. Including the new tar sands pipelines in the Midwest with an action near Chicago; fracking in the Mountain West with an event outside Denver; ‘bomb trains’ carrying fracked oil and gas to a port in Albany, NY; Shell and Tesoro’s devastating refinery pollution north of Seattle; action around offshore drilling in the Arctic, Atlantic, and Gulf coasts taking place in Washington, DC; and dangerous oil and gas drilling in Los Angeles.

According to campaigners, the programme intends to eliminate the power and pollution of the fossil fuel industry.

May Boeve, Executive Director 350.org: “By backing campaigns and mass actions aimed at stopping the world’s most dangerous fossil-fuel projects – from coal plants in Turkey and the Philippines, to mines in Germany and Australia, to fracking in Brazil and oil wells in Nigeria – Break Free hopes to eliminate the power and pollution of the fossil-fuel industry, and propel the world toward a sustainable future.”

Bill McKibben, co-founder 350.org: “There’s never been a bigger, more concerted wave of actions against the plans of the fossil fuel industry to overheat our earth–and for the just, fair, and sustainable world we can now envision. In the hottest year on record, we’re determined to turn up the political heat on the planet’s worst polluters.”

Jennifer Morgan, Executive Director of Greenpeace International: “Communities on the front lines of climate change aren’t waiting for governments to act. They are taking bold action, and the world needs to listen. The Paris Agreement was only possible because millions of people spent years fighting for climate justice. Now that governments have committed to action, we must make sure they follow the science and deliver on their words. The only way to survive climate change is through a rapid just transition to 100% renewable energy, keeping oil, coal and gas in the ground.”

Lidy Nacpil, Coordinator of the Asian Peoples Movement on Debt and Development (APMDD) and Co-Coordinator of the Global Campaign to Demand Climate Justice: “Communities all over the Philippines are demanding that the government cancel all plans, permits and construction efforts for new coal power plants and coal mines in the Philippines, and to take decisive steps towards the phase out of existing ones. We need to take major steps in order to break free from fossil fuels and all harmful sources energy. A complete transition to renewable energy is not only possible, but urgent.”

Nnimmo Bassey, Nigerian activist from the Health of Mother Earth Foundation: “Breaking free from fossil fuels is a vote for life and for the planet. The Paris Agreement signed by world leaders ignored the fact that burning fossil fuels is the major culprit in global warming. In these actions the peoples of the world will insist that we must come clean of the fossil fuels addiction. In Nigeria we will in addition raise our voices to demand a clean-up of the extreme pollution caused by oil companies operating in the Niger Delta.”

Melina Laboucan-Massimo, Lubicon Cree First Nation, Greenpeace Canada Climate & Energy Campaigner and 350.org Board member: “We are currently at a crossroads in humanity where we must choose either to continue down a destructive path of extracting fossil fuels or transition to sustainable ways of living. What we need is ambitious renewable energy projects, not more tar sands pipelines. These pipelines don’t have the support of local communities and the Indigenous nations they will impact. If we continue to build fossil fuel infrastructure, we are breaking our promise to do our part in Canada to stem a global climate crisis that is already being felt by communities all over the planet.”

Naomi Klein, award winning journalist/author: “The global climate justice movement is rising fast. But so are the oceans. So are global temperatures. This is a race against time. Our movement is stronger than ever, but to beat the odds, we have to grow stronger.”

Wael Hmaidan, Director of Climate Action Network: “People power in our cities, in our villages and on the frontlines of climate change have brought us to a point where we have a global climate deal – but we do not stop now, we need more action and faster. Civil society is set to rise up again, to fight for our societies to break free from fossil fuels, to propel them even faster towards a just future powered by 100% renewable energy.”

Archbishop Ramon Arguelles, Archbishop of the Roman Catholic Archdiocese of Lipa in the Philippines: “Fossil fuel plants cause extreme harm to local communities and ecosystems, they are also a danger to the country and the whole planet since they are a major contributor to climate change.   It is immoral to burden future generations with the cost of mistaken energy choices made today.  It is time to end the age of fossil fuels.”