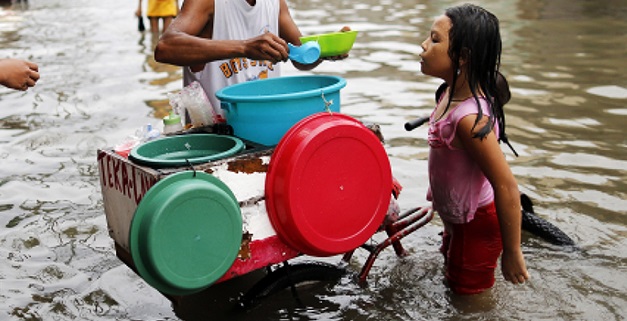 A young Filipino buys food from a vendor on a flooded street in Malabon, north of Manila, Philippines, 08 July 2015. According to the Philippines State weather forecast, heavy rainfall is expected in Metro Manila and nearby provinces due to an enhanced Southwest Monsoon and Tropical Storm Linfa, Typhoon Chan-hom and Typhoon Nangka which are lining up across the Pacific Ocean. Photo credit: EPA/FRANCIS R MALASIG

El Niño is a warming of the central to eastern tropical Pacific Ocean which affects rainfall patterns and temperatures in many parts of the world but most intensely in the tropical regions of Africa, Asia-Pacific, and Latin America which are particularly vulnerable to natural hazards. Typically, some places receive much more rain than normal while others receive much less.

“From Ethiopia to Haiti to Papua New Guinea, we are seeing the damage from El Niño, and we believe the impact on public health is likely to continue throughout 2016, even after El Niño winds down,” said Dr Richard Brennan, Director of WHO’s Emergency Risk Management & Humanitarian Response Department. “To prevent unnecessary deaths and illnesses, governments must invest now in strengthening their preparedness and response efforts.”

According to a new report by WHO, severe drought, flooding, heavy rains and temperature rises are all known effects of El Niño that can lead to food insecurity and malnutrition, disease outbreaks, acute water shortages, and disruption of health services. The health implications are usually more intense in developing countries with fewer capacities to reduce the health consequences. The current El Niño from 2015 to 2016 is predicted to be the worst in recent years, and comparable to the El Niño in 1997-1998 which had major health consequences worldwide. In Eastern Africa, as a result of the El Niño in 1997-1998, WHO found that rainfall patterns were unusually heavy and led to serious flooding and major outbreaks of malaria, cholera and Rift Valley Fever.

Based on the latest UN figures, the report estimates 60 million people will be impacted by El Niño this year with many suffering health consequences. Thus far, requests for financial support by seven high-risk countries (Ethiopia, Lesotho, Kenya, Papua New Guinea, Somalia, Tanzania and Uganda) facing the health costs of El Niño have reached US$ 76 million. WHO expects more countries will seek financial support to respond to El Niño effectively. Part of the response will be to provide additional health services to those in need, such as increased surveillance and emergency vaccination. Immediate needs also require funds to provide treatments for severely malnourished children in many countries, such as Ethiopia.

Different impacts across the world

While adverse weather effects of El Niño are expected to peak in January 2016 and wind down by April, the health impacts will last throughout 2016.

“It could take years to recover without an adequate, efficient and timely preparedness and response to El Niño,” said Dr Brennan.

El Niño is causing heavy rains and flooding in Eastern Africa with an associated risk that a recent cholera epidemic of more than 12 000 reported cases in Tanzania will spread and other countries will experience disease outbreaks. The Tanzanian cholera outbreak is the largest since 1997-1998, which had over 40 000 reported cases.

In the Horn of Africa, the devastating drought which has affected 22 million people has been followed by unusually heavy rains with a higher risk of vector borne-disease such as malaria, and outbreaks of other communicable diseases including measles and cholera. Populations with high rates of malnutrition are more susceptible to these types of diseases.

Extreme drought and acute water shortages affecting millions of people in south western Pacific, Central America and southern Africa will extend into the first half of 2016 leading to increased malnutrition and diarrheal diseases. For example, in Central America 4.2 million people are currently affected by drought. The poorest, most affected households may be severely food insecure with increased malnutrition until the next harvest in August 2016.

Following the severe flooding in Paraguay in December which led to evacuations of more than 100 000 people, wetter conditions in South America are expected to cause intense flooding in Peru, Ecuador and Bolivia with increased incidence of vector-borne diseases, respiratory infections and damage to health facilities with impacts to last well into 2016.

Health effects can be prevented

WHO’s report notes that important steps can be taken to prevent and reduce the health effects of El Niño, including: disease surveillance; controlling the transmission of diseases (e.g. vaccinations) and the vectors that spread diseases; mobilizing communities to promote health and hygiene practices; improving water and sanitation services; strengthening logistics and medical supply chains; providing emergency medical care and maintaining access to health services; and effective coordination of preparedness and response measures.

WHO and partners are working closely to support governments and the health sector in their preparedness and response for El Niño. To support national emergency measures in many countries, WHO has deployed specialised health emergency and technical personnel to Ethiopia, Indonesia, Papua New Guinea, Somalia, Tanzania and several Pacific Islands. WHO and health sector partners have provided inputs to government and UN interagency planning and coordination for El Niño at national level, including in Ecuador, Haiti, Kenya, Malawi, Papua New Guinea, Somalia, Sudan and Uganda.

In addition, WHO has actively worked with countries and donors in other ways, including, information management and health risk assessments, as well as engagement with national meteorological agencies for detailed updates on rainfall observed as well as more localised predictions.