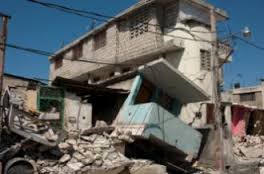 The U.S. Geological Survey said on Tuesday in Johannesburg that 5.3 magnitude earthquake has hit central South Africa killing one man.

It said the man died when a wall collapsed on top of him.

It said the tremor was centered in Orkney, a town around 120 km (70 miles) southwest of Johannesburg, an area with a high concentration of deep gold mines.

Werner Vermaak, spokesman for South Africa Emergency Service Provider ER24, said the buildings collapsed on the man believed to be in his 30s.

He there was nothing the paramedics could do for him when they arrived.

ER24 and South African rescue services confirmed that no miners were trapped underground, alleviating earlier concerns that workers were stuck in shafts.

Phoka Sefali, a Receptionist at a hospital in Orkney, confirmed that three people were hurt when the quake damaged a training center at a mine.

“The roof fell on them, but they haven’t got serious injuries’’, he said.

Sefali said the hospital staff members were on standby, awaiting the outcome of safety checks on miners who were underground at the time of the earthquake.

Lindy Sirayi, a guesthouse owner in Orkney, said the tremor, which lasted about a minute, broke glass lampshades and cracked walls.

Officials at AngloGold Ashanti, Harmony Gold, Gold Fields and Sibanye Gold said they had felt the tremors in their headquarters but had so far received no reports of anything untoward in their mines.

They said the area around Johannesburg was not prone to seismic activity “but it is home to some of the deepest gold mines in the world.’’

The officials said the quake was the largest in the southern Africa region since a 7.0 tremor in Zimbabwe in 2006, as it was also felt in Pretoria, the South African capital, and Hartbeespoort, a nearby resort town. (Reuters)

Adapting to climate change can save lives and livelihoods