381 new species discovered in the Amazon

A strong-beaked bird named after Barack Obama, a fire-tailed titi monkey and a new pink river dolphin, are among species recorded by the Living Amazon Initiative of the WWF Network. Remarkably, some 292 species were discovered between 2014 and 2015.

Here are some of them, as compiled by Compiled by Eric Hilaire in The Guardian of London. 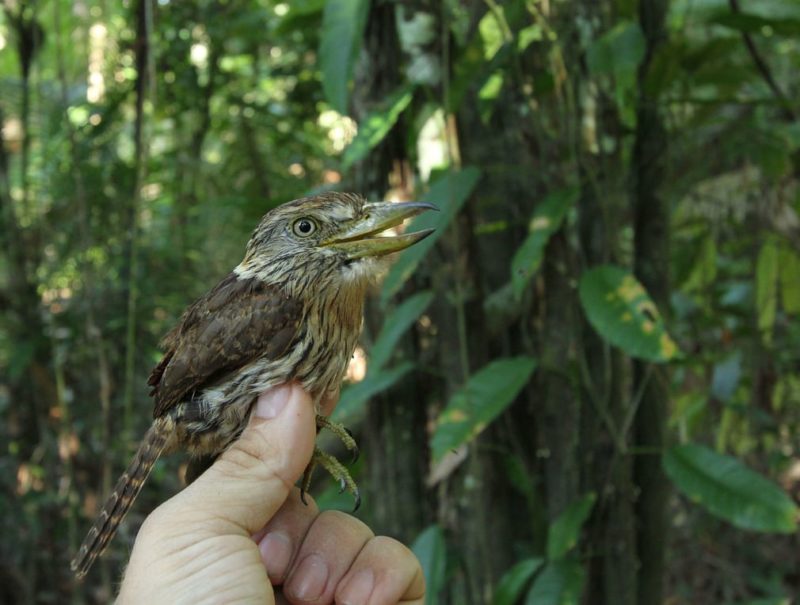 The Papiliolebias ashleyae, a roadside pond fish, was discovered in Santa Cruz, Bolivia – the only known location where the species is said to occur. It is predominantly reddish-brown, with white speckles, and a blue hue on the distal part of its fins. Males are more colourful than females. A male attracts a female by revolving around her in a 1,200 spin; the female then expels some three very small eggs.

The white-ball acari is a nocturnal species found on the Xingu River in Brazil. It is known locally by that name due to its dark grey colouring and large white spots. The biggest danger facing local fish in the Xingu River is the Belo Monte hydropower dam, 30km from Altamira. This dam is changing the environment and rare species may become threatened with extinction.

The freshwater “honeycomb” stingray, Potamotrygon limai, found in the state of Rondônia, Brazil in the Jamari River was, until its discovery, mixed up with another of the same genus. After the revision of Potamotrygon scobina, the new species was described. The discovery of P. limai shows the great colour variety of the family, which may lead to misidentifications. Its dorsal pattern is usually dark brownish, with honeycomb-like speckles.

In the upper Curuá river, in Pará, Brazil, lives a very colourful fish, Apistogramma kullanderi, isolated by large waterfalls, which can explain how it evolved with such bright colours. The fish were captured in shallow-water lakes, shaded by banks of vegetation. Under these conditions, it is speculated that ecological opportunities, reduced competition, and sexual selection contributed to the evolution of a large body size in A. kullanderi, which measures some 8cm. The species is considered the largest among the genusApistogramma, which usually measure 5cm.

The threatened Maratecoara gesmonei fish was found in a temporary pond on an island in the middle of the Xingu River, Brazil. This is the first occurrence of the genus and can be attributed to neotectonic activity in the area. The discovery of annual ponds broadens our knowledge about the distribution of annual fish in the Xingu river basin. The Belo Monte dam will destroy the habitat of annual fish currently known to occur here. The Spectrolebias reticulatus has already been made extinct by the dam.

The tyrannulet Zimmerius chicomendesi pays a well-deserved tribute to the Brazilian rubber tapper and environmentalist Francisco Alves Mendes Filho, better known as Chico Mendes. It inhabits grassland areas and flat, sandy, poorly drained shrublands, or steep grasslands with well-drained stony soil. Although it is primarily a frugivore, it can feed on insects, depending on the time of the year.

The western striolated-puffbird, Nystalus obamai – a tribute to the former US president Barack Obama – has well-defined eyes and a strong beak. It inhabits the borders of ‘terra firme’ upland forests and more-than 15 metre-high mature secondary forests. When foraging, it can sit patiently for as long as one hour before launching a sudden short air strike to catch its prey. It occurs in innumerable protected areas, including the Manu national park (Peru), the Chico Mendes extractive reserve (Brazil) and the Sangay national park (Ecuador).

A new species of pink river dolphin, Inia araguaiaensis, was discovered in 2014, thanks to the analysis of carcasses found in the Araguaia river basin in Brazil. Analyses of the skull bones distinguish it from the Amazon River dolphin and the Bolivian river dolphin and indicate it must have parted from the populations of the Amazon basin some 2.8 million years ago. The new species is estimated to have a population of about 1,000 with low levels of genetic diversity. Potential threats include the construction of hydroelectric dams, and industrial, agricultural and cattle ranching activities.