About every five years, the usually powdery white snow turns orange in parts of Eastern Europe. 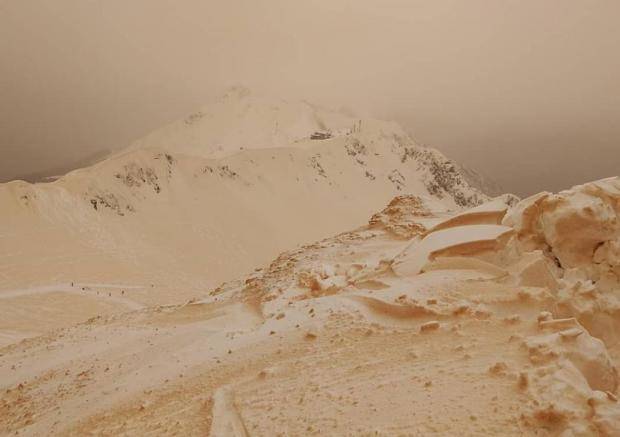 That happened again over the weekend, stunning skiers and snowboarders in Russia, Romania, Bulgaria, and other places in the region, with photos of the oddity appearing on social media.

“We’re skiing on Mars today,” exclaimed one social media user as he skied down the slopes.

According to The Independent, the phenomenon is understood to be the result of Sahara Desert sand and dust being carried into the atmosphere, where it mixes with snow and rain, and is then dumped over areas in Eastern Europe.

“There has been a lot of lifted sand or dust originating from North Africa and the Sahara, from sand storms which have formed in the desert,” UK Met Office meteorologist Steven Keates told the newspaper.

“As the sand gets lifted to the upper levels of the atmosphere, it gets distributed elsewhere.”

NASA satellite imagery shows plumes of dust from the Sahara moving across the Mediterranean, north toward the east of Europe. The Athens Observatory said in a Facebook post it was one of the biggest transfers of dust from the desert to Greece.

The African dust covered the entire country and concentrations were the highest in the last 10 years, according to the observatory’s meteorological service.