22 April will be record-breaking, says UN

The United Nations has disclosed that a record number of countries are expected to sign the historic climate agreement adopted last December in Paris at a signing ceremony scheduled for New York on 22 April this year. The event will be hosted by UN Secretary-General Ban Ki-moon. 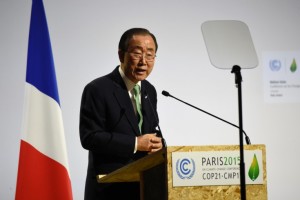 More than 130 countries have confirmed that they will sign the Paris Agreement on that day, the first day that the agreement will be open for signature. This would surpass the previous record of 119 signatures for an opening day signing for an international agreement, set by the Law of the Sea in Montego Bay in 1994. In addition, more countries have informally indicated that they will sign the agreement, with the numbers increasing rapidly each week.

Over 60 Heads of State and Government will attend the ceremony, including French President François Hollande, demonstrating the continued high level of engagement by world leaders to accept and implement the Paris Agreement.

The signing ceremony will mark the first step toward ensuring that the Paris Agreement enters into force as early as possible. The agreement will enter into force 30 days after at least 55 countries, accounting for 55 per cent of global greenhouse gas emissions, deposit their instruments of ratification or acceptance with the Secretary-General.

A number of countries have also indicated that they will deposit their instruments of ratification immediately after signing the agreement on 22 April.

The 22 April signing ceremony will also bring together leaders from civil society and the private sector to discuss efforts to boost financing for climate action and sustainable development, and to increase actions that would achieve the Paris Agreement’s goal of limiting average global temperature rise to well below 2 degrees Celsius.

“Paris was historic,” the Secretary-General said. “But it’s only the beginning. We must urgently accelerate our efforts to tackle climate change. I encourage all countries to sign the Paris Agreement on 22 April so we can turn aspirations into action.”