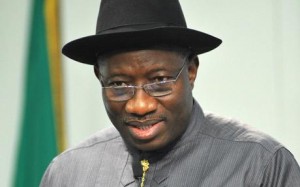 The Transformation Agenda Solidarity Forum (TASOF), a socio-political group, has urged President Goodluck Jonathan, to respond to calls by Nigerians and contest re-election in 2015.

Briefing newsmen on Friday in Abuja, Alhaji Muhammadu Ari-Gwaska, the Chairman of the forum, appealed to Jonathan to declare his interest without further delay.

“We join millions of Nigerians to urge him to respond to calls by genuine Nigerians to declare his interest in the election of 2015.

“We would like to remind Nigerians again and again that President Goodluck Jonathan, by constitutional provision (1999) is qualified to contest election for a second term,’’ Ari-Gwaska said.

He described the leadership style of the president as “wonderful’’ and called on Nigerians to rally round him, saying that he meant well for the country.

The chairman said that the claim by some politicians that Jonathan had agreed to do one term or was already doing his second term in office was “a misleading information”.

“We made it clear to those people, who claim to have had discussion with the president and that he told them he was only prepared for one term, that that was a private discussion which is not lawful or binding on Nigerians.

“The take-over of the government by President Goodluck Jonathan after the death of the late president was a constitutional issue.

“The provision of the constitution is such that when the president dies, automatically his Vice will take over for the rest of the tenure,’’ he said.

According to Ari-Gwaska, Jonathan got his first mandate from Nigerians in the election held on April 16, 2011, during which he emerged victorious.

He also said that the insinuation that some politicians in the North did not want the president to contest the 2015 presidential election was a “political gimmick’’.

Ari-Gwaska said that the president got 60 per cent of the total vote cast in the 2011 presidential election from the Northern region.

“Those of us, who were alive at the time of Sir Ahmadu Bello, are witnesses to the fact that the then Eastern minorities, now South-South zone co-operated with the late Premier of Northern Nigeria.

“The campaigns for elections in 1959 were carried out in cooperation with this people, they are very loyal, respectful and cooperative; they assisted the North to bring unity to this country.

“Northerners, a lot of them are aware of this and they feel that our support for Jonathan is a return for the loyalty and cooperation by his grandfathers, some years back.

“We will continue to remind northerners, who are ignorant of this fact that it is not out of the way to support this leader to bring about peace and harmony,’’ he said.

Ari-Gwaska also urged Nigerians to eschew primordial sentiments and support the president in the fight against terrorists who were threatening the unity of the country.

“The surest way we can defeat terrorism is to support our government and its security forces at all times,’’ he said.

Ari-Gwaska commended the president for his steadfastness and the achievements he had so far recorded in all sectors in spite of orchestrated distractions and vilification. (NAN)