Kassam disclosed this in Jos, at a one-day sensitisation capacity building workshop .

The workshop was organised by the Federal Ministry of Water Resources in collaboration with the  National Orientation Agency (NOA) for Community Orientation and Moblisation Officers drawn from the 17 Local Government Areas of Plateau.

Kassam also disclosed that over 50 per cent of the state‘s population don’t practice hand washing which, he said, has increased the likelihood  of gastrointestinal diseases and other related health burden .

He said that the state ranked second in the country in terms of open defecation.

Kassam commended NOA and the Federal Ministry of Water Resources for organising the capacity building workshop.

He said the programme would reduce open defecation to the barest minimum.

According to him, the vision to achieve an open defecation-free Nigeria by 2025 is possible if all stakeholders take proactive steps through legislation, media campaign and effective sensitisation of the populace.

He disclosed that PRUWASSA was liaising with the 17 LGAs in the state to put in place a bye law to end open defecation which would be backed by strict enforcement, sanctions and penalties.

The official called on landlords to ensure that they include basic sanitation facilities in their buildings as a means of ensuring that their tenants do not practice open defecation.

He further called on the state government, local governments and private institutions to provide toilets in public places as part of their corporate social responsibility.

Kassam called on the training participants to ensure that the outcome of the training  was duly utilised for the improvement of hygiene and sanitation in Plateau and the country at large.,

Also speaking, Director-General of the National Orientation Agency (NOA), Dr Garba Abari, said that the aim of the programme was to expose Nigerians to the dangers of open defecation.

Represented by Mr Zingkat Nanyak, NOA State Director, Abari said that it was expected that, after the exercise, the practice of open defecation in the state would be reduced to the barest minimum.

Minister of Water Resources, Mr Suleiman Adamu , who was represented by Mrs Abasiama Ebieso, an official in the  ministry, said that apart from the health implications of open defection, the act exposed women and girls to violence and rape.

Contributing, a participant, Mr Dakale Lot, commended NOA and the Ministry of Water Resources for the workshop.

Lot pledged renewed commitment to sensitise people in his constituency on the dangers of open defecation. 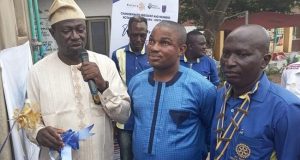 Stakeholders have urged the Borno State Government to declare a state of emergency on Open ...