At least 11 people have been killed and about 600 injured after Typhoon Jebi ripped through Japan, the most powerful storm to hit the country in 25 years, local media reported on Wednesday, September 5, 2018. 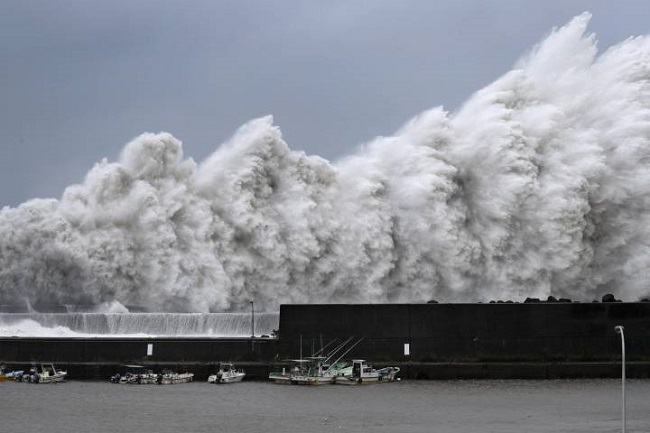 Of the 11 deaths, eight people died in the western prefecture of Osaka, including four men, who fell from upstairs or the roofs of their houses after apparently being hit by strong winds, broadcaster NHK reported.

Three others died after they were hit by flying objects, the report said.

About 3,000 people spent the night at Kansai International Airport after a tanker hit the bridge connecting the offshore airport and the city of Izumisano, NHK said.

The ship was damaged, but its 11 crew members were not injured.

Authorities began taking some of those stranded to nearby Kobe Airport, which is also located on an artificial island, by ferry early Wednesday, while others were taken to the mainland by bus.

The ship, which had been anchored in Osaka Bay, was swept towards the bridge as the storm lashed Osaka.

The airport remained closed on Wednesday, leading to the cancellation of 162 flights, and it is still unknown when it will be back to normal operation, Kyodo News said.

One of its runways and the basement floor of a terminal building were flooded.

About half a million households in Osaka and five nearby prefectures remained without power, as of 11 am (0200 GMT), according to Kansai Electric Power.

The season’s 21st typhoon was downgraded to an extra-tropical cyclone over the Tatar Strait near Russia at around 9 am, the Meteorological Agency said, after dumping torrential rains on the northern island of Hokkaido overnight, toppling trees and utility poles.

Jebi made landfall around the southern part of Tokushima prefecture shortly after Tuesday noon, according to the agency.

Jebi was the latest in a series of weather-related disasters to hit the country in recent months.

It was the country’s deadliest weather-related disaster in more than three decades.

An intense heatwave that enveloped the country immediately afterwards killed more than 130 people, as temperatures soared above 40 degrees Celsius in some places.