February 14, 2018 Comments Off on 1,000 students protest in Kathmandu against increasing air pollution 978 Views 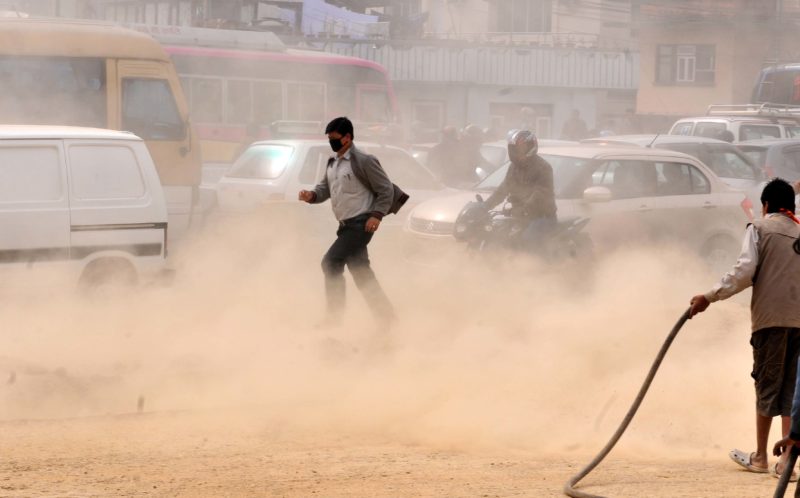 As part of the week-long Campaign for Clean Air Rights “Maskmandu,” youths and students participated in the symbolic protest in Ratnapark to raise awareness about alarming air pollution issue.

“Kathmandu is dying” and “I love my lungs” among others while some even slept on the main street.

This is the third edition of the campaign launched by a non-governmental organization Clean Energy Nepal with the theme “Me,” or “Myself,” which focuses on the slogan “I love my lungs.”

According to the organiser, the main aim of “Maskmandu” is to create public awareness about the ongoing pollution of Kathmandu Valley and to exert pressure on stakeholders to take concrete action immediately.

Rajan Thapa, an official from Clean Energy Nepal, told Xinhua on the spot that “Kathmandu, the city of temples, has turned into ‘Maskmandu’ today as people are unable to walk on streets without masks.

“Our only will is to see Kathmandu as the beautiful Kathmandu, free from pollution.”

Air quality in the Himalayan country is often regarded as the worst in the world while Nepal is ranked at the bottom among the 180 countries surveyed in terms of air-quality globally.

Kathmandu valley has been facing severe air pollution in the past few years due to smoke emission from vehicles, industries, brick kilns and increasing haphazard road expansion projects.

“We, public are suffering a lot due to increasing pollution, be it several lungs related diseases or even deaths.

“We want our voices to be heard by the government so have come together to protest,” Samikchya KC, a graduate level student at Kathmandu Forestry College, told Xinhua.