Civil society representatives have been monitoring ongoing talks by the Intergovernmental Panel on Climate Change (IPCC) in South Korea over the its 1.5°C Report, which observers have tagged a “rescue plan for humanity”. 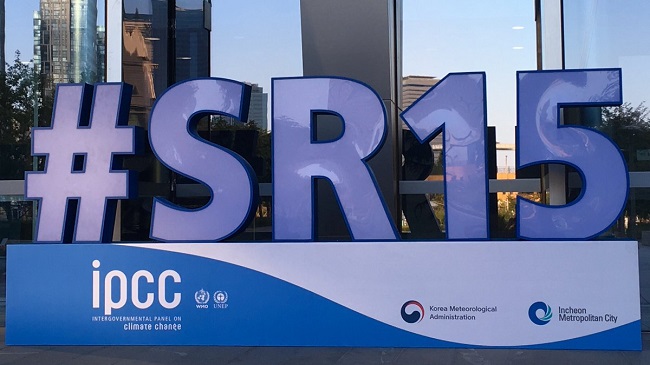 At the 48th Session of the IPCC in Incheon, South Korea, governments are considering the Special Report on Global Warming of I.5ºC

The activists, from Greenpeace, WWF and Oxfam, operating under the aegis of the Climate Action Network, have highlighted the significance of the discussions underway on the most definitive scientific assessment on climate change by the IPCC on the 1.5°C temperature limit as enshrined in the Paris Agreement.

The report will provide detailed signposts that can guide policymakers on pathways to limit global warming to 1.5°C. The summary of policymakers, currently under negotiations, is expected to be released on Monday, October 8, 2018 and will summarise the nearly 1,000-page full report.

The report comes at a time when the world is witnessing extreme weather events that are causing wide-scale destruction with alarming consequences even at 1°C warming. Every half a degree matters and the current collective climate commitments, which put us on a 3°C warming pathway, are nowhere near scaling down to a safe zone of 1.5°C.

The 1.5°C goal is considered a lifeline for those on the frontlines of impacts and is said to be critical for the protection of fragile ecosystems many of which, according to scientists, will be irreversibly lost even at 2°C warming.

Jennifer Morgan, Executive Director, Greenpeace International, said: “We must remember Parties requested this report in 2015 and they must own it. This IPCC report is set to outline a rescue plan for humanity. It will shine a light on what needs to happen and what we’ll suffer if we fail to act quickly enough.

“Those leaders who stand up, listen to the science and take action will be remembered as the moral authorities of their time. Given the evidence from science, countries must raise their national climate targets in line with a 1.5C pathway.

“We need new climate leadership. This report is not about politics, it is a scientific report and we need leaders guided by science. They really will have nowhere to hide with this evidence.”

She added she was hopeful and inspired by people taking action locally and justice groups such as in the Philippines demanding more from their governments.

Chris Weber, Lead Scientist, WWF Climate and Energy Programme, said: “New science shows that in many ways 1.5°C is the new 2°C in terms of impacts we are seeing and can expect. Delivering on the 1.5°C will require massive transformations in our societies which will only get harder and riskier the longer we wait and fail to increase ambition in the near term.

“The IPCC report will provide detailed signposts for governments and the most important underlying message is that to reach the 1.5°C temperature limit we need rapid and deep decarbonisation by 2050 and preferably by 2040 across sectors and specifically in the energy and land use systems. The difference between feasible and not feasible is in many aspects about political will.”

Raijeli Nicole, Regional Director, Oxfam in the Pacific, said: “The countries most vulnerable to climate change are boldly leading and we only have to see the declarations from the Republic of the Marshall Islands and Fiji on the sidelines of the recent One Planet Summit in New York. We ask that other countries step up ambition.”

Speaking from the Solomon Islands, she added that the IPCC report would be a concrete scientific input into the Talanoa Dialogue, which is at its heart about an open and honest conversation and to talk about the barriers.

“This is not aspirational talk, it (the Talanoa Dialogue) must consider the report must serve as a tool that we can all work with collectively.

“Also, it is not just the energy sector we need to focus on but all sectors (maritime, aviation, land) and how they can be managed with interactions on adaptation, mitigation and sustainable development to keep us in the safe zone of limiting warming to 1.5°C,” she added.

While the speakers could not comment on the content of the report under discussions and the political dynamics at play in the negotiations, they all reiterated that politics cannot come in the way of science and every half a degree matters in this race against time with climate change.