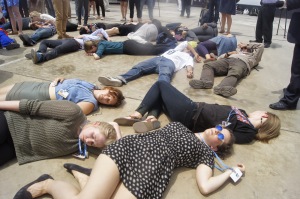 As negotiations at the COP 20 in Lima, Peru came to a conclusion on Friday, December 12, 2014, members of civil society performed a die-in with over 150 participants to reclaim the space and highlight the voices they say are being ignored by the U.N. process.

In unison, demonstrators fell to the ground outside of the plenary hall where a text to set a framework for a global climate “deal” next year in Paris was being negotiated. Speakers from the Philippines, Tanzania, the Dominican Republic and Peru addressed the crowd of bodies.

“This is hypocrisy and duplicity on the part of developed country governments,” Said Fazal Issa of the Pan African Climate Justice Alliance (PACJA) from Tanzania. 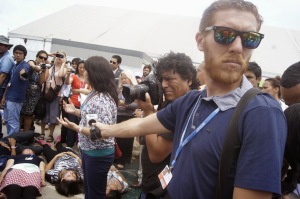 During the action, Gerry Arances of the Philippine Movement for Climate Justice told those gathered: “We are already suffering massive devastation, loss of lives, and displacement of communities, with just 0.8°C of warming. Even that will mean far worse consequences for our people than what they are already experiencing.” Arances added that neither sympathy, or solidarity, were adequate, because: “This outcome in Lima is unacceptable to the people of Asia.” 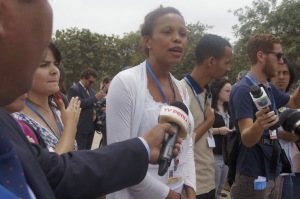 The impacts in the Philippines highlight that some losses and damages from a warmer world are already and will continue to be unavoidable. Last year in Warsaw, a process was established so that countries most responsible for climate change could compensate those that suffer these losses. But this year, some developed countries, like the United States and Japan, have tried to oust such a mechanism from being included in a global agreement.

Peruvian Lorena Del Carpio of Movimiento Ciudadano Frente al Cambio Climatico (Citizens Movement on Climate Change) was the last to speak. She did so as those on the ground and the crowd gathered began to beat their hands against their chests in a powerful unified heartbeat. She called citizens from across the world to continue to rise into action and not be struck down. 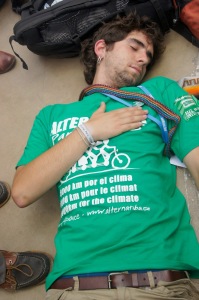 The bodies served as a stark visual reminder that the words negotiated in these halls have real consequences in human lives saved or lost. The action concluded with a song titled: “Hombre de Papel.”

Following a series of discussion focused on the challenges...