Across the globe, nations have kick-started a new and exciting development agenda aimed at ending poverty and reducing risks linked with climate change, pollution and over-exploitation of the natural environment. This journey to a brighter, more prosperous and resilient future has been forged through two powerful and mutually re-enforcing pathways – the Paris Climate Change Agreement and the Sustainable Development Goals of 2015.

Patricia Espinosa, United Nations (UN) Under-Secretary General and the Executive Secretary of the UN Framework Convention on Climate Change (UNFCCC), and Salaheddine Mezouar, President of the upcoming 22nd Conference of Parties (COP22) and the Minister of Foreign Affairs and Cooperation of the Kingdom of Morocco, in this jointly-written article published in the Green Africa Directory, explore the prospects of green growth on the continent in the light of the upcoming global summit 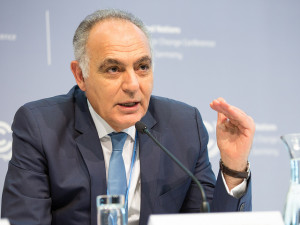 The prospects for success are high, since the involvement of all stakeholders is strong: All countries large and small, East and West, North and South are on board and fully committed in global negotiations, with the historical adoption of the Paris Agreement by 195 countries and the submission of Intended Nationally Determined Contributions (INDCs).

France and Morocco’s global climate champions have set out the Global Climate Action Agenda to boost cooperative action between governments and non-state actors in order to support and catalyse early and effective implementation of the Paris Agreement.

However, the work is just starting and many challenges lie ahead.

The pledges made will not limit global warming to 2°C. The consequences of global warming will be dire for agriculture and water supplies and threaten the most vulnerable regions and their populations. Governments need to raise their INDCs and make concrete, realistic plans to back up their national pledges.

Countries need to translate their INDCs into investible programmes through greater access to finance, adaptation of policy frameworks and better project planning. The involvement of non-state actors could be further strengthened, especially on investments, capability building and technology transfer.

Africa is at the dawn of an unprecedented growth. As outlined by the Africa Progress Panel, the continent has the opportunity to choose a model for its industrialisation. A “green growth” model that would draw on its vast renewable resource potential to build its economic growth would certainly give it an advantage on global markets. Similarly, the African Development Bank’s report on green growth highlights that this transition contributes to creating a “higher quality” of growth: more resilient and more inclusive. Africa’s biggest opportunities lie in energy, city planning and urban mobility, as well as agriculture and land use, all sectors facing major choices for their development. “Green growth” for Africa will materialise through:

Increasing access to clean, modern sources of energy. Over 620 million people in sub-Saharan Africa alone lack access to electricity. They are forced to rely on charcoal, kerosene, candles and torches that harm both their health and the environment and are unaffordable for the most vulenrable (most vulnerable households spend 20 times more than rich urban citizens for the same amount of energy, as they rely on biomass or costly oil-based generators). Development increasingly based on renewable energies in Africa (from 26% à 32% of energy production) is becoming increasingly competitive. Moreover, regional integration would allow to reduce costs even more through scale effect and better optimisation.

Develop resilient and inclusive cities. Because Africa is the fastest-urbanising continent in the world, the consequences of climate change on cities will be enormous, especially for their poorest inhabitants. The urban population of Africa is estimated to rise from its current level of 472 million to 659 million by 2025, and 1 billion by 2040, driving most of the economic growth on the continent. Yet, African cities cannot absorb the growth of their population because of the lack of urban planning, mass transportation systems, affordable housing and waste management systems. Weak institutions and widespread insolvency of African cities are adding additional constraints to the development of cleaner and more resilient cities. The urban poor are particularly vulnerable to climate change impacts, as they often live in highly exposed or at-risk areas (wetlands, floodplains, landfills, garbage dumps, rocky areas).

Boosting the resilience and productivity of agriculture. Warming of 3°C-4°C above pre-industrial temperatures will heighten the risk of extreme drought (particularly in southern Africa), decrease the yields of major staple crops by 20% and threaten water availability. Agricultural techniques, e.g., water storage, drought-resistant crops, crop rotation and flood protection, must be improved to make agriculture more resilient to climate change and reduce food loss and waste. Increasing the productivity of agriculture will also reduce deforestation, 70% of which is caused by agriculture.

Energy. The African Development Bank’s New Deal on Energy for Africa is a major initiative to coordinate efforts of all stakeholders on energy in Africa. Other initiatives aim to achieve universal energy access and scale up the use of clean energies include the UN’s Sustainable Energy for All (SE4All) and the Africa Renewable Energy Initiative (AREI), launched at the Paris conference. Governments can attract private investors by helping national players to develop bankable, scalable projects and introducing favourable regulation frameworks.

Cities and urban mobility. International initiatives such as the C40 Climate Leadership Group and the Compact of Mayors focus on helping African cities to develop urban planning and mass transit systems. The main challenge is to integrate Africa better into these initiatives as activities become more scalable.

This is a good start. The Marrakesh conference (COP22) later this year will enable us to take the next important steps by:

The COP22 is important for Africa’s city and regional leaders, CEOs and investors. They will witness first-hand the risks and opportunities of taking action nationally and internationally and be able to signal their solidarity with the continent’s governments and citizens.

We look forward to exchanging ideas and working together for a better future. This is an imperative for the World’s seven billion strong population and for future generations.

Have you ever wondered what happens to your discarded...