It took a public verbal spat between Governor Babatunde Fashola and the Minister of State for Defence, Senator Musiliu Obanikoro, over the Ilubirin Housing Estate that is under construction for the project site to attract a second look from motorists plying the Third Mainland Bridge. 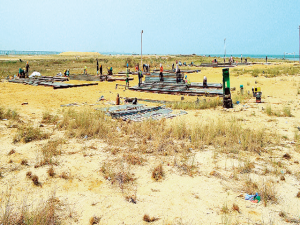 Before the tirade, which began in April, the area had generated a passing interest despite being listed among the locations of the Lagos State Home Ownership Mortgage Scheme (Lagos HOMS). The government had planned to build on the reclaimed land a total number of 1,254 flats, comprising two- and three-bedroom apartments on eight floors.

Until recently, Ilubirin was inhabited by Ijaws, Ilajes, settlers from Badagry and migrants from Benin Republic and Togo, who traded on commodities that riverine dwellers are known for. Specifically, their men fished, while the women supplied fish to the major markets in Lagos.

This was until the Lagos State Government demolished the settlement and embarked on reclaiming the place from the sea through the process of sand filling. While the removal of people from the environment was hailed, the reclaiming of land from the sea has continued to attract condemnations.

Those who frowned at the sand filling argued that constant encroachment on the ocean and lagoon does not augur well for the state ecologically and environmentally. They maintained that the damage to the ecosystem by excessive reclamation of land is gradual, accumulative and imperceptible, noting that the effects are irreversible.

While Fashola had taken exception to the minister’s use of military personnel to disrupt the ongoing project, Obanikoro, who represents Lagos in the federal cabinet of President Goodluck Jonathan, had wondered aloud why the state government has decided to build affordable houses on water and with barely a year to the expiration of the governor’s tenure.

“It is no longer a secret that most of the affordable housing communities in the world were built on land and not water. Moreso, the location of the Ilubirin project breaks all the laws on setback requirements for highways and roads.

“This administration has consistently done amateur-styled land reclamation projects across the state, an action that has caused severe environmental damage and extreme discomfort to many families living in Lagos,” he said.

Though the act of reclaiming land from the sea is a global practice, it is surprising that the latest one by the state government to build a low-cost housing estate has generated controversies. With the expertise employed by the government in all its sand filling projects, the existence of fears about ecological and environmental impact assessment of the projects, has somewhat been sustained.

Commenting on the growing incidence of land filling and reclamations going on in Lagos Island, Emeka Okonkwo, an estate surveyor and valuer, said it is a project driven by fraud because the cost of sand filling is going to be 10 times the cost of opening another place.

“There are tablelands all over Lagos. There are places even in swampy areas that can be recreated and redeveloped than going to pour sand in water, which is unreasonable. They reclaimed a lot of places in Dubai but the costs of those apartments are simply ridiculous.

“The island is already chaotic. How are you going to manage the traffic? Yet, the government is spending so much money reclaiming the land when there are slums littering Lagos that could have been redeveloped like Badia. But in the face of profit, money, and tax for government, the action may just make sense. However, as a professional, my advice to government would be opening up other areas instead of sand filling,” he said.

An environmentalist, Chief Osawe Irabor, said he saw nothing wrong with the exercise. “If done in an organised manner, I believe nobody will complain. But when it becomes rampant and reckless, the people must resist it because usurping natural settings could be disastrous in the long run,” he said.

Backing his argument with contemporary examples, Osawe said: “Nearly every part of the Netherlands was reclaimed from the sea. What is happening in Lagos should not be different. Statistics have it that China reclaimed 13,455 hectares of land from the sea in 2010, resulting in earnings of more than 7.82 billion yuan.

“However, with every sense of purpose, I will say that what is happening in Lagos is being driven by the desire to make money. It is business on the part of those doing it because poor people don’t benefit from the houses being built on the reclaimed land. I hope they are being done according to the best practices in order to protect the ecosystem,” he stated.

Still on his worries, he said there are possibilities of buildings erected there to sink while the state stands the risk of being swept off by earthquakes and tsunamis.

A professor of Geography, Prof. Kaine Amikpume, in his environmental impact assessment of the project, disclosed that there are inherent dangers associated with sand filling.

“We must tell ourselves the truth that this is a coastal state. And we are not immune to natural disasters associated with littoral states. It is just that we have been lucky not have experienced something beyond an ocean surge. Continuous reclamation of land from the sea distorts the ecosystem. But if done in an orderly manner with proper environmental impact assessment, the possibilities of failure will be minimal.

“I understand what the state government is going through in trying to meet up with population explosion, but the future of those you are trying to cater for should not be endangered by the same process. Other alternatives to sand filling should be explored to prevent the long-term effect, like opening up tablelands because you pay less to open up tablelands. But when you reclaim, you pay much and that informs the high cost of properties on reclaimed lands.”

It will be recalled that the state chapter of the Peoples’ Democratic Party (PDP), had called on the Federal Government to halt the sand filling of the ocean and lagoons in the state in the overall interest of the country. The party also berated the state government over what it described as “deceptive and diversionary evacuation of occupants from areas tagged slums, which was worsened by direct government negligence.”

In a statement by its Publicity Secretary, Gani Taofik, the party said the call came on the heels of the frequent ocean surges, which recently claimed lives and property at the beaches.

It alleged that the unnecessary loss of lives and property should be blamed on the All Progressives Congress (APC)-led administration, which has “remained adamant, irresponsible and only pursuing business interest that it chose to sand fill the ocean in its purported Eko Atlantic Project, where a plot of land is being sold for N350 million.”

The APC had in its reaction through the state Publicity Secretary, Joe Igbokwe, said: “We take it that Lagos PDP is far gone in mischief or it is on its well-known antics of conning Nigerians for sympathy when it blamed the ocean surge on the laudable Eko Atlantic City, which is generating worldwide attention.

“We feel that PDP’s greedy inclination which sees every opportunity as fat cow to be milked by greedy party men is leading it into reading such negative meanings into great projects that promise to lift Nigeria from the quagmire it had sank the country into.”

Michael Adegbola Dominic, governorship candidate of the All Progressives Grand Alliance (APGA) in Lagos during the 2011 election, sees it differently. “I can only say that Fashola is sinking concrete into the Atlantic Ocean, building bridges across the lagoon to Lekki and Banana Island and all that, but that is not what the majority of Lagosians need.

“The people of Lagos don’t need those concretes he is burying inside Atlantic Ocean, what they need is motorable roads in places like Ayobo, Ejigbo, Ikorodu, Ikotun, and so many other places in Lagos. Fashola is doing something good for himself and his elite friends. The people of Lagos are suffering, they are living in slums.”

Buoyed by the successful local currency bond debut in...

Shelter Afrique is developing a Sovereign Lending product to...