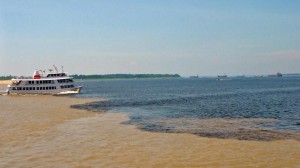 Barely two months to the kick-off of the FIFA World Cup in Brazil, a rather peculiar host city for the event has continued to generate global attention.

At the centre of the controversy is the city of Manaus, which is situated at the heart of the Amazon rainforest, which is believed to be the largest tropical rainforest in the world. The very location of the city of Manaus is one of its most remarkable attractions: the confluence of the rivers Negro (Black) and Solimões (the Amazon River). The dark-coloured waters of the former and the muddy waters of the latter flow side by side for over 18 kilometres without mixing, forming one of the Amazon’s most majestic sights.

Ironically, the location inspired the refurbishment of the “Arena Amazonia”, whose external façade is enclosed by a metal structure designed to resemble a straw basket, a product the region is famous for. 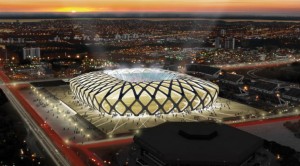 A considerable number of Brazilians and football enthusiasts the world over are however kicking against the choice of the Amazonian settlement as a host city, insisting that the World Cup games should not be held there. The city is 1,700 miles from Sao Paulo and surrounded by 2.1 million square miles of rain forest.

Indeed, some national team coaches have complained about the oppressive heat and humidity. Brazilians have grumbled over the exorbitant cost of building a soccer arena in the middle of the jungle – a city so remote that it took a 20-day boat voyage to deliver the steel to build the stadium. There are definitely concerns over the construction costs travel headaches and the playing conditions.

This sustainable stadium project will nonetheless provide an important legacy for the region and play its part in helping to preserve the diversity of the Amazonian rainforest. For example, rainwater will be collected for its subsequent use in toilets or to water the pitch, while the region’s abundant supply of sunshine will be harnessed to generate clean and renewable energy. Plant screens will also be created to keep energy costs down and, above all, to control temperatures inside the stadiums.

As well as seating for tens of thousands of spectators, the Arena Amazonia features restaurants and underground parking and served by dedicated bus and monorail services. It is hoped that the stadium will continue to attract tourists after the tournament by hosting concerts and cultural events.

Access to the city is primarily through boat or aeroplane. This isolation helped preserve both the nature as well as the culture of the city. The culture of Manaus, more than in any other urban area of Brazil, preserves the habits of Native Brazilian tribes. The city is the main entrance to visit the fauna and flora of the Brazilian Amazon. Few places in the world afford such a variety of plants, trees, birds, insects and fishes.

Rubber made it the richest city in South America during the late 1800s. Rubber also helped Manaus earn its nickname, the “Paris of the Tropics”. Many wealthy European families settled in Manaus and brought their love of sophisticated European art, architecture and culture with them. Manaus is also a duty-free zone, which has encouraged needed development in the region.

Since it was first inhabited in 1669, Manaus steadily evolved into the capital of the state of Amazonas and finally into the metropolis of the Amazon. Manaus is now the 12th most populous city in Brazil, with just over two million inhabitants, and became an economic powerhouse during the 20th century, after the construction of the Manaus Industrial Pole.

The equatorial climate of Manaus is another of its most interesting traits, with an annual temperature average of 28ºC, air humidity of over 80 per cent and two very defined seasons: the rainy one (December to May) and the so-called dry season, between June and November, when precipitation is not as intense and temperatures may reach as high as 40ºC.

The combination of outstanding natural beauty, local traditions and a metropolis on the rise gives Manaus a unique atmosphere, thanks to such diverse features as the Teatro Amazonas – an impressive concert hall that houses the annual Amazonas Opera Festival – and the Boi-Manaus, which is a celebration of the city’s anniversary, rocked by the sounds of the typical rhythm of the “boi-bumbá”.

The city of Manaus is home to a majority of football clubs in the state of Amazonas and, therefore, several rivalries. Nacional Futebol Clube hold the record for most state titles, but over the last few years São Raimundo Esporte Clube have been drawing national attention with good performances in the Copa do Brasil. Other traditional contenders are Atletico Rio Negro Clube, Nacional Fast Club and America Futebol Clube.

Vivaldo Lima stadium, also known as the Vivaldão, is the most important football ground in Amazonas and has been hosting the state’s decisive matches since its inauguration on 5 April 1970, when the Brazilian national team stopped by Manaus a few days before travelling to Mexico for the FIFA World Cup. Brazil defeated an Amazonas State Team 4-1 in a match that was witnessed by such dignitaries as then-FIFA President Stanley Rous.

India displaced Brazil, on Monday, September 7, 2020 to take second place after the United ...