World Bank warns that damages from extreme weather are rising

November 19, 2013 Comments Off on World Bank warns that damages from extreme weather are rising 1,091 Views 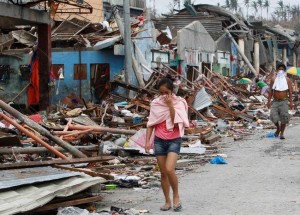 As the global climate continues to change, the costs and damages from more extreme weather related to a warming planet are growing. While all countries are impacted, developing
nations bear the brunt of mounting losses in lives and livelihoods from increasingly severe floods, droughts, and storms.

“Typhoon Haiyan, the most powerful typhoon ever to hit the Philippines, has brought into sharp focus how climate change is intensifying the severity of extreme weather events, which hurts the poor the most,” said Jim Yong Kim, World Bank Group President. “While the immediate relief effort must be front and center of our attention today, such tragic events show that the world can no longer afford to put off action to slow greenhouse emissions, and help countries prepare for a world of greater climate and disaster risks.”

More can be done to help vulnerable countries adapt to climate change, as well as prepare for and respond to weather-related disasters, according to a new World Bank report released recently on the sidelines of the UN climate talks in Warsaw, Poland.

Titled “Building Resilience: Integrating Climate and Disaster Risk into Development,” the report looks at the gradual or slow-onset effects of climate change like sea-level rise, salinisation of freshwater sources and droughts, as well as extreme weather events like floods, heat-waves or cyclones.

Produced before Typhoon Haiyan left its deadly trail of destruction across the Philippines, the report describes the costs of weather disasters the lives and jobs lost as well as in losses and damages to private property and infrastructure, and their particular impact on the poor.

“Over the last 30 years, the world has lost more than 2.5 million people and almost $4 trillion to natural disasters. Economic losses are rising – from $50 billion each year in the 1980s, to just under $200 billion each year in the last decade. . And about three quarters of those losses are a
result of extreme weather,” said Rachel Kyte, World Bank Vice-President for Sustainable Development. “While you cannot connect any single weather event to climate change, scientists have warned that extreme weather events will increase in intensity if climate change is left unchecked.”

With a focus on lessons from World Bank Group experience, the new Bank report calls for national governments and the international development community to work across disciplines and sectors to build long-term resilience, reduce disaster risk and avoid unmanageable future costs.

The main findings include:

·         Loss and damages from disasters have been rising over the last three decades, from an annual average of around $50 billion in the 1980s to just under $200 billionn each year in the last decade. According to the reinsurance company, Munich Re, data, total reported losses from disasters are estimated at $3.8 trillion in the period from 1980 to 2012 with 74% due to extreme-weather.

·         Weather-related economic impacts are especially high in fast-growing, middle-income countries due to increasingly exposed, valuable assets. The average impact of disasters equaled 1% of GDP over the six years from 2001 to 2006, ten times higher than the average for high-income countries.

·         The impacts are particularly crippling in smaller and lower-income countries that are least able to cope. Hurricane Tomas, for example, devastated St Lucia in 2010 and wiped out the equivalent of 43% of GDP. In the Horn of Africa, the extended 2008-11 drought, which at its peak left 13.3 million people facing food shortages, caused estimated total losses of $12.1 billion in Kenya alone.

·         Climate and disaster-resilient development can save lives and livelihoods and protect the poor from climate shocks. Early warning systems have been proven to save countless lives worldwide, and typically yield benefits that are four to36 times higher than initial cost outlay. Cyclone Phailin which hit Odisha and Andrah Pradesh in 2013 resulted in 40 deaths after years of disaster risk prevention and preparedness, compared to the 10,000 who perished during a similar event in 1999.

·         There are big pay-offs despite upfront investment costs. Disaster assessment experience suggests it costs 10-50% more to build safer infrastructure than to replace original structures. For large-scale infrastructure it can be substantially higher. For example, following the 2008 floods in Namibia investments were needed to elevate roads and improve drainage in flood prone areas. This carried a cost 5.5 times the replacement value of damaged structures.

Much is known already on how to build resilience, but better cooperation is needed among relevant agencies and disciplines. The World Bank and other partners have accumulated a wealth of global expertise in resilient development – but it requires better harmonisation of climate and disaster management agendas to prevent fragmentation of local capacity and global resources.

Previous: Why Nigerians die young
Next: Will decision on REDD+ emissions verification emerge in Warsaw?