June 18, 2015 Comments Off on WMO: How Africa will develop Regional Space Programme 988 Views

The Technical Task Force on the African Regional Space Programme (TTF-ARSP) . This was declared at the end of its meeting held on 10 June 2015 in Geneva, Switzerland on the margins of the 17th Congress of the World Meteorological Organisation (WMO). 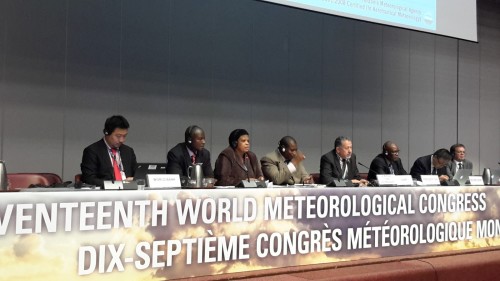 A session at the 17th Congress of the World Meteorological Organization (WMO) in Geneva, Switzerland. Photo credit: meteotz1950.blogspot.com

In her opening remark, the chairperson of the meeting, Dr. Agnes Kijazi, who is also the Permanent Representative of Tanzania with the WMO, stated that the “meeting is entrusted with identifying the role of stakeholders, spot elements of pilot projects, see a possibility of sharing experience with other countries currently running space programmes, discuss potential funding sources and come up with the way forward for the African Meteorological Space Implementation Plan”.

These were objectives set before the Task Force, following the resolution of the African Regional Space Programme, during the 3rd Session of the African Ministerial Conference on Meteorology (AMCOMET-3), in Praia, Cabo Verde, 13-14 February 2015, which endorsed the draft African Space Policy and the African Space Strategy with the understanding that issues of meteorology would be adequately taken into account in its scope for implementation.

“Unlike other sectors such as communication, navigation and positioning, which attract private investors to invest in space technology, Meteorology requires a collaborative effort to provide cost-effective possibility in obtaining continental coverage from space for Meteorological information,” said Dr. Kijazi.

The Meeting took a close look at the Concept Note on the mandate of the current African Ministerial Conference on Meteorology (AMCOMET) Task Force on the African Regional Space Programme with a focus on developing a feasibility study on the Implementation Plan for the Programme. It also shared experiences of countries such as China, South Africa, Nigeria and Kenya in their National Space Programmes.

“With the experiences shared today, the different levels in the implementation of Space Programmes are clearer. The African Meteorological Implementation Plan will, therefore, take a study of the viable options for Africa, cognisance of the available resources and possibly start with the application part which is related to the ground segment to build a critical mass of space scientists including application of satellite data in order to benefit from the ongoing programmes in the world, and later implement launching of the Africa Satellite,” Dr. Kijazi added.

The outcome of the meeting was to lay a clearer roadmap for the establishment of African Regional Space Programme, starting with incorporation of meteorological issues in the Draft African Space Policy, the Draft African Strategy, define Terms of Reference (TOR) for the Task Force based on lessons learned from other countries and further build on decisions reached at improving the region’s Space programme, in the 3rd Sessions of The African Ministerial Conference on Meteorology (AMCOMET) held on 13-14 February 2015 in Praia, Cabo Verde.