Governor of Lagos State, Akinwunmi Ambode, has said that water transportation remains the only visible option for the ever-growing local transportation demand in the state. 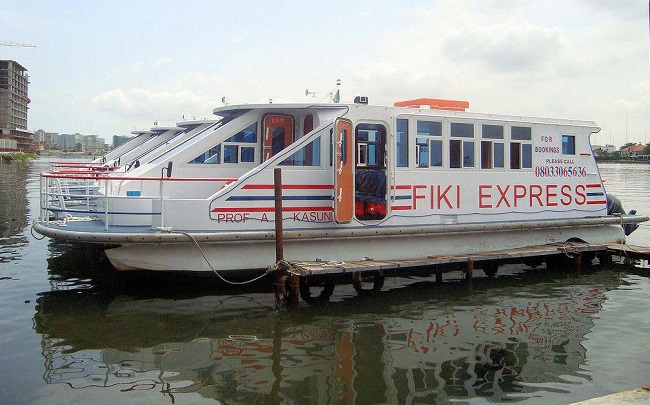 Fiki Express, one of the operators on the Lagos waterway

Ambode made the assertion on Thursday, August 30, 2018 at the inauguration of the Ferry/Lagos State Waterways Authority (LASWA) Head Office and Multi-Level Car Park AT Falomo-Ikoyi, Lagos.

Ambode, represented by Mr Kazeem Adeniji, the Attorney General of Lagos State, said the ferry terminal was a mileage into the policy of government to make movement of persons and goods less cumbersome.

The governor said the measure was also a symbol of the appreciation of the state government towards the overall development of water transport sector in the state.

“We are here today to inaugurate this Ultra-Modern Ferry terminal and the Multi-Storey Car Park.

“Both projects were conceived way back in 2011; it’s the result of the collaboration between the Lagos State Development & Property Corporation, the Lagos State Waterways Authority (LASWA) and the concessionaire, MTN Nigeria.

“The car park is a six-storey building over a land area of 31,454 square metres.

According to him, the government remains committed to providing the entire residents of Lagos with quality, affordable water transport services, while ensuring the waterways were safe.

Ambode said that ferry operation had proven worldwide to be an effective and efficient tool in relieving road transport as had seen in advanced cities of the world.

“Water transport is an integral component of the development of Lagos multi-modal transport system.

“We have no doubt that our waterways will offer further solution for the ever-growing transport demand in the state,’’ he said.

The governor said it was for this reason the state government was massively investing in water transportation.

He said the development had witnessed the rehabilitation and construction of new jetties, free distribution of life jackets, clearing of debris, removal of wrecks and constant patrol of the waterways.

He added that the state had recently purchased two water hyacinth clearing machines with navigational equipment to tackle the challenges posed by water hyacinth and other such water threats.

He explained that there was an ongoing installation of safety signs with marker buoys for route demarcation along the five cowries creeks.

“The newly constructed ferry terminals at Ebute-Ojo, Badore in Ajah and Ipakodo Ikorodu have been given out in concession to competent investors.

“This step will ensure effective management while 10 ferry licenses have been issued to new operators in recent time.

“Our administration has completed all arrangements for the procurement of seven high capacity passenger ferries to complement the existing ones, while we also plan to assist commercial ferry operators in acquiring new standard boats.

“We have developed a comprehensive masterplan detailing our renewed focus for effective water transportation in Lagos State and this shall be made public soonest,” he said.

“This building we are unveiling today epitomises the importance of Public Private Partnership to governance.

“The PPP initiative complements government’s budget and reduces deficit in expenditures. It also allows government funds to be re-directed to other important socio-economic areas.

“We therefore, call on all stakeholders to take a cue from MTN Nigeria by investing in water transport, water tourism, sports and recreation as government is always ready to provide an enabling environment.

“Water transport opportunities in Lagos remain largely untapped, having less than one per cent of overall traffic of the state, therefore more needs to be done, especially by the private sector to maximise maritime potential of Lagos State.

“Our government shall continue to protect the interest of those navigating and using the waterways with increased compliance checking and regular patrol while enhancing the bio-diversity, heritage and landscape values of the waterways.’’

Emmanuel said it was a watershed in the history of transportation in the state, adding that the state was beginning to show flashes of converting the huge water resource into revenue generating machine.

“Our profound gratitude goes to His Excellency, the Executive Governor of Lagos State, Mr Akinwunmi Ambode, for his unparalleled commitment toward upgrading, re-constructing and equipping all waterways infrastructure across the state.

“MTN Nigeria has actually created an acceptable standard in the water transport sector of Lagos state and indeed set a benchmark in Corporate Social Responsibility (CSR), to build such an imposing edifice for public use’’, he said.

According to him, the terminal is expected to attract new investors, boost ridership and reduce vehicular traffic on Lagos roads.

He also said the terminal would complement the efforts of the government in promoting the inter-modal transport system, adding that it would increase the efficiency of government intervention in the sector.

“LASWA remains committed to delivering, an enabling environment to all waterways users.

“The agency is working effectively to deepen and broaden the capacity in this sector to surpass all expectations in this regard.

“LASWA has also put in place various structures and processes to enable them achieve their objectives.

“We therefore, solicit a conscious cooperation of all waterways users as we ask for strict compliance with all existing rules and regulations of water transportation,’’ he said.

Mr Ferdi Moolman, the MTN Chief Operating Officer, said MTN was working in conjunction with the state government for the best way to modernise water transport in the state.

“MTN and Lagos State are working to improve quality of life of Lagos residents.

“We enjoin all other private sector to join in similar gesture because Lagos deserves it, and this is just the beginning of great thing to come,’’ he said.