A Nigerian journalist, Augustina Armstrong-Ogbonna, has been awarded the United Nations Foundation Gold Prize for Development and Humanitarian Reporting. 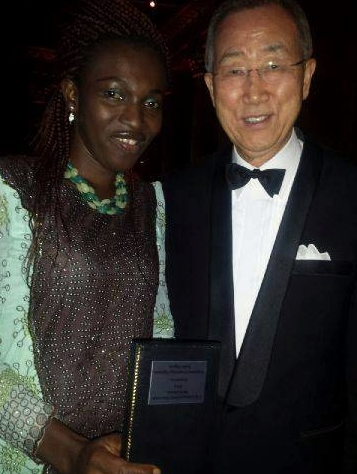 Armstrong-Ogbonna, a freelance journalist with Radio Nigeria (Radio One), won the Gold medal for her reportage on neglected coastal communities along the Lagos coastline that are bearing the drastic impact of sea rise as well as threats of displacement.

She was awarded the United Nations Foundation Gold Prize for print (including online media) and broadcast media (TV & Radio) for Development and Humanitarian Reporting.

The prize was awarded for her report on how climate change and rapid urbanisation are affecting coastal communities such as Okun Alfa, Otodo-Gbame in Lagos with extinction and eviction respectively.

According to the UNCA, “Augustina Armstrong-Ogbonna braves dangers to report on Nigeria’s coastal communities ravaged by conflict and degrading environment that affect development and human lives.”

With almost 10 years of experience as a multimedia and environmental journalist, Armstrong-Ogbonna has focused her reportage on neglected communities across Nigeria such as Okun Alfa and Otodo-Gbame in Eti-Osa Local Government Area, Sagbo Kodji Island and Makoko in Lagos State. Sagbo Kodji, for example, has never had power supply despite being located on an island that overlooks high rise of commercial Lagos Island as well as the Apapa sea port.

The report was picked online by a renewable energy company owned by two young Nigerians, whose company approached the community and provided solar power panels and battery to some homes and ventures on the island, thereby lighting up the community for the first time in over a century of its existence.

Reacting to the prize, Armstrong-Ogbonna said: “I am completely humbled by this recognition from the United Nations. It is a major encouragement for me to persist with impacting journalism that affects the common man and development of the environment. I am most obliged for this.”