The Federal Government says programmes of Sustainable Research and Action for Environmental Development (SRADev Nigeria) Nigeria have contributed significantly to its efforts to implement the Minimata Convention on mercury phase-out. 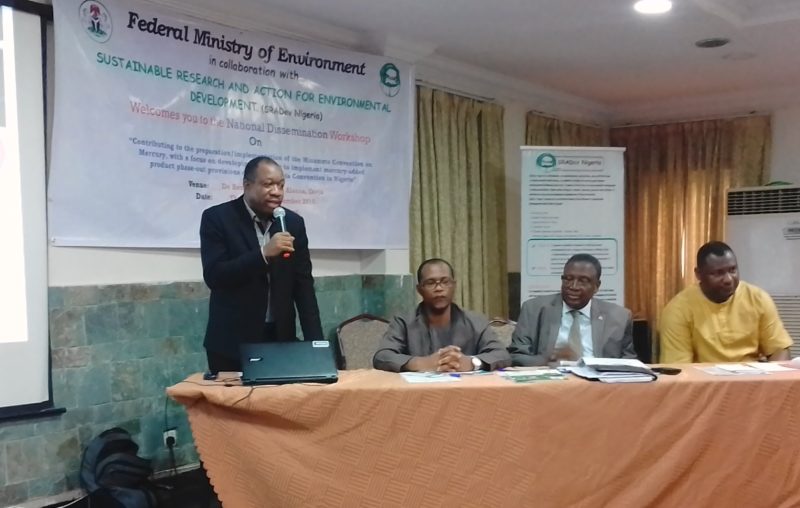 L-R: Executive Director of Sustainable Research and Action for Environmental Development (SRADev), Leslie Adogame; Chairman of the occasion and representative of the Minister of Environment, Olubunmi Okusanya; SRADev Technical Director, Prof. Babajide Alo; and Anthony Hotton of National Agency for Food and Drug Administration and Control (NAFDAC) at the National Dissemination Workshop on Mercury Products Projects in Nigeria facilitated by SRADev in Lagos on Thursday, December 7, 2017

Ibrahim Jibril, Environment Minister of State, disclosed this exclusively to EnviroNews on Thursday, December 7, 2017 at the final National Dissemination Workshop organised by SRADev in Lagos.

Represented by Olubunmi Olusanya, the minister said contributions from SRADev’s sensitisation programmes formed part of the ministry’s submissions on the phase out/phase down of mercury in products.

In his opening remarks, Okusanya, who was chairman of the occasion, noted that the “Minamata Convention is a global treaty to protect human health and the environment from the adverse effects of mercury pollution, and Article 4 of the convention deals with mercury-added products.”

Nigeria signed the Convention in 2013 and made efforts to ratify it in May 2017.

He noted that the ratification was “to ensure that our country does not end up as a dumping ground for mercury-added products after the rest of the world phases them out.”

According to Prof. Babajide Alo, the technical adviser to SRADev, Nigeria has signed the document and sent to New York.

The professor of Chemistry, while congratulating Nigeria for efforts so far to ratify the Convention, noted that “we have the Minimata Initial Assessment (MIA), but its implementation is why we are here.”

Going down memory lane, the don said 195 countries had come together and agreed that mercury is a pollutant of concern; hence they agreed to do something about it which led to the convention at Minimata, a village in Japan where people were dying of mercury poisoning.

Article 4 of the Convention read in part: “Each Party shall not allow, by taking appropriate measures, the manufacture, import or export of mercury-added products listed in Part I of Annex A after the phase-out date specified for those products (Year 2020), except where an exclusion is specified in Annex A or the Party has a registered exemption pursuant to Article 6. 2.”

Rico Euripidou, a South African international expert in mercury phase out/phase down, presented the keynote paper of the workshop. He made his presentation through Skype to the audience, as he could not make it to Nigeria before the workshop.

In his “Overview of the Mercury Convention: Expectations from Mercury-added Products phase-out Obligations”, Mr. Euripidou praised Nigeria for strategies adopted to achieve the phase-out, and encouraged the country to continue on that path.

He said: “We have been following the project in Nigeria. Nigeria has made a lot of progress with its sound strategies. We are very pleased. This convention represents a major milestone. This is only the beginning of the beginning.”

The executive director of SRAdev, Leslie Adogame, in his welcome speech, said SRADev was just complementing government’s efforts via helping to develop strategy to achieve the phase-out.

He disclosed that his organisation’s works had the backing of the Federal Government through the Ministry of Environment, the National Agency for Food and drug Administration and Control (NAFDAC) and other agencies as well as the Manufacturers Association of Nigeria (MAN).

In a goodwill message, Anthony Hotton from NAFDAC said the agency, which was at the vanguard of the zero-mercury journey, “is still 100 per cent interested in the campaign.”

The National Environmental Standards and Regulations Enforcement Agency (NESREA), through its Lagos State coordinator, Nosa Aigbedion, said the agency “is happy and ready to partner with anybody for a healthy environment.”

The workshop was wrapped up by status/updates of mercury-added products regulations in Nigeria by NESREA and NAFDAC.