Hundreds of Freetown residents on Tuesday, June 5, 2018, the World Environment Day, came together to plant trees in the honour of the more than 1,000 people killed or missing following the devastating landslide and flooding disaster at the Mortomeh community, Regent, in the capital Freetown on August 14, 2017. 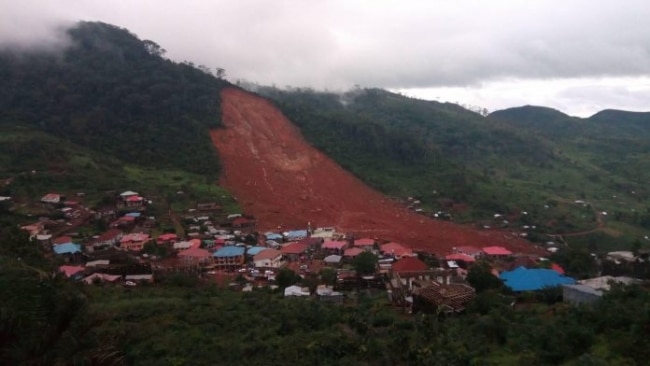 Scene of the landslide accident at Regent, Freetown, Sierra Leone

The landslide – comprising a mix of clay soil and boulders – ripped through the city of Freetown with tremendous energy, destroying everything in its path. The incident had a massive human impact, with over 6,000 people affected and caused significant destruction and damage to critical infrastructure.

The ceremony marked the launch of the National Tree Planting Day by the Government of Sierra Leone, which will see the planting of some 20,000 trees by hundreds of volunteers across the strip of land covering the disaster area to build resilience.

The event was organised to mark an important phase of the World Bank-supported Freetown Emergency Recovery Project, which is designed to support the government’s resilient recovery programme. The project aims to rehabilitate and rebuild damaged infrastructure, including remediating the landslide area and strengthening the disaster risk management and early warning capacities. This was informed by a Damage and Loss Assessment that was undertaken immediately after the disaster, supported by the World Bank and United Nations, which indicated recovery needs of more than $80 million.

“We consider the disaster and death of the over one thousand Sierra Leoneans as a painful loss of human capital and lives, which was the result of the mismanagement of our environment. The government, in collaboration with our development partners, is determined to work on the prevention of such degradation and the loss of human capital now and in the future,” said Samking Koihinah Braima, Deputy Minister of Agriculture and Forestry representing the President.

“Government takes the issues of the environment, forestry, conservation and agriculture very seriously. We therefore commit ourselves to make Sierra Leone and its environment sustainably green while equally working towards the country’s individual and collective environmental sensitive prosperity,” he added.

The first phase of the slope remediation measures was to reprofile the main slope of the landslide and recreate the existing drainage channels. Now that this phase is complete, the second phase is to re-plant the area to help hold the soils in place and reduce the surface run-off. Although the work carried out so far is reducing the instability of the slope, it remains a high-risk area.

President Julius Maada Bio recently setup a Mudslide Prevention Inter-Agency Committee to coordinate between key ministries, agencies and development partners, including the World Bank, to address the urgency of the situation with the rainy season just starting. It is with this is mind that the government is considering demarking the area as a protected memorial park, in memory for those who lost their lives and were impacted by the landslide.

“The fatal mudslides and severe floods of 2017 are stark reminders of how devastating the impacts of climate-induced hazards can be, particularly when combined with poorly planned human activities such as deforestation, encroachment within risky areas, unregulated construction of settlements on steep slopes, as well as weak monitoring and poor enforcement of environmental and land use regulations,” said Dr. Gayle Martin, World Bank Country Manager for Sierra Leone. “The World Bank is greatly encouraged by the establishment of the Mudslide Inter-Agency Committee and the development of a realistic workplan by the government to coordinate the response. The Bank stands ready to support this process in a manner that is consistent with our environmental and social safeguard policies.”

Dr. Martin urged the youths and surrounding communities to play an important stewardship role by looking after the trees and maintaining the site as a protected area for many years to come.

A Multi-City Hazard and Risk Assessments for Freetown, Makeni and Bo are close to completion. The reports will help to identify key hotspots that are highly exposed to flooding, landslides, sea level rise and coastal erosion, and provide a menu of options to manage these risks.