Socio-Economic Rights and Accountability Project (SERAP) has urged the Acting President, Professor Yemi Osinbajo, to propose a bill that would specifically regulate and bring transparency to any future presidential library fundraising process, and make public disclosure of major donations towards the establishment of any such library mandatory.

In a veiled reference to the controversial Obasanjo library, the organisation submitted: “Osinbajo should work closely with the leadership of the National Assembly to ensure the speedy passage of any such bill into law.”

In a statement made available to EnviroNews on Sunday, March 5 2017 and signed by SERAP Senior Staff Attorney, Timothy Adewale, the civil society group said: “The proposed bill would give Nigerians a better view of major donations going to presidential libraries, and provide access to information as to whether donors gain any special Aso Rock influence. The bill would minimise the potential for a quid pro quo, influence-peddling; and help to build trust and confidence among a citizenry that already questions the ethics of elected officials.”

The statement reads in part: “Proposing bill that would provide information to Nigerians and allow them to know those who help pay for presidential libraries is not only a matter of public interest but also crucially important to enhance transparency, accountability and strengthen this government’s anti-corruption efforts.”

“It’s unfair to Nigerians for a sitting or former president to raise an unlimited amount of money for a presidential library and not to have the obligation to publish information on the major contributors. Without transparency into donations, a president could potentially take an official action in exchange for or in expectation of a future donation to his or her presidential library and the public would be unaware.”

“Without openness and transparency, potential donors may seek to use library donations as a means to secure special access or political favours to authorities in Abuja.”

“The bill should also prohibit the making of a contribution through a corporation or other legal entity that may be used to conceal the identity of the person actually providing the contribution.”

“Former President Olusegun Obasanjo would serve public interest by making a voluntary disclosure of every single donation, particularly large donations, to his newly launched presidential library. This would contribute to greater openness, something that the presidential library seeks to promote about the work and achievements of Obasanjo while in government.” 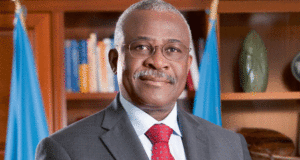