China will this week release its 13th Five-Year Plan, a new economic, social and environmental blueprint for the country’s development through 2020. 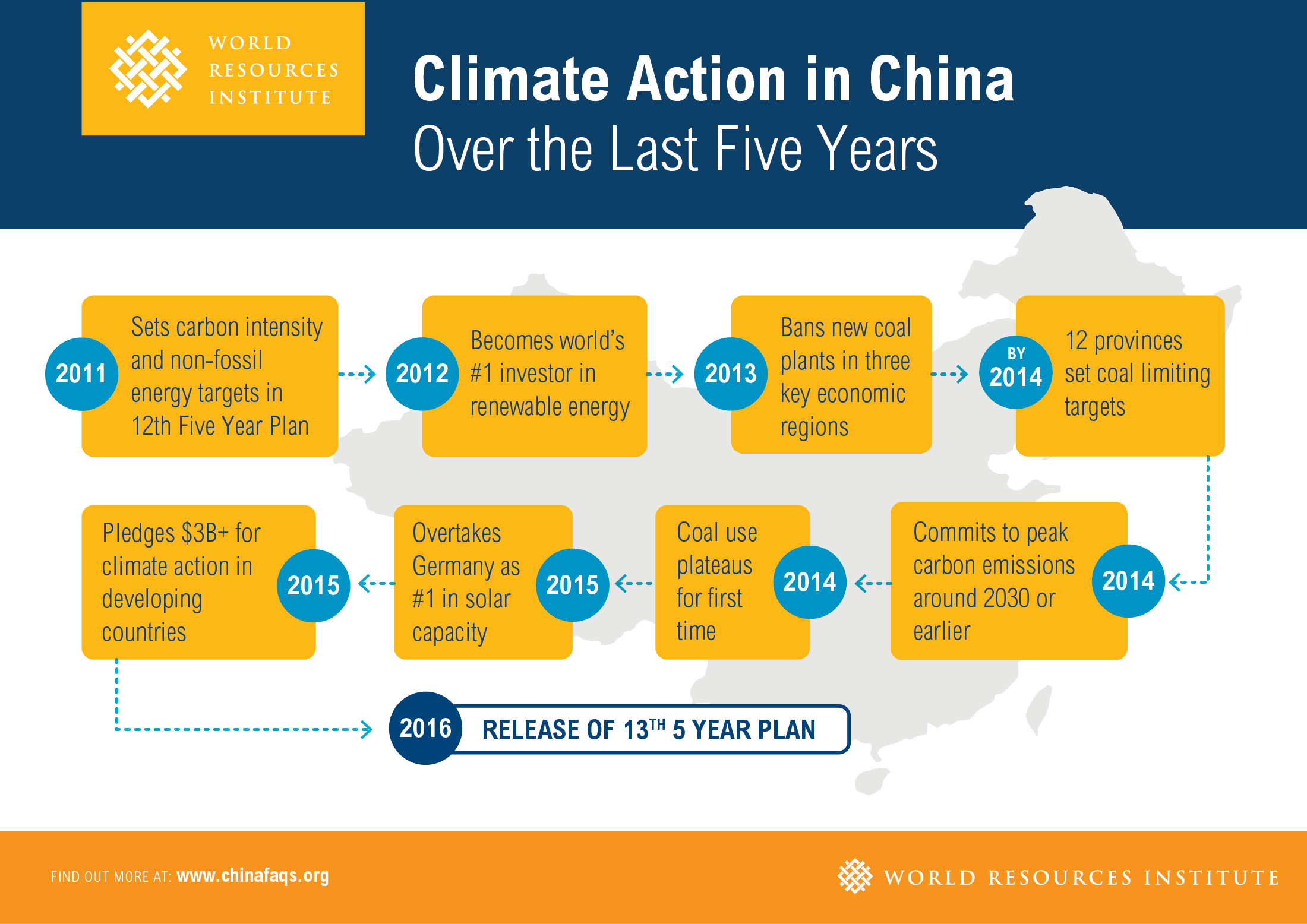 After years of astronomical growth, China’s economic expansion has begun to slow. But instead of doubling down on the fossil fuel-intensive strategy that helped produce the country’s runaway growth, China’s leaders have stated that the old growth model has run its course, and that the country will build toward a more environmentally and economically sustainable model of development. Recent signs show that the country is already beginning to shift in this direction, and the new Five-Year Plan provides the opportunity to build on that progress.

China has strong reasons for doing this, including a rising concern about climate change impacts, dangerous air pollution and energy security, along with the economic benefits of clean energy.

China has made significant strides in decoupling energy use and emissions from economic growth – as of 2014 China was on track to exceed its 2015 energy and carbon intensity reduction targets. Three key trends have emerged:

Moreover, China-U.S. cooperation on climate has become an important driver of domestic, bilateral and global action. As part of last year’s breakthrough international agreement to address climate change, China committed to peak its carbon emissions around 2030 (with the intention to peak earlier), to derive around a fifth of its energy use from non-fossil sources by 2030, and to reduce the carbon intensity (carbon emitted per unit of GDP) of its economy by 60 to 65 percent from 2005 levels by the same date.  These pledges complement the progress China is already making and set the stage for new action.

China’s 13th Five-Year Plan will be an important foundation for this new action. The 12th Five-Year Plan outlined high-level policies and set development and environment-related targets, such as those for reductions in energy intensity and carbon intensity and an increase in the share of energy used from non-fossil sources. The new plan will likely define similarly broad goals and a framework for boosting further progress.

Early signs indicate that strengthening the shift to a sustainable development path will be a key focus. In a communique issued last fall outlining the broad contours of the plan, China’s leaders stressed the importance of innovation and the role of consumption in growth. They also emphasized environmentally sustainable development and called for greater accountability for environmental damage.

Further signs of alignment in this direction continue to emerge. Recently, China’s National Energy Administration stated that it would constrain the construction of new coal-fired power plants, particularly in regions with excess capacity. Authorities have halted approvals for new production capacity and called for eliminating unneeded capacity in coal mining and steel production. Several ministries called on the financial sector to withhold finance from industrial producers that fail to comply with environmental targets and policies. Further, China’s State Council recently issued a new urbanisation roadmap calling for resource and energy conservation and environmental protection.

And finally, for China to achieve its climate targets set out ahead of COP21 in Paris, it will need to pursue stronger action in both the short and long term. The 13th Five-Year Plan and its implementation will provide early signs of how it’s going to do this.

The plan will inform decision-making at all levels—the central government, ministries and agencies, provincial and local governments, and state-owned enterprises. However, the main document is broad and high level. Finer details – in particular those concerning climate and energy – will continue to be elaborated in 2016 and afterward, as specific sector and provincial targets and plans are established and responsibilities for implementation are allocated amongst the ministries.

China has made considerable progress in recent years. Signs are good – and expectations are high – that the 13th Five-Year Plan and follow-on sectoral plans will expand the country’s environmental protection efforts and launch a new wave of climate action.

By Geoffrey Henderson and Paul Joffe

World Environment Day 2023 to focus on solutions to plastic pollution

Climate change alters the global atmospheric circulation, which in...

The Lift Humanity Foundation (LHF), an NGO, has called...

The Health of Mother Earth Foundation (HOMEF), a climate...