January 28, 2015 Comments Off on Report: Africa must embrace ‘wet markets’ as key to food security 1,526 Views

Studies find informal markets provide essential sources of food and income for millions of poor, with milk and meat that is often safer than supermarkets 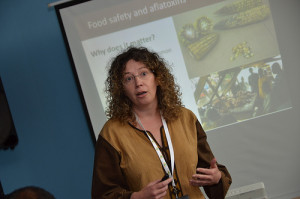 Misguided efforts to control the alarming burden of food-related illnesses in low-income countries risk intensifying malnutrition and poverty – while doing little to improve food safety. Blunt crack-downs on informal milk and meat sellers that are a critical source of food and income for millions of people are not the solution.

That’s a key finding of a new book released on Tuesday by the International Livestock Research Institute (ILRI) and partners – Food safety and informal markets: Animal products in sub-Saharan Africa – that probes the complicated world of traditional or ‘informal’ markets in livestock products. These are often called ‘wet’ markets because they use so much water in cleaning due to the perishable and often contaminated nature of the foods they sell. These venues sell most of the livestock and fish products consumed in Africa. And they are growing rapidly as rising populations and incomes drive greater demand for meat and milk.

While the food sold in informal markets is often safe, in Africa and elsewhere in the developing world, they are suspected of spreading dangerous pathogens ranging from Salmonella and E. coli to SARS, avian influenza and tuberculosis. But ILRI researchers warn that the push for greater food safety standards in these markets must be informed by an understanding of their vital role as a provider of food and income to several hundred million people who rank among the world’s poorest.

‘Our work across eight countries found that we are right to be concerned about food safety in informal markets – from milk in Mali, to fish in Ghana, to chicken in Mozambique, to beef in Kenya – particularly for spreading gastrointestinal diseases that are a leading cause of sickness and death in developing countries,’ said Delia Grace, programme leader for food safety and zoonoses at ILRI. ‘But it also shows that we are wrong to think that we can just adopt solutions developed in wealthy countries that favour large commercial operations over small producers. That will just exacerbate hunger and further limit money earning options for the poor.’

Research by ILRI and partners shows that in most developing countries, more than 80 per cent of livestock product purchases occur through informal markets – and in places where there is no ‘formal’ alternative, like a western-style supermarket, close at hand. And the studies find that this situation is unlikely to change for decades to come. Also, even where supermarkets are an option, studies in East and Southern Africa have found that, due to a poorly patrolled chain of custody between producer and seller, milk and meat sold in supermarkets may pose a greater health threat than what is sold in traditional markets.

Moreover, small producers have many attractions for poor consumers. They are typically within walking distance for people who lack cars and they offer the opportunity to purchase fresh food in small amounts—part of what is known in East Africa as the ‘kadogo’ economy. (Kadogo is street slang for ‘small.’) In addition, many sellers in traditional markets will extend credit and typically offer the traditional foods their customers prefer.

The researchers note that the poor consumers in developing countries who suffer the most from food-borne illness are often the same people who survive by selling meat and milk at the local wet market or street stall, or who depend on informal markets to supply affordable, nutritious food for their families.

‘We need to understand how much disease is caused by unsafe milk and meat in low-income countries and also how much they contribute in terms of nutrition and income’, said Kristina Roesel, co-coordinator of the Safe Food, Fair Food Project at ILRI. ‘We need to understand the complete picture so we can work to improve food safety without harming food and economic security.’

For example, in sub-Saharan Africa, one out of ten, and possibly more, cases of gastrointestinal or diarrheal diseases are caused by food-borne threats – and these afflictions rank among the top three killers in the region and are a leading cause of death for children under the age of five. Milk, meat, fish and fresh vegetables are common carriers of disease-causing pathogens. But at the same time, these foods are essential for maintaining health and proper childhood development. Moreover, around the world, around one billion smallholder farmers rely on livestock for their livelihoods, with sales of milk and meat through informal markets providing much needed income.

The main lesson from research on food safety issues in Africa, the authors say, is that in the developing world, ‘policymakers need to look to the facts, not just the fears, before moving to curtail meat sales at the local wet market or purchases of unpasteurised milk from traditional street vendors’.

‘Hazards Are Not Always Risks’

A key finding that emerges from the book is that in low-income countries, it’s important to separate potential hazards – bacteria, viruses, parasites, chemicals and toxins – from the real-world risks they are likely to present to consumers.

Data from sites across East Africa, for example, have found that the raw, unpasteurised milk commonly available from street vendors and traditional markets may contain many health hazards. Yet the actual risks to consumers may be negligible – due to the common practice in this region of boiling milk before consuming it.

In other situations, hazards are strongly associated with serious health risks. For example, the book includes a study of Fulani herding communities in Mali adamantly opposed to boiling milk because they believe boiling destroys milk’s life-giving properties. In Mali, researchers found efforts to encourage milk boiling can actually disrupt the social order of herding communities. Similarly, in Ethiopia, young men often view the consumption of meat – particularly meat from the loins, diaphragm, hump or thighs of a ruminant animal – as something that imparts strength and courage and thus, by definition, is ‘safe’ for consumption, even when eaten raw and with obvious health risks. ‘A man without a tapeworm is not a man’, said one of the study respondents.

‘Food safety policy should be guided by rigorous research to understand the ways food is produced and consumed in different societies so we can devise strategies that are most likely to reduce the risks, particularly to poor consumers,’ said Roesel.

Successful efforts to reduce food safety risks in informal dairy markets in Kenya offer evidence that analysing the flow of food products from producer to consumer can identify opportunities for effective interventions. In this instance, training informal milk vendors and offering them incentives to improve milk handling practices that can transmit diseases such as brucellosis, tuberculosis and diarrhoea generated lasting benefits worth $28 million per year.

Similarly, analysing how food moves from farm to fork along Nigerian beef chains led to effective and efficient interventions by identifying where contamination was most likely to occur. In Nigeria, butchers were found to be the hotspot for contamination. But providing training and simple technologies led to an 18 per cent decrease in unsafe meat. This in turn generated savings of $780 for each butcher trained by reducing costs of illness associated with eating contaminated meat, while the cost of training was just $9.

The study also found that most consumers using informal markets themselves care a lot about food safety. This is evidenced in their purchasing behaviour. For example, up to 40 per cent of consumers in Vietnam switch to alternative meats in the wake of animal disease epidemics. Researchers have found that poor consumers are willing to pay a 5 to 15 per cent premium for safety-assured products, and that demand for food safety increases with economic development, rising income, urbanisation, increased media coverage and education level.

Informal Markets: The Past and Future of Food Sales

Many policymakers mistakenly believe that food-borne illness in developing regions will rapidly decline as the modernisation or ‘supermarketisation’ of food sales steadily supplants informal markets. But the ILRI studies show that Africa’s supermarket food is not necessarily safer than food in informal markets and also that informal markets are unlikely to disappear – and could even become stronger – in the coming decades.

Indeed, the research shows that consumers prefer informal to formal markets, and not just for their lower prices, but also because traditional markets tend to sell fresher food. They also sell local products and breeds, which many consumers continue to prefer – and those preferences seem to intensify as incomes rise. For example, in Africa and Southeast Asia, consumers often prefer local chicken breeds over cheaper imported breeds.

‘Informal markets are growing, not shrinking, across the developing world and in many ways mirror the “locavore” trend occurring in wealthy countries,’ said Grace. ‘If we are going to improve food safety in these markets, we need policies that are guided by an understanding of producer and consumer behaviour, local diets and customs, and interventions that can reduce illness without imperilling food security or increasing poverty.’