Over three million children of between ages zero to five years are being immunised against polio during the Immunisation Plus Days (IPDs) that commenced March 13 and ends March 18, 2015 in Kaduna State. 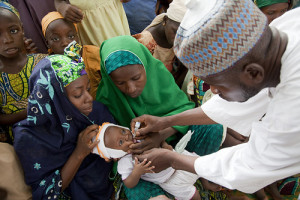 Secretary of Journalists Against Polio (JAP), Kaduna State Chapter, Alhaji Lawal A. Dogara, said 86 health camps in 16 local government areas (LGAs) have been set up for distribution of free drugs.

According to him, executive secretary, Kaduna State Primary Health Care Agency (SPHCA), Dr Sufiyan Mu’awuyya Babale, had urged the parents to give all the needed support to ensure no child is left out.

He assured that all required arrangements had been concluded to ensure eligible children were vaccinated, saying that the Agency had already distributed vaccines to all the LGAs for the exercise.

Babale commended the effort of traditional rulers and religious leaders and urged them to redouble such effort for the progress of the exercise.

He also commended the development partners for their giant stride aimed at ensuring the eradication of polio in Nigeria.