The theme of previous observance of the Ozone Day on every September 16, particularly that of 2017, “Caring for all life under the sun’’, has clearly stated importance of the ozone layer to the life on earth. 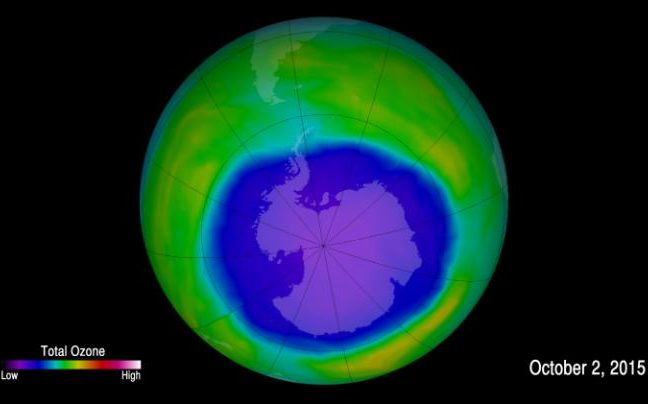 The hole in the ozone layer has shrunk by more than 1.7 million square miles since 2,000, according to scientists. Photo credit: NASA GODDARD

Scientists posit that the layer was formed in the atmosphere around five hundred million years ago when it accumulated enough of the oxygen because of the photosynthesis to protect life under the sun.

Some scientists also observe that the theme of the 2018 Ozone Day – Keep Cool and Carry on: Montreal Protocol – is apt as a follow-up campaign in sensitising the world to the need for moderating human activities to protect the ozone layer.

Observers note that the sensitisation will be useful in that regard since the scientists have proved beyond doubt that ozone layer depletion – the wearing out of the amount of ozone in the stratosphere – is caused by human activity.

Scientists also argued that high above the ground, between 15 kilometres and 30 kilometres, lays a thin layer of ozone that absorbs direct sunlight to protect everything and everyone on the ground from exposure to the harmful direct sun radiation.

According to their findings, industries that manufacture goods such as insulating foams, solvents, soaps, air conditioners, refrigerators and some food containers emit chlorofluorocarbons (CFCs) that later store up in the stratosphere to affect the layer.

They argue further that human-produced chemicals are responsible for the observed depletions of the ozone layer.

ALSO READ:  Nwajiuba: How to prepare for 2013 rains

In his view, Mr Abayomi Oguntunde, Director of Bio-resource, Federal Ministry of Science and Technology, observes that human activities that involve the emission of fluorine, bromine, chlorine, carbon and hydrogen among others, can deplete the ozone layer.

The director said that knowing how to prevent ozone layer was important to save lives and secure clear atmosphere.

He suggested an energy efficient model when buying a refrigerator, pointing out that less CFCs would be released when fridge wear out.

“Ensure your car’s air conditioner is carefully serviced; go to a service station designed to recycle the refrigerant, otherwise, the CFCs will be vented into the atmosphere.

“Don’t use foam plastic insulation in your home, unless it is made with ozone safe agents; use fiberglass, gypsum, fiberboard, or cellulose insulation instead and don’t buy a halon fire extinguisher for home use.

Similarly, Prof. Babatunde Rabiu, Director Centre for Atmospheric Research of the National Space Research and Development Agency, pleads with the Federal Government to implement acts that are designed to protect the environment.

He said that diverse anthropogenic activities have contributed to the pollution of the environment, including the depletion of the ozone layer.

He explained further that the ozone layer is a region of the atmosphere that surrounds the earth and contains a particular gas known as ozone.

According to him, fossil fuel vehicles, bush burning, gas emissions especially from heavy industrial areas are all factors that pollute the environment and the loss of the ozone layer.

Rabiu said that the sun continues to emit radiation from time immemorial but human activities and technological advancement have continued to affect the ozone layer.

“Some of the gases that emitted on earth by our anthropogenic activities, human activities and incomplete combustions, affect the ozone layer.

“When these gases get to the top, they react with ozone gases and convert ozone molecules to ordinary oxygen and they are radicalised.

“When this happens, we lose the concentration of ozone in the atmosphere and so the protection that ozone offers the earth will begin to lose its value at that level.

“This is why the region is very important to us; it is a natural region in the atmosphere that protects the earth from receiving direct radiation which comes from the sun.

“We have to start thinking of the eradication of vehicles with incomplete combustion, indiscriminate burning of tyres and bush should also be stopped.

“Gas flaring has to be stopped in the Niger-Delta region, the use of stove for cooking has to reduce, the government needs to come in and see how they can reduce usage of firewood for cooking,’’ he said.

He observes that direct radiation of the sun on the earth could be harmful to humans which could lead to tanning of the skin and aid skin cancer.

Rabiu further insists that the government and stakeholders in the environment sector have the responsibility of sensitising the public to the need to protect the environment.

He says that that there is a need for the country to consider a ban on fossil fuel cars with incomplete combustion as it is being considered in some developed countries.

But Mrs Adenike Aluko, a public health officer in Osun, calls on the Federal Government to invest more on the development of renewable energy technology to further reduce the effect of climate change.

According to her, the use of alternative energy, such as wind, solar and geo-thermal energy is healthier than fossil fuels because of the emission of carbon monoxide to the environment.

“Investing in renewable energy technology would be a right step in achieving Sustainable Development Goals.

Aluko further urged well-meaning Nigerians to partner the government in ensuring steady funding of research on new measures to mitigate the impact of climate change.

“Without proper funding, science and technology sector cannot progress and such funding ultimately comes from the society that will reap its benefits,’’ he said.

The world agreed in Montreal in 1987 to do something about the depletion of the ozone layer and in 1994, the UN General Assembly proclaimed September 16 of every year to be the International Day for the Preservation of the Ozone layer.

Scientists have also, recently, announced that the ozone hole, which has been growing since it was discovered in 1985, may have started to shrink.

According to them, if the actions of humans have brought about an ozone layer healing, the international community has proven that it can solve serious environmental problems when everyone works together.