April 12, 2016 Comments Off on Oil and power: Groundwater pollution in South Sudan 1,864 Views

“Oil, Power and A Sign of Hope” is a book about oil, speed, corporate power and death. It is not about the oil pollution in the Niger Delta. It is rather about the severe pollution of the groundwater in the oil field communities of South Sudan. And the pollution is from the contamination of the water bodies by produced water that is generated during crude oil extraction. 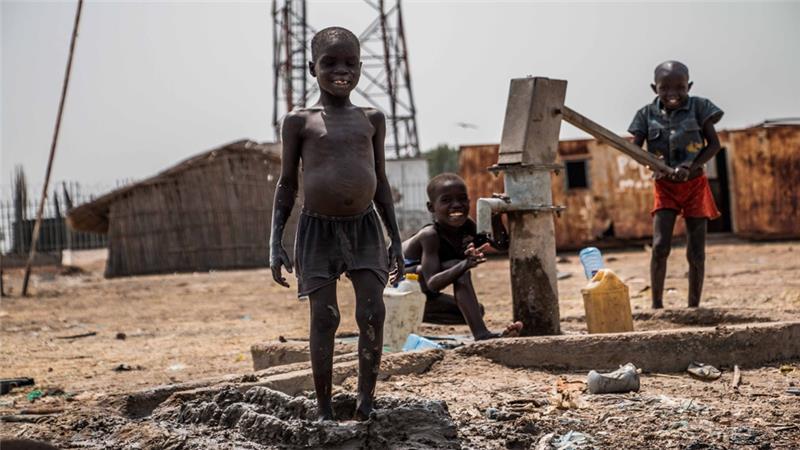 It may well be true as has been asserted by some observers that the Sudan was split in two by oil. The fact that oil is at the centre of geopolitics, of global dominance and control is indisputable. It is also a fact that crude oil’s footprint on climate change cannot be denied. In fact, analysts have concluded that the world has to completely halt the burning of fossil fuels by 2030 if the target of keeping to a 1.5-degree Celsius temperature increase above pre-industrial level, a highlight of the Paris Agreement, is to be met. The control of global policy on climate change by the fossil fuels industry is so strong that this known villain is not mentioned even once in the Paris Agreement that the politicians have applauded and are getting ready to sign in a few days.

Written by Klaus Stieglitz (with Sabine Pamperrien) and published by Ruffer & Rub, the book, Oil, Power and a Sign of Hope, raises very strong issues regarding the linkage between oil corporations (in this case Petronas), automobile corporations (in this case Mercedes) and the destruction of lives in the oil fields of South Sudan. Mercedes and Petronas are partners in the Grand Prix events with their logos announcing their wedlock.

Written with deep compassion after spending many years providing humanitarian service in the polluted communities, the writer exposes the misery and harm that oil field communities are exposed to while corporations enjoy extreme wealth while feeding the world’s insatiable thirst for energy, speed and profit. It shows that produced water and drilling fluids are key sources of contamination of the water communities depend on.

An excerpt from the book is in order here:

The extremely great potential dangers emanating from the use of chemicals in drill drilling fluids cause it to be strictly regulated by internationally-applicable guidelines. Augmenting this peril is another technique employed when extracting oil. Highly-concentrated salts-containing solutions are injected into the oil deposits, so as to increase the pressure in them. The crude oil and the previously-injected salts-containing solutions are pumped to the surface, where the crude oil is separated from the so-called “produced water”. The extraction of each litre of crude oil requires the employment of from 3 to 9.5 litres of produced water – an incredible amount. This produced water often has a higher content of salt than does ocean water. The produced water also often contains noxious metals and radioactive materials. The general practice is to inject the produced water – via another injection hole – deep enough into the ground, with this meaning its being transported to layers of rocks that are far away from potable water. Should, however, the produced water be disposed of via in-feeds into surface waters, or via shallow drilling into layers containing ground water, the risk arises that this polluted water will – via wells – be incorporated into humans’ food cycle. (Page 58)

Oil, Power and a Sign of Hope is a wakeup call, not only for South Sudan, but for all African nations where crude oil is extracted or is set to be extracted. While oil spills and gas flares take the headlines, little is said about the produced water that finds its way into our food cycles and silently breeds disease and clips off life expectancy in our communities. This book is not written to make us moan and sigh. It is a clarion call for us all to wake up, reject mindless exploitation, demand justice and fight for the right to potable water, and for the right of all peoples to live in dignity and in healthy environments. The water we drink should quench our thirst and not snuff out our lives.